This release comes from extensive sampling of crops entering the market during 2012. Here is the official summary statement from the USDA:

"The Pesticide Data Program provides reliable data through rigorous sampling that helps assure consumers that the produce they feed their families is safe."

And the official statement from the EPA:

"The newest data from the PDP program confirm that pesticide residues in food do not pose a safety concern for Americans."

For the agricultural community, particularly those involved in the production of fruits and vegetables, this USDA program is sort of a report card - like a grade to you get for a "group project" of epic proportions.

Imagine you are back in school. You are part of a huge group of fellow students only a few of whom you know, and many of whom are in different countries around the world. The grade that you will receive is based on the work of a random sub-set of these students.

All that you can do is try your best and hope that everyone else does the same. Under those circumstances, it would be a great relief to find that your entire group did such a good job that their collective score was 99.5%! That is an A+ by any standard.

That's what just happened again for the farmers who produce our food. This isn't the first time.There is a great website that allows you to visualize the data from all the years the PDP has been conducted.

What The Data Says

The pesticides used in modern agriculture are now dominated by products which are far less hazardous than what most people imagine.  The use of all pesticide products is highly regulated, and in order to use them, farmers have to qualify for a license and must take continuing coursework to maintain their right to use them.  They are required to adhere to the detailed label restrictions for every product in terms of how much can be used and how long before harvest.  Those label rules are based on an elaborate risk analysis that the EPA performs for each product.  That analysis reflects information about toxicology, metabolism and environmental fate which is generated for each product at a cost of many millions of dollars.

Based on all that information, the EPA sets a "tolerance" for each product specific to each crop on which it is allowed.  If the pesticide residue level on a crop is at or below the tolerance, it has something like a 100-fold safety margin for consumption by us, the consumers.

So what matters with pesticide residues is not simply whether or not they can be detected with the enormously sensitive laboratory methods available today, but exactly which chemicals are involved and at what levels relative to the tolerances. 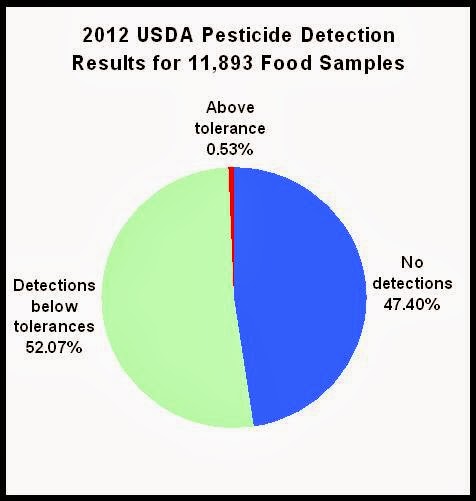 So how did farmers do for the 2012 crop when it comes to residues relative to tolerances?

They did great!  Of the 11,893 food samples tested, 99.47% had no chemical residues above tolerance.  47.4% had no detectable residues at all, but for the rest the levels were often far below the tolerances.

Most crops tested in 2012 had NO samples with over-tolerance residues.

I hate to be like the parent who sees a report card with all As and one B+ and focuses on the B+, but it is interesting to see what was going on with the half of one percent, or 63 of nearly 12 thousand samples that had residues which were over tolerance.  There was only one sweet pepper sample imported from Spain that had such a residue. There were two samples of summer squash from the US with residues slightly above the tolerance. There were four samples of winter squash, two from the US and 2 from Mexico, which had higher than tolerance residues.

The only crops with any significant number of above-tolerance detections were snap peas (32 from among 743 samples) and cherry tomatoes (24 from among 744 samples).  However, even these unusual incidences were not enough above tolerance to be of major concern. For the snap peas, 97% of the samples with those higher detections were imported either from Guatemala, Peru or Mexico.  For the cherry tomatoes, 83% of the above-tolerance samples came from Mexico.

If the "group project" was divided into a US farmers team and a importers team, their respective "scores" would be 99.88% and 98.76% - different, but both still A+ grades.

For just over 4% of the 2012 samples, very low levels of pesticide residues were detected for materials that didn't have a specific tolerance for that crop.  This can happen because of spray drift or contact with equipment after harvest.  The levels were too minor to be of concern to the regulators.  Similar, low level residues are found on organic crops.

In a recent pesticide residue study in Canada, synthetic pesticide residues were detected on more than 40% of organic produce.  Similar results have been seen for organic in the US in the past. Again, these sorts of very low level detections for organic or non-organic crops reflect mainly the sensitivity of analytical lab methods - not any real risk to consumers.

As in previous years, this survey documents the fact that our food supply is extremely safe, and that no one should hesitate to enjoy it based on worries about pesticide exposure.

Rain On The Parade Is Predicted

Unfortunately, we can expect that once again, the Environmental Working Group will take this transparent source of public information and intentionally misconstrue it to generate their "dirty dozen list."   They ignore the transparent public data about which chemicals are found, at what levels, and how that relates to the tolerance.

The EWG ignores those critical details, because to do so suits their agenda of scaring people into purchasing organic (They fail to mention the studies showing similar residues on organic).  If things go as usual, much of the press, blogosphere, and organic advocacy community will uncritically re-transmit the EWG's distortions.

The effect can be that many innocent consumers will either avoid health-promoting food options, pay a price premium for organic, or feel guilty about not doing so.

That would be sad.  In fact, this new USDA data shows that the diverse collection of farmers who produce our food deserve appreciation for their care in controlling pests in a way which is also safe for us as consumers.  The truth is that consumers deserve to enjoy what those farmers have produced without fear or guilt.