A couple of weeks ago I was deeply disappointed to read that the USDA might get involved in an aspect of “non-GMO food labeling.”

The marketing of non-GMO food is an opportunistic, fear-based phenomenon – not something worthy of aid from a science-oriented agency like USDA.

Also, if the goal is to allow consumers “know more about their food,” then why not transmit knowledge with context and perspective that would diminish, rather than promote, superstition? Printing was state-of-the-art in 1435.

We can do better in the 21st century!

It may seem extreme for me to declare that the fear of GMO foods is a superstition, but consider the history of this phenomenon.  For two decades, the opponents of crop genetic engineering have promoted the idea that transgenics, a particular means of genetic modification, is something sinister and frightening.

Their arguments are typically accompanied by emotive images such as hypodermic needles full of colored liquids protruding from ripe fruits and vegetables.  Such images bear absolutely no connection to the actual process of plant genetic engineering.

These websites don’t communicate the fact that virtually all crops have been “genetically modified” in many ways for centuries and that transgenics have been the most carefully introduced and independently tested of all.

Although all of the major scientific bodies around the world have affirmed the safety of “GMO crops,” the fear-based messaging has worked. This has created an up-selling opportunity in the food industry, and that kind of marketing is well served by the two word message, “non-GMO.”  The seller can tap in on all the emotive, doubt-sowing efforts to date without any potential confusion that would be created by knowing the full story.  It’s effectively a “right to not know.”

In an era of scan codes and smart devices, a curious consumer could have all the resources they need in an interactive, multi-media form.  They could ask: “What are the ingredients in this food?”  “Where has it been sourced and why?”  “What is known about the safety of the ingredients and the food as a whole?”  “What does the nutrition labeling information on the back mean?”  “What kind of farms and farmers were involved in the production of this food?”  “Why do farmers choose to use certain agricultural technologies?”

Consumers could “know” a great deal.

A Suggested Role For USDA

The drawback with this is that as with all information available today, it is very hard for the consumer to sort out what is true.  Here is where a public agency with extensive expertise in the practice and science of agriculture could play an appropriate role.  They could be an independent “third party” that could vet the information offered via 21st century methods.  To do so would require more resources for the USDA because their workers are already engaged in other important work.  As consumers, we would be better served by a modest increase in USDA funding via our taxes than by spending billions on “GMO-free” food marketed based on superstition. If you have not heard it in a while listen to Stevie Wonder’s classic song, “Superstition” , particularly the repeated lyric: “When you believe in things that you don’t understand, then you suffer... superstition ain’t the way.”

Now imagine the lyric, "When you're afraid of things you don't understand, and you pay more... superstition ain't the way." 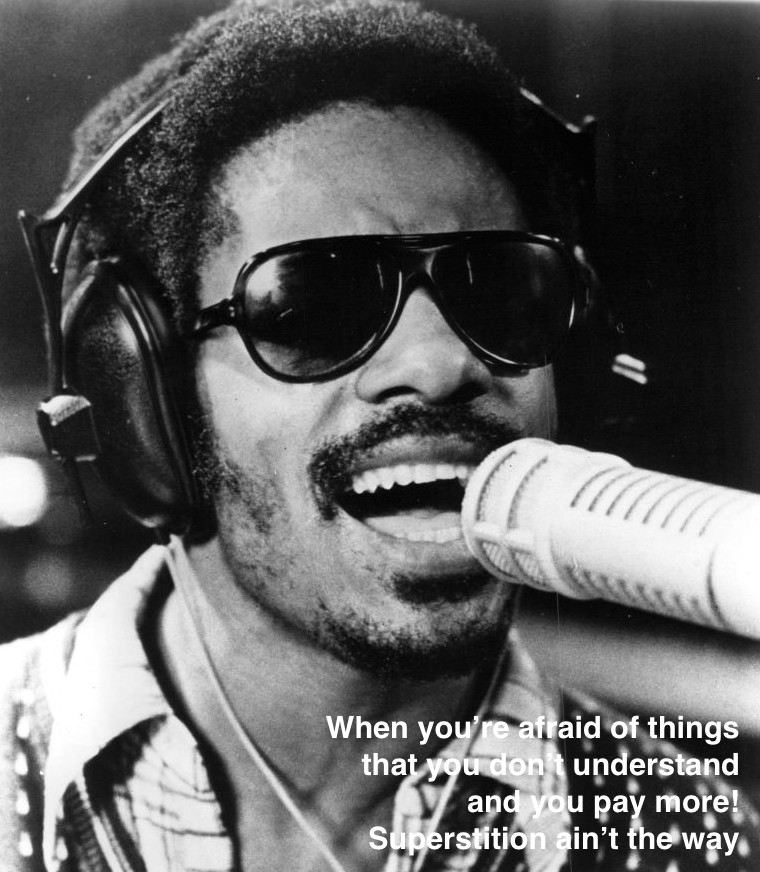 You are welcome to comment here and/or to email me at savage.sd@gmail.com. Also posted on Forbes, 5/28/15