Home > Random Thoughts > It's All About Perception

I was not supposed to start this piece using the pronoun ‘I’.

But, I did it on purpose anyway. I wanted to remove all pretense to being a captain of normalcy as fast as humanly possible. Put it this way: if the rules of writing were really that important, then how come the people who teach them are not known for being great writers themselves? 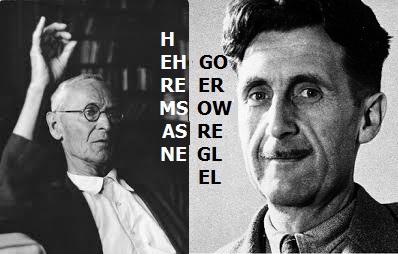 Instead, as per the example of George Orwell, or Herman Hesse, or maybe the named but largely unknown authors of the ancient Indian Vedas, great writers would more likely dedicate themselves to a life of contemplation, meditating, sitting high atop a snow-covered Himalayan mountain, even in the middle of the city.

Not teaching the rules of writing. This Vedic hermit in the city would also have the nerve of a starving artist, the acumen of a scientist, the desire to record knowledge faithfully like a medieval scholar. Many great writers, like Hesse, have spent time in a sanitarium. In the old days, that was part of the criteria for being considered a genius if you were European. He probably ended up there because he admitted to not needing the rules of writing. Above all, a great writer, like Orwell, must be a person who has slaked their thirst for learning and wisdom with years of self-denial, and who would therefore find themselves writing for the tiniest reason. They will write for no one, imagining instead an audience of people living in the future, who have no connection to the present, who have accidentally discovered this lost document buried in the anonymous realms of a vast desert, and upon opening it, suddenly discover something they have been waiting to read.

The art of great writing is built out of this ability to write to the future, for an audience of people not yet born, knowing full well they will have the experience of marveling at how the newly prized discovery, this long lost writer from the past, was writing for them all along, and now they are celebrating their discovery. Once an endless feedback loop of a-ha experiences spanning lifetimes has been set up, both writer and reader participating in it will have experienced a dialogue with someone who is not alive. And it was all set off because the writer suspected it might happen. Whether it is the authors of the ancient Indian Vedas, Herman Hesse, or George Orwell, we all have our favorite writers, and when you read this kind of work, you feel like it was written for you.

When you think you really get what is being written, then it’s as if it was written to be read by someone just like you. In other words, no matter how many people say it is great writing, the writer is not writing for a real-time audience exactly. Books are usually read one person at a time. It’s more like the great writers are writing on behalf of eternity - writing to wring the eternity out of a moment in time. You were lucky enough to hitch a ride with the writer. The writer was lucky enough to hitch a ride with you. Now this feedback loop is set up. But it didn’t have to be.

What were the odds of that work being written, and then much later, you finding it, picking it up, reading it, and getting it? Since the written word outlives the writer, the writer has a chance to face eternity and enter into it. That is why the writer in their time, and the reader in their time, are joined at the hip and the heart by some colossal, unlikely event - a sacred coming together across lifetimes, in a way that defies rational explanation, and yet it carries the ineluctable imprimatur of one of those greatest things life has to offer. This is the art of great writing. It has little to do with this world.

It has everything to do with defying this world and accessing eternity through some kind of Orwellian, Hesse-type, Vedic magic trick with inert words on a page. But it can happen. Writers who are good, and who have success in their lifetimes, are a fortunate few, and writers who are good, and make fortunes writing in their lifetimes, are liars. But great writing is just hovering there in space ... like Orwell, Hesse, the Vedas ... they face the great proving ground of time - with no fear at all.

Every great artist knows they have to find a way to create something that is a little larger than life, yet the artist’s greatest contribution to their art, is their own death because nothing quite immortalizes the writer in the same way. When you read something written by a person who has passed over, and when you are told, or maybe you just recognize, that it is a piece of great writing, then you have a private experience of humility that is hard to surpass. You feel lucky to be connected to the ideas of a person, like Orwell or Hesse, who is long gone, yet whose life gave up some gasps of wisdom, and now you are sitting here in your time of living, and you are receiving the benefits. You feel small and lucky in the face of such mortality and brilliance.

At the same time, when you read Orwell writing about the future, or Hesse writing about the past, you feel special and lucky to be lifted up and connected with this spirit from a bygone age who is explaining the present to you, right now. And now you are having a spiritual experience. Great writing gives the reader a quick, silent experience of humility and a sense that this convergence was meant to be - how else could you explain this person writing and passing on a long time ago, and now I am sitting here reading what they wrote? Maybe it was meant for me - and it may be received as a cosmic experience. It may also be received as an intellectual experience, or an emotional experience, or some kind of philosophical or aesthetic gift from a higher plane. You could not even have a great civilization unless people were having this experience.

This is the quintessential experience, to read great writing by someone who is good and gone, that enlightens and connects one more and better to life in the here and now, than anything else has lately - this is what it means to be truly civilized. If you lived in a world where this could not happen, then wherever you might be, and whatever society you were living in, it would not be capable of calling itself a great civilization until it could boast great tomes of writing, accumulated over expanses of time, bringing people together, uniting past to present. Bad writing has the virtue of being easy to spot, and that makes it easy to jump ship. The real problem is good writing - this is where hell lives and breathes. It’s everywhere, unavoidable. It is professional, formal, and cantankerous, like academic writing, or it might be cute and garrulous, like internet writing. It’s boilerplate, and template for a cookbook recipe instructing and guiding you every step of the way. It is part of professional life, and there are few people who pride themselves as much as people who crank out good writing.

Yet, if all good writers were lined up tonight and summarily disallowed from ever writing again unless they used a quill feather pen, and wrote on parchment, by lantern or candlelight, most would quit, and we’d be no worse off. Of course, like a fungus, a new generation of professional, good writers would naturally fill up the space.

Put another way, good writing is like a story that inspires a screenplay for a movie, while great writing is like watching that movie in a theater, with someone special, who reaches over taking your hand halfway through, and the two of you sitting there, holding hands, for the rest of the movie, not caring when it ends, sharing the story, in silence, just living out this eternity, forever.