15.   10 points for each statement along the lines of "I'm not good at math, but my theory is conceptually right, so all I need is for someone to express it in terms of equations".  …

18.   10 points for each favorable comparison of yourself to Einstein …”

M. J. Duff, writes in String and M-theory: Answering the critics (an interesting paper that I almost fully agree with):

“Of all the intellectual disciplines, theoretical physics is one of the toughest in which to gain expertise, requiring years of dedicated study and a firm grasp of higher mathematics. There are no shortcuts. … every few days I receive an email … promoting their own theories of everything … . It may be a truism that all great ideas in science seemed crazy at the time. Unfortunately, the converse is not true, so it’s a case of hitting the delete key.”

Let us consider these statements by those two well respected researchers at the cutting edge of fundamental physics, but let us consider them as if they are messages from the future, as if we are to decide whether the earth or the sun is best to be taken as the center of the planets' rotations - yes, the sun - what a crazy, godless idea. Surely, we should take messages from advanced future scientists who know the correct answer very seriously.

So here is the setup as it was back in the old days: The earth is quite firmly established as the center not only by what seems to be quite obvious to everybody – just open your eyes and see it all going around us once a day. Also the smartest established geniuses of mankind agree, and they can also quite successfully describe the Retrograde Motion of the planets relative to the star background.

Epicycle theory described best why the planets seem to stop sometimes to then move backward for a little while. It is quite complex: Epicycles were at the cutting edge of mathematics. They are not just more complicated mathematically than circles. They are more complicated than ellipses, and ellipses take a central role only in the heliocentric description of the future. Can you write down the equation that describes an ellipse? I mean not just now as you read this, but if you were whatever equivalent of what you are today, but back in the time when epicycles were the cutting edge of science?

Here is what Baez and Duff claim: In order to be able to contribute to the next step, the true understanding of celestial mechanics, you need to not only know all the epicycle theory mathematics very well, but much more difficult mathematics than that, because the most clever guys already know all the epicycle mathematics, but that is still not enough mathematics to understand all the difficult motions of the planets and moons and stars around the earth. Taking the future scientists' advice, we will not look at your theory if it is not brimming with equations, because it is obvious that if you do not know mathematics and display that skill at every turn, you are a case for the delete button.

Now let us go ahead perhaps three hundred years. We know that the sun is actually in the center of the solar system and that planets rotate around the sun. A new paradigm: heliocentrism. I can close my eyes and see the apparent retrograde motion as it happens inside my head; it is fully explained by the simple fact that the sun is in the center. I am sure many of you can imagine this, too, and if not, you are all able to see it if somebody draws it for you: How much mathematics do you need to understand it, and not just it, but the most fundamental core of it, namely that the sun is in the center? Do you need to be fluent in something more complicated than epicycle theory? Do you need to even know the formula for a circle, let alone an ellipse? You understand it better than the smartest mathematician trying to advance the cutting edge of science back in the past, and yet you need to know no mathematical equations at all!

Here once more what cannot be repeated often enough in this context: Einstein was not a great mathematician! He was not a dummy with math either of course, but he was neither great with math (compared to other physicists at the time), nor did he like it. He liked metaphysics, and that is what made him the greatest scientist. Metaphysics in form of philosophical considerations (yet also at the same time hands-on-practical considerations) has always been the driver of cutting edge physics. Einstein did not enjoy maths, and he bothered with Riemann’s difficult mathematics only after he realized in 1907 that if he falls freely in a gravitational field such as when an elevator’s cable breaks, he would not be able to feel his own weight. He recounted this realization of the equivalence of gravitation and acceleration as the happiest moment in his life because knowing special relativity, the equivalence principle is obviously the key to including gravitation into relativity theory. Especially with quantum mechanics firmly established today, those who count metaphysics only toward philosophy do simply not understand physics.

Today, science has become somewhat of a religion (yes it has; go look up what is a religion!), and the high priests tell us to get in line, to support a position that conveniently supports precisely what they are doing, that gives them the respect they demand, regardless of that they have not made much progress on understanding the nature of quantum theory. Much like back in the past, when the central position of the sun was actually already obvious for hundreds of years (!) to many sailors and other low-life far below the elevated intellectual establishment of the time, also today we see that certain long since obvious facts are simply denied by a surprisingly large fraction of the established scientific cummunity, facts such as that “realism” is not only theoretically known to be nonsense for more than half a century due to relativity and quantum theory (much longer if counting philosophers), but also shown to be wrong by empirical science for many years now (see EPR experiments!).

I claim for some years now that understanding the necessary new paradigm does not involve mathematics! I know the mathematics of string theory and general relativity and have published on them; I know the mathematics of quantum theory and have published on it. I have constructed quantum black holes in spaces with two time dimensions, a work that was even plagiarized and published. I have published, and by published I mean of course peer-reviewed established scientific journals, on highly non-trivial statistical mathematics such as the mixing of probability distributions. If I were a crackpot, I would probably try to use all of that mathematics in order to impress with how "scientific" my theory is. However, I do the precise opposite. I am the worst crackpot of all according to Baez and Duff and many others, because I stand here today with all confidence and exclaim: If you want to understand quantum mechanics, especially how relativity and quantum mechanics hang together, you need to forget mathematics for while and put on the philosopher's hat!

My theory, which is summarized for a wide, semi-scientific audience here, of course needs some mathematics (see here), but as you will see, and as I hold it to be true for all advanced insights that can be called 'paradigm', the mathematics necessary is on the high school level. Otherwise, “if you can’t explain it simply, you don’t understand it well enough” according to Einstein, the guy who results in 10 points from the crackpot index for each favorable comparison of myself with him, so let’s get some more points by quoting something similar I wrote:

Why does this perfect physics instructor suicide work? And please, NO MATHS! I want a "philosophical" answer that shows deeper insight into physics – math trickery is for those who can’t do any better.

John Archibald Wheeler results in no points, but he also wrote: 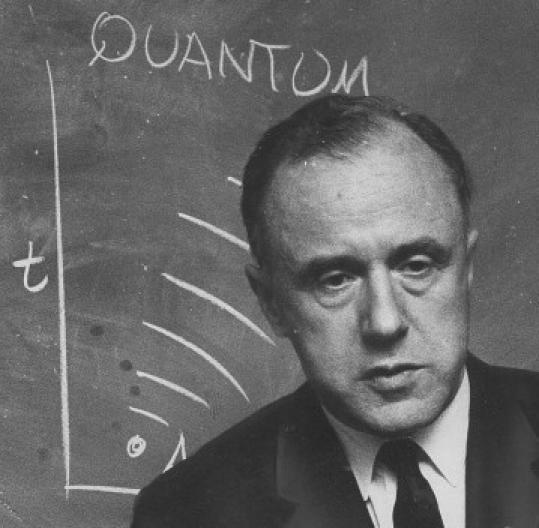 You can email John Baez about this at baez@math.ucr.edu, which you should do, because according to his index, we get “20 points for emailing me and complaining about the crackpot index.”

Baez' index has been well answered also by the The Anti-Crackpot Index. Baez writes for example

“37.   50 points for claiming you have a revolutionary theory but giving no concrete testable predictions.”

Duff writes similarly “Who can dispute that the ultimate goal of a scientific theory is to make experimentally testable predictions?” The Anti-Crackpot Index answers reasonably enough with

The scientist answers instead 'on the next level', namely with that The Theory of Everything is Not Empirical Science; it likely makes no testable predictions!