Michael White
You're living as part of a small band of hunter-gatherers 30,000 years ago in what will later become France. How do you explain the fact that a stone, when dropped, falls to the earth? How do you even begin to think about gravity?

People sometimes wrinkle their noses when, in the context of explaining the meaning of the word 'theory' in science, you talk about the 'theory of gravity'. Gravity is a fact, isn't it? But from our 21st century perspective, we take too much of 2000 years of theoretical developments for granted. So try to imagine how you would even begin to think about gravity if you were living in a cave 30,000 years ago.

Or how about 350 BC? Compared to how Cro-Magnon man might have thought about gravity, Aristotle's views were very sophisticated. Objects fall because they all have an inherent tendency to seek out the center of the earth. Heavenly bodies have another tendency - to move uniformly in perfect circles.

This is not an unreasonable assumption when you watch what happens in the sky at night: 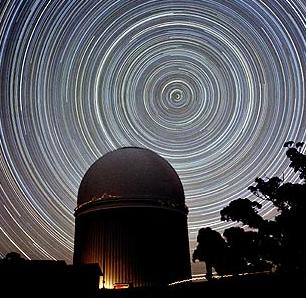 This theory wasn't very satisfactory, especially for astronomy, because it didn't explain the observations very well. To explain the complicated motions of the planets by invoking uniform, perfectly circular motion, people invoked epicycles, or superpositions of perfect circular motion.

Today we snicker and think, 'epicycles, right, how quaint those pre-moderns were!' We see epicycles as an elaborate effort to prop up a creaking philosophical system. But epicycles were a reasonable solution, as Jeremy Bernstein puts it (in Einstein, Chapter III, from which most of the following summary and all of the quotes are taken):

A modern scientist would call this data-fitting the expansion of the observed orbital motions in a Fourier series, after the early nineteenth-century French mathematician, J.B. Fourier, who showed that any regular periodic motion can be construed as a superposition of uniform circular motions, perhaps an infinite number of them.

Epicycles were just a crude form of Fourier analysis.

Copernicus discovered that if he changed the frame of reference of the planetary motions, so that the sun was at rest and the planets moved about it, he could simplify the superposition of circular motions... (in modern language, to simplify the Fourier series)...

Copernicus found a simpler model that fit the data. He still believed strongly in uniform circular motion, but even a shift in the frame of reference was too radical for his contemporaries. Sure, a heliocentric model was simpler, but that didn't make it right.

Some decades later, along comes Kepler, who has access to Tycho Brahe's large collection of painstakingly obtained data. Kepler came up with an even simpler model to fit the observations of planetary motions: instead of a Fourier series, you can invoke just an ellipse:

This was an enormous liberating step in the history of scientific ideas, but we must be clear, in order to understand the contribution of Newton, what it did not accomplish. Kepler's result was essentially an empirical observation. It had little predictive power. There was no way, for example, to account for why the planets moved in an ellipse or why other objects, like projectiles, did not.

Galileo took the next step, explaining the motion of projectiles with the concept of inertia. As Bernstein relates:

According to Aristotelian physics the maintenance of an object in motion required the continuing action of what we would now call a force. This idea was abstracted from the common-sense experience that if we wish to push an object along the surface of the earth we must supply a force to keep the object moving.... Galileo had the insight to imagine a situation in which all of the effects of friction could be removed - a very smooth surface like ice - which would have the property that once an object was set in motion, it would keep moving essentially indefinitely until a force was brought into play to alter its motion...

The role of force is to change the state of motion, or to produce what we would now call an acceleration. This was a very important observation and one that contradicted and replaced the erroneous Aristotelian analysis of forces and their relation to motion.

On to Newton, who, with the invention of differential and integral calculus, could write a quantitative relationship between force and acceleration in the form of a linear differential equation. (We've now come a long way since Aristotle's non-quantitative approach.) Newton could now explain both planetary orbits and the trajectory of a thrown stone by invoking two core principles: every mass in the universe exerts a force on every other mass according to Newton's equation for gravitational force, and force is related to acceleration by the equation F=ma.

From this, "Newton was able to show, with his expression for gravitational force, that the only possible particle orbits for one particle moving under the gravitational influence of another... are conic sections: ellipses, hyperbolas, and parabolas."

(Bernstein notes that Aristotle's version of this equation would have been F=KV - force is equal to velocity times a constant. No force, no velocity.)

This history is awe-inspiring. 30,000 years ago, our ancestors had absolutely no reason to think that there was a relationship between the behavior of spear tossed at a wooly rhino and the motions of those lights in the sky. They had no way to even begin to think about the phenomenon of a falling stone in any sort of quantitative or systematic way, and most of them probably didn't even realize there was a question to be answered. We tend to take the world we live in for granted.

Our understanding of gravity, as obvious as the phenomenon may seem to us in hindsight, has a tremendous amount of theory behind it, and even taking the first step towards a scientific understanding requires some radical thinking. We shouldn't snicker at Aristotle for saying objects fall towards the earth because they have an inherent tendency to move towards the center of the earth. At first glance, that seems like a vacuous statement, but in fact, it's at the heart of Newton's understanding of gravity - masses attract each other.

The whole point of this exercise (and you could do this again with thermodynamics - how do you get from heat to the idea of entropy?) is to show that sophisticated, powerful, quantitative scientific theories are developed to describe phenomena that at first might seem like no puzzle at all, or otherwise impossible to talk about in well-defined or quantitative terms. And phenomena that might seem hopelessly difficult to address in a non-vague way ('complexity science' comes to mind here) could some day be understood with a clear, elegant, predictive theory.