Becky Jungbauer
Galileo merged the fields of cosmology and astronomy, thanks to his telescope, which gave scientists a more accurate way to observe and define the heavens. His telescope helped shift authority in the observation of nature from men to instruments. From backyard astronomers to the Hubble Telescope to the Vatican Observatory, Galileo’s impact on astronomy is both formative and lasting.

In the first article of this trio, you saw some of the objects and instruments from the Galileo exhibit, along with setting the scene of his life. The second article continued in that vein. This last article will cover Galileo's contributions to astronomy, physics, optics and more in the 16th and 17th century.

Theory of the Concave Spherical Mirror 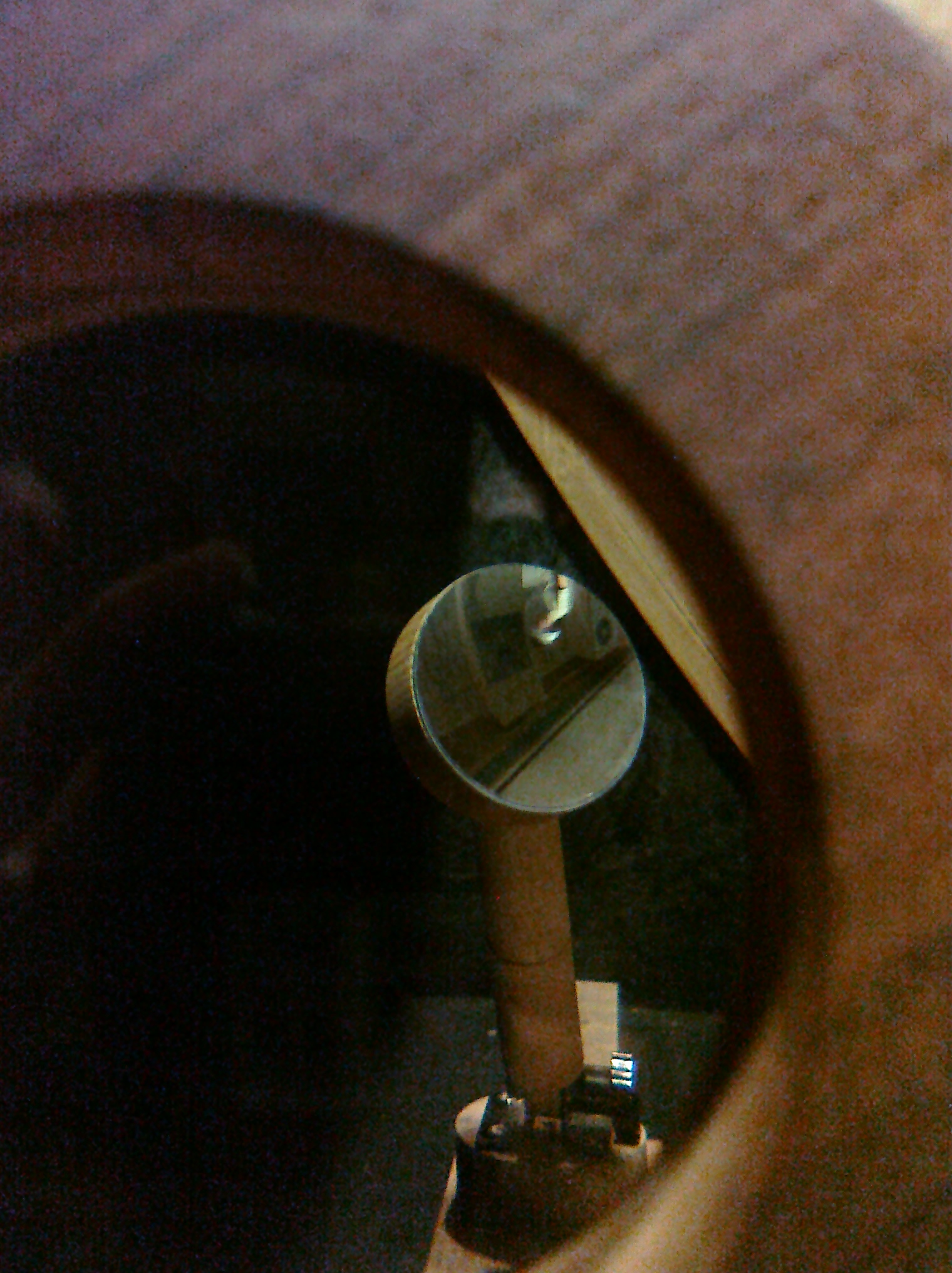 Looking at some guy through a mirror (note the image is inverted). 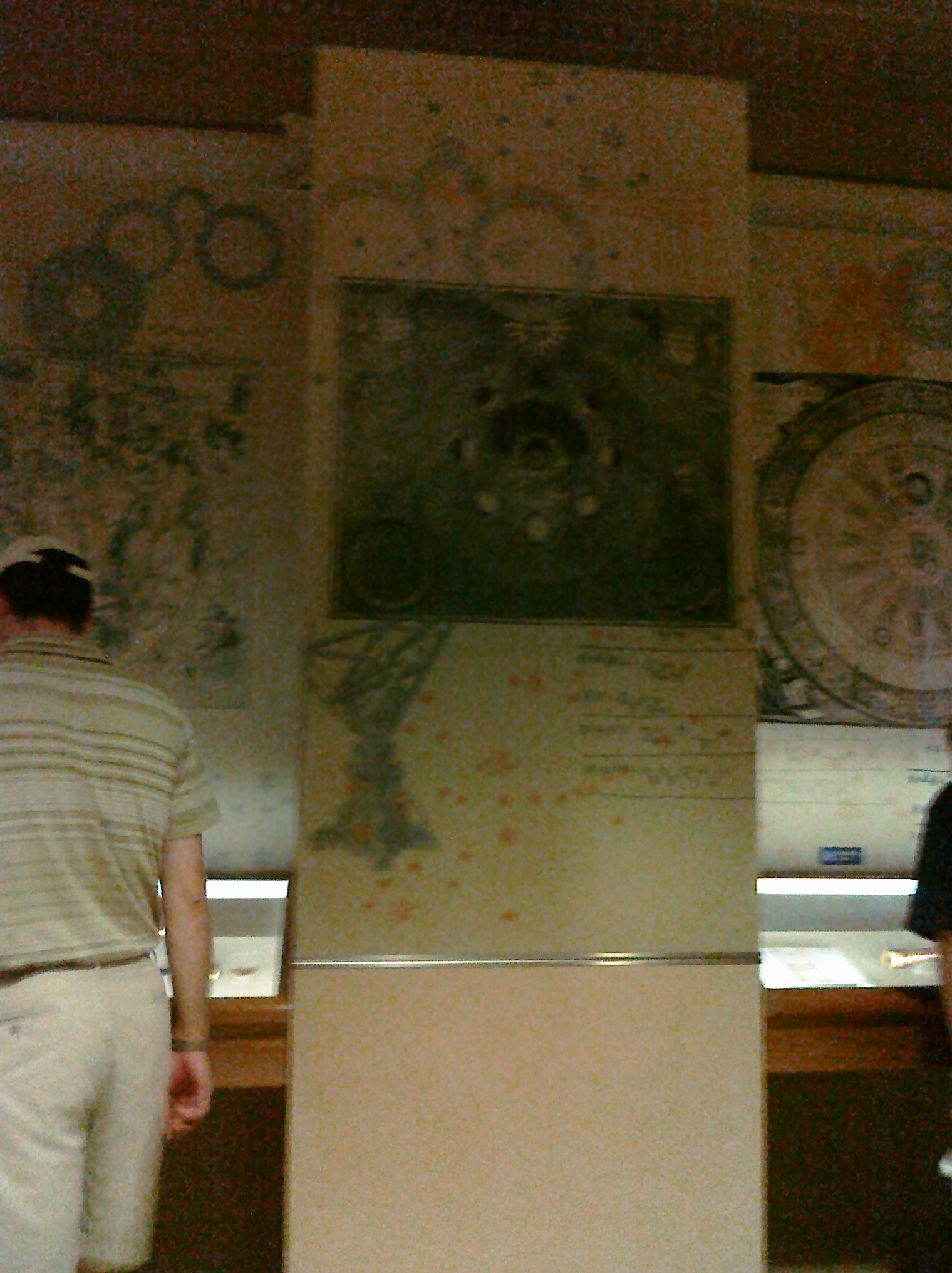 Looking at the guy in real life. 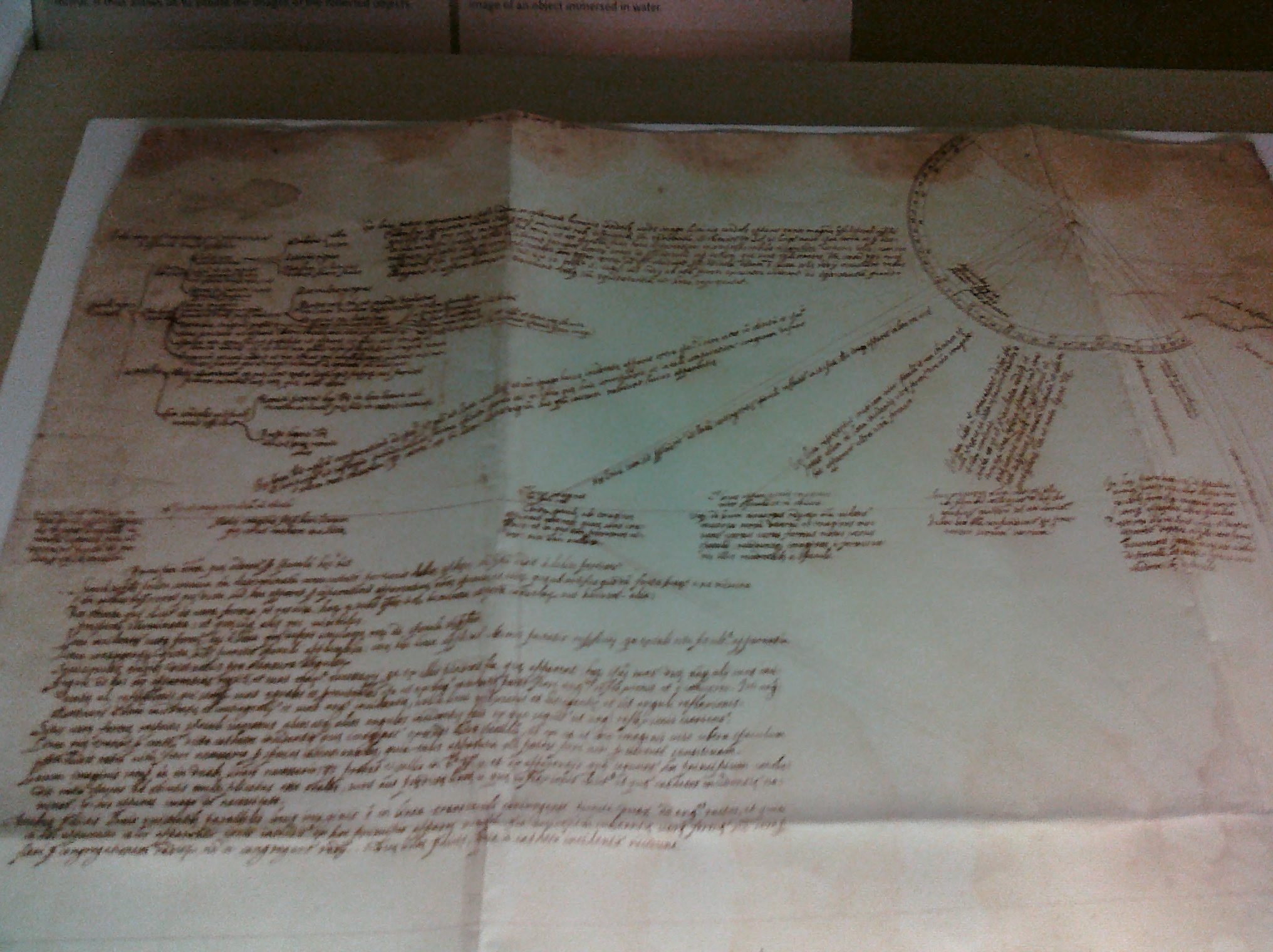 A manuscript copy of the diagram that combines “in an innovative manner” burning properties and those relevant to the formation of images in a concave (bulging inward, or converging) spherical mirror, thus allowing us to situate images of reflected objects.

If you'd like to explore concave reflection more, check out this fun page. Or, for an interactive tutorial, go here. This one explores how moving the object farther away from the center of the curvature affects the size of the real image formed by the mirror. Also examined in the tutorial are the effects of moving the object closer to the mirror.

One telescope for every child

Lenses were introduced to the West in the 13thcentury, and by about 1450 the ingredients for making a telescope were there, but the first patent for a telescope wasn’t awarded until 1608 in the Netherlands.1 Galileo took the power of the telescope from a mere 3 or 4x to 15-20x by the end of 1609. He was able to make his famous lunar observations and discoveries of Jupiter’s moons thanks to the increased power of his telescope. 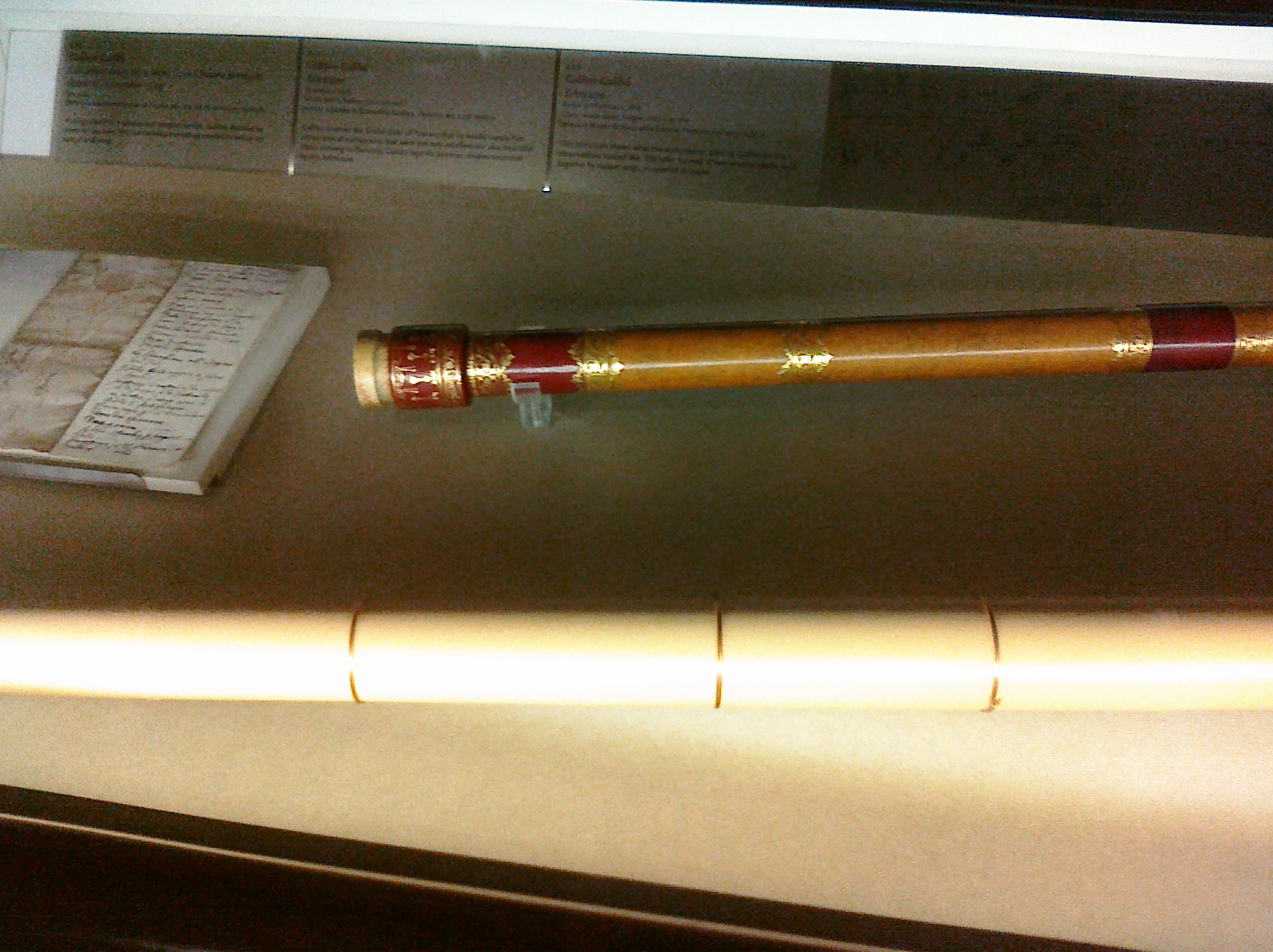 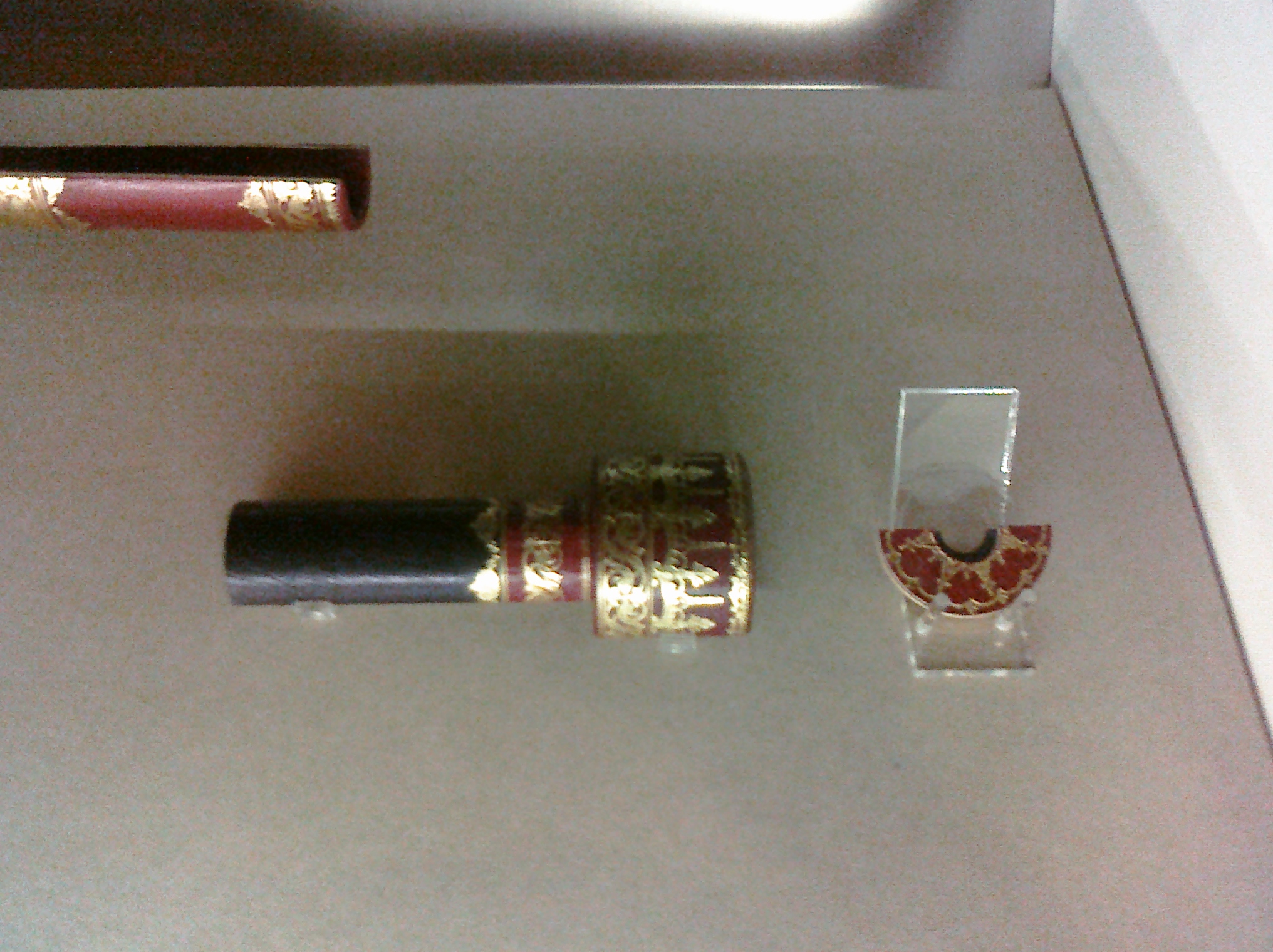 Galileo telescope, c. 1610 – glass, leather, wood. Made for the Grand Duke of Tuscany (Medici) to fulfill the promise of both excellent and beautiful astronomical instruments. 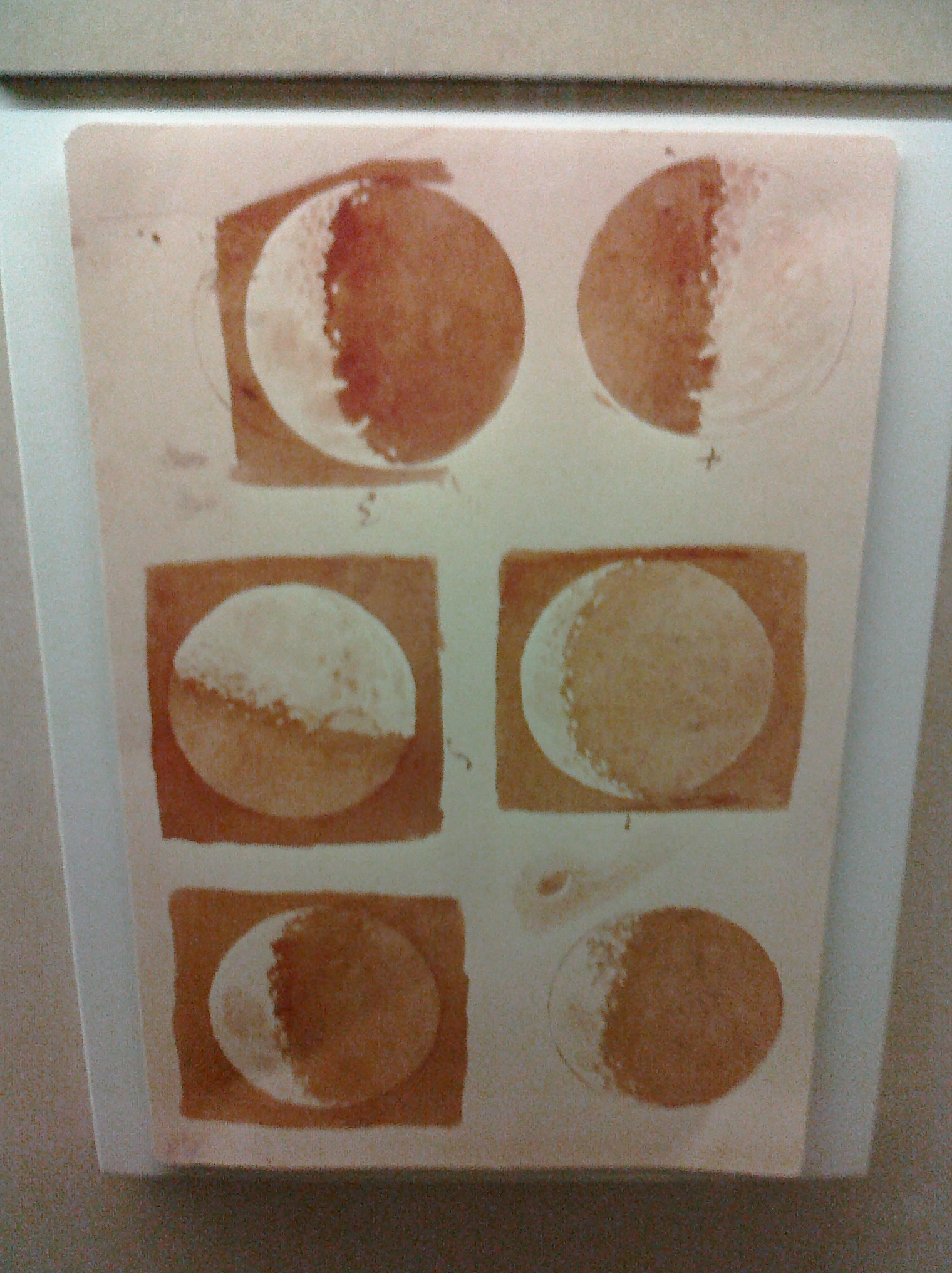 Watercolor, Galileo's observations of the moon. 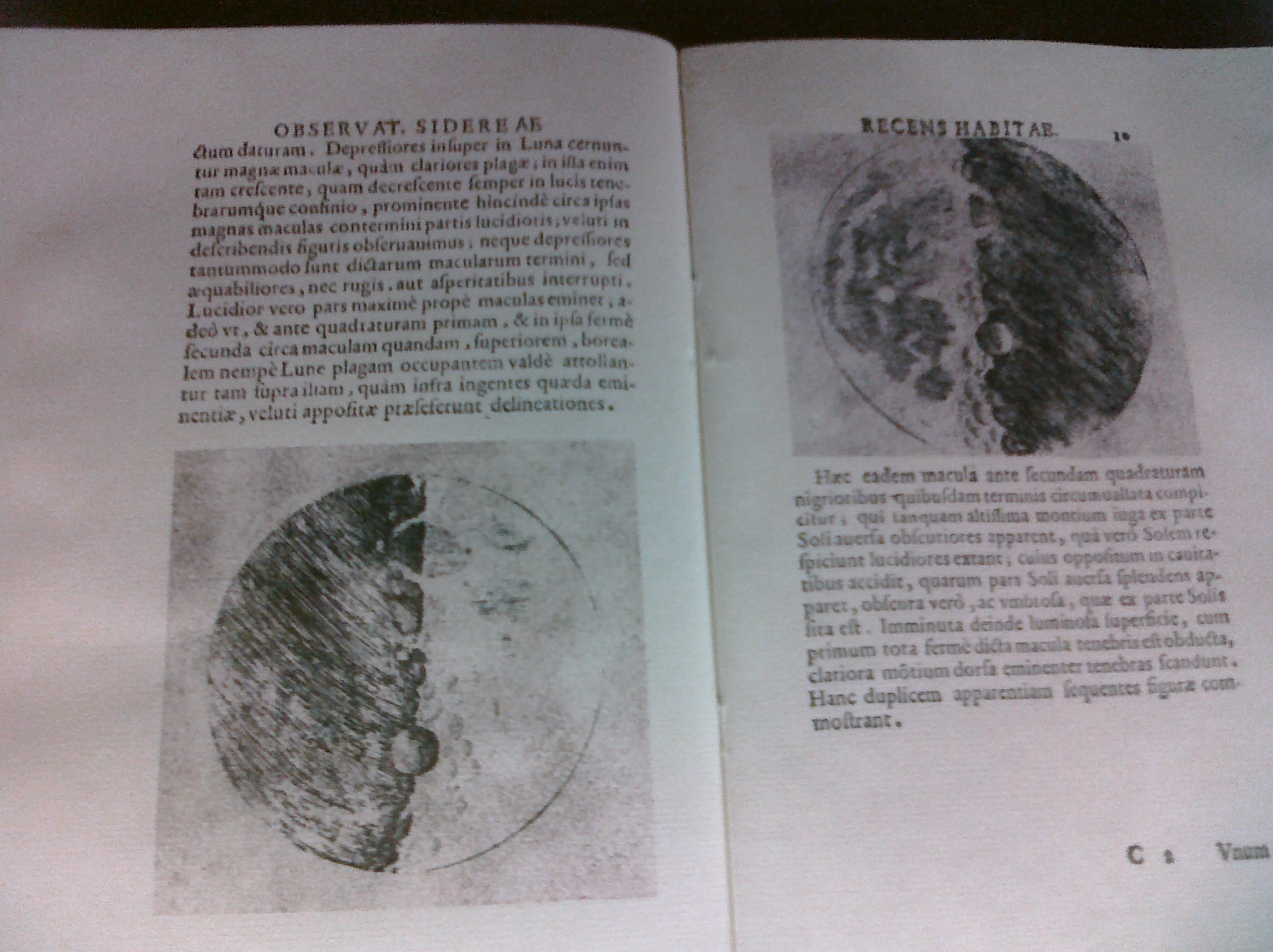 Engraving of his observations of the moon.

Galileo's drawing of the evolution of sunspots. 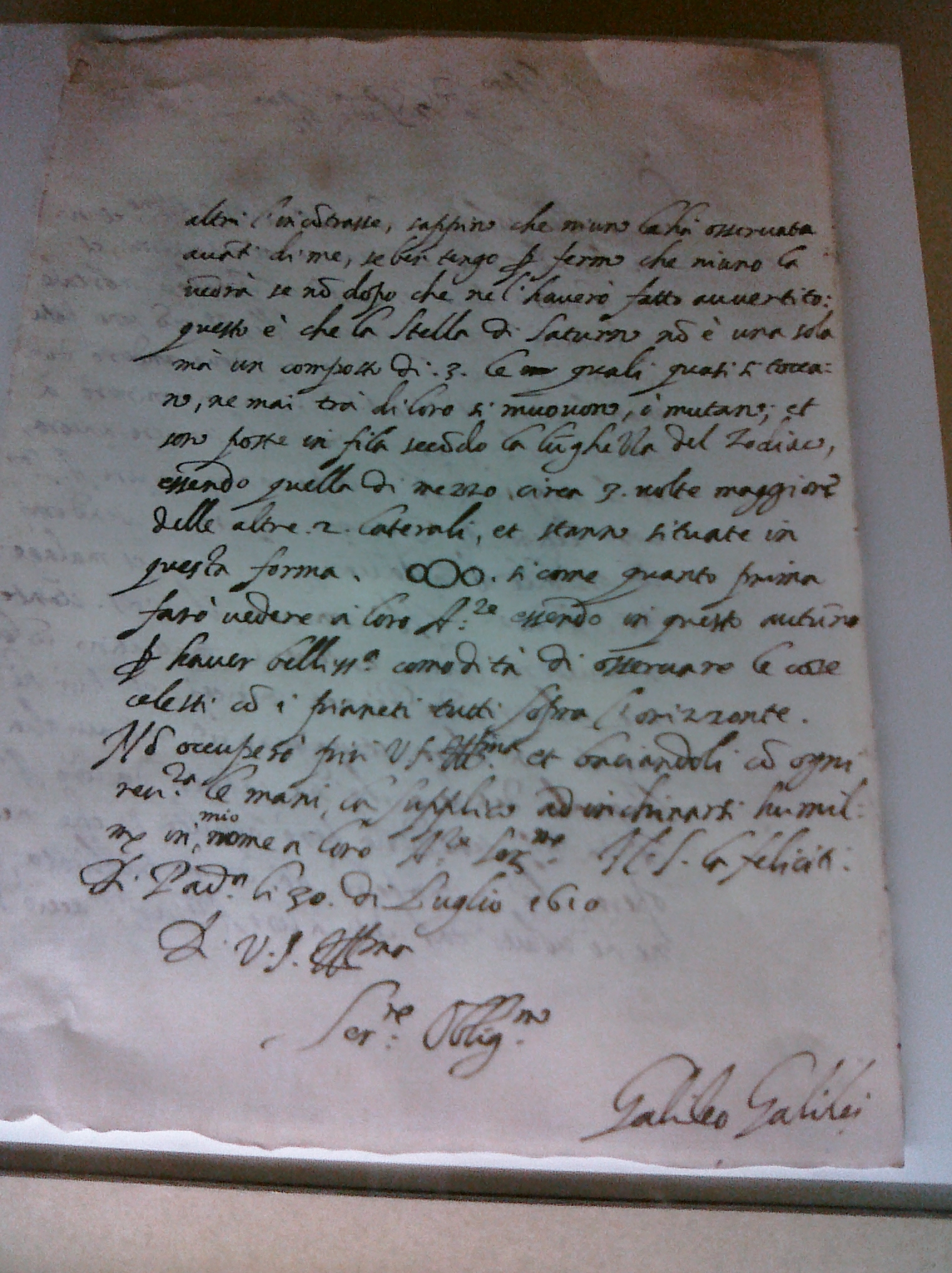 Letter to the Secretary of State in Tuscany describing his observations of Saturn. 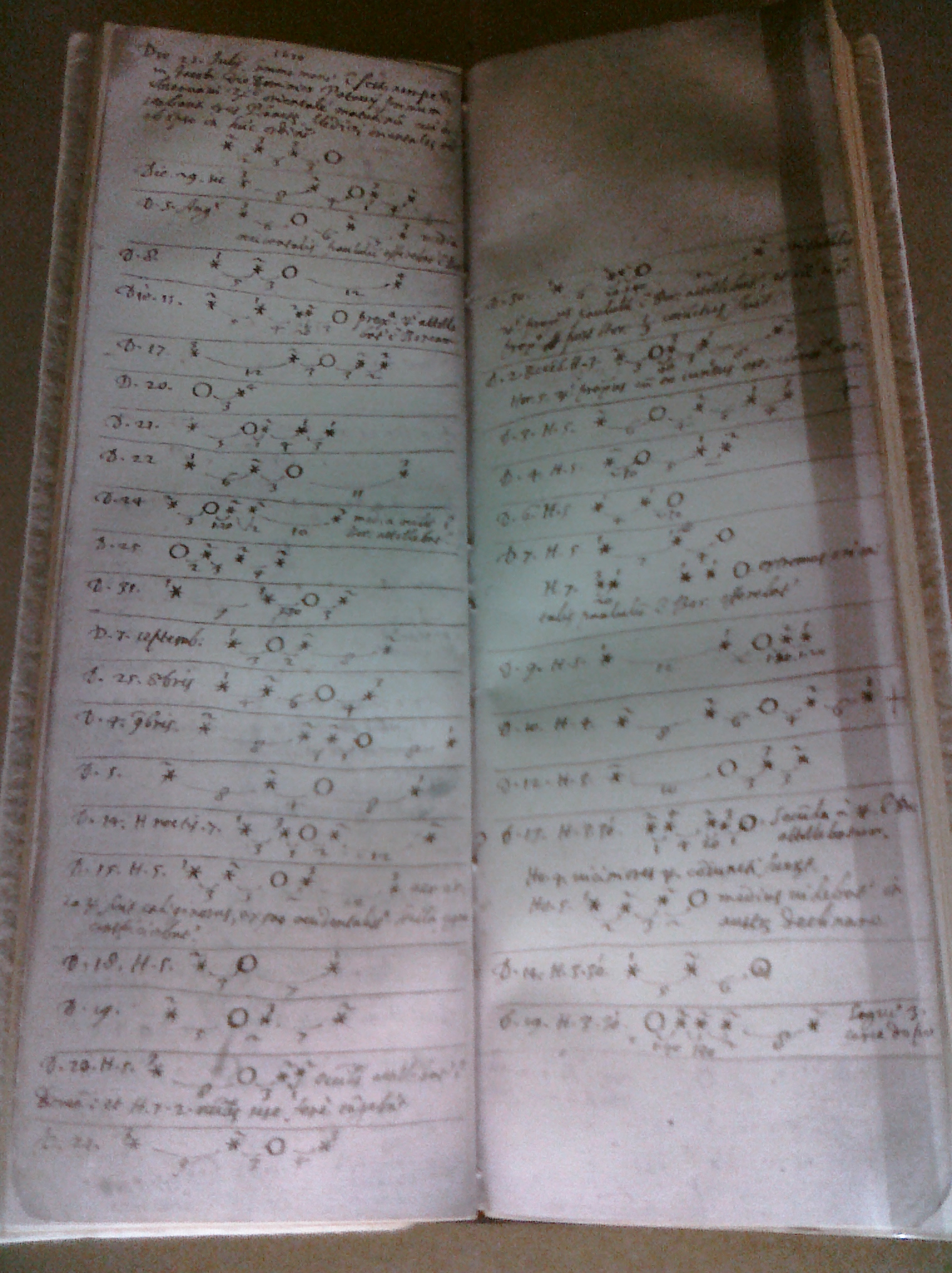 Diary of observations of Jupiter’s satellites, used to determine orbital periods and radii.

Telescopes are so important, the people at the International Year of Astronomy say, that there should be a one telescope for every child project akin to that of the one laptop per child. Check out more here and here (with bonus photos and discussion for fans of Battlestar, Dr. Horrible, Ghost Hunter and the Guild). 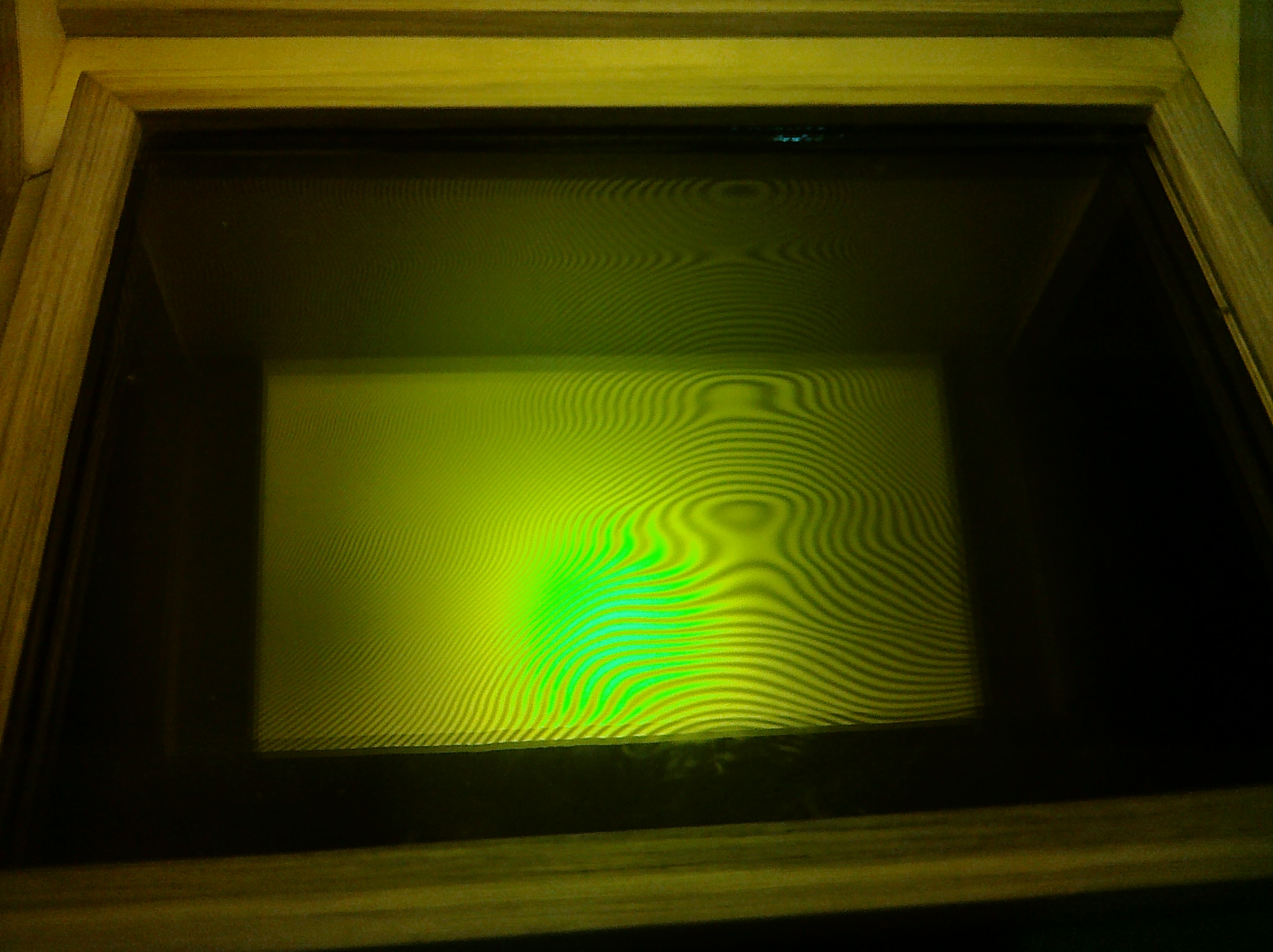 Just for fun - two plates under light of a sodium lamp showing light and dark “fringes” caused by the interference of the light waves. Each fringe represents a “step” 0.0003 mm high.

Galileo’s influence isn’t only in the centuries after his death; he also had an immediate impact on his contemporaries, who in turn influenced each other. In particular, Johannes Kepler took Galileo’s telescope one step further in 1610. Kepler's telescope "uses a convex lens as the
eyepiece instead of Galileo's concave one. The advantage of this arrangement is the rays of light emerging from the eyepiece are converging. This allows for a much wider field of view and greater eye relief but the image for the viewer is inverted."2 He also published his own observations of Jupiter’s moons, which a boost to Galileo’s work. His other published works included his theory that the Christian calendar was in error by five years, and that Jesus had been born in 4 BC.

Whilst Galileo did not propose his own model of the universe, his observational, experimental and theoretical work provided the conclusive evidence need to overthrow the Aristotelian-Ptolemaic system. His work on forces was to help Newton develop his theories as well. Galileo died in 1642, the year that Newton was born.3 Newton inherited the mantle as the most pivotal figure in the scientific revolution, laying the foundations of modern optics and physics and certain aspects of mathematics. He may be most remembered for his three laws of motion, which he applied not just to motion on Earth but equally to the motions of other bodies such as planets in space. He applied his mathematical techniques to investigate the nature of the force between the Earth and the Moon, and the Earth and the Sun. His solution revealed the force to obey an inverse-square relationship and result in elliptical orbits as calculated by Kepler.

Galileo realized that heavenly objects are physical - the moon has a rocky surface, for example. This led to the realization that the motions of the moon and planets obeyed the same physical laws as ordinary things moving on earth. Newton used this to develop his laws and the first unified picture of the universe.4

Now Einstein gets involved - he realizes that while this picture of the universe was a pretty good one, it wasn't complete - space and time are related to each other in a simple but unexpected way. This then led to his breakthrough that mass and energy are different aspects of the same thing. 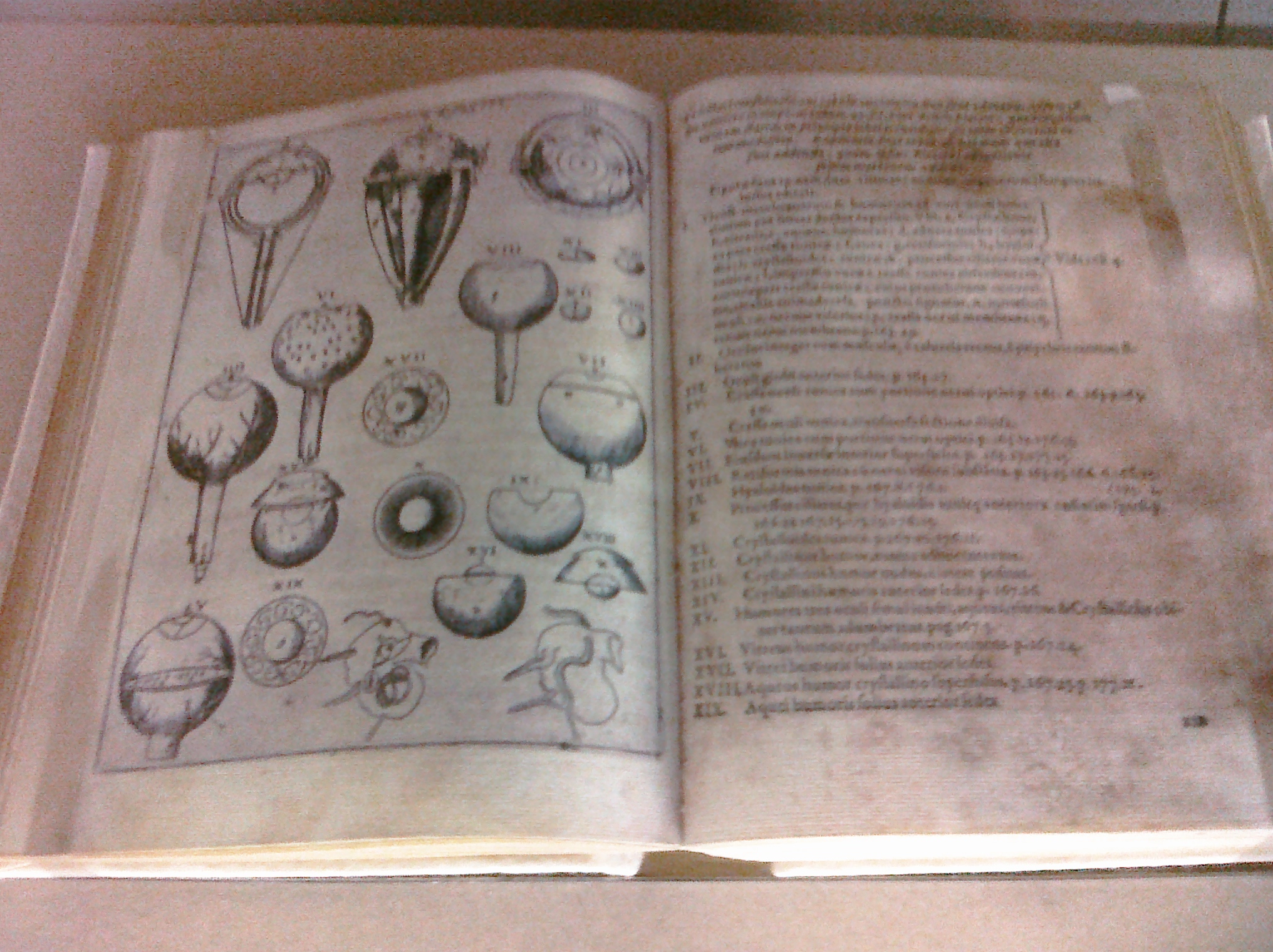 Kepler - from a work on determining the magnitude of eclipses. 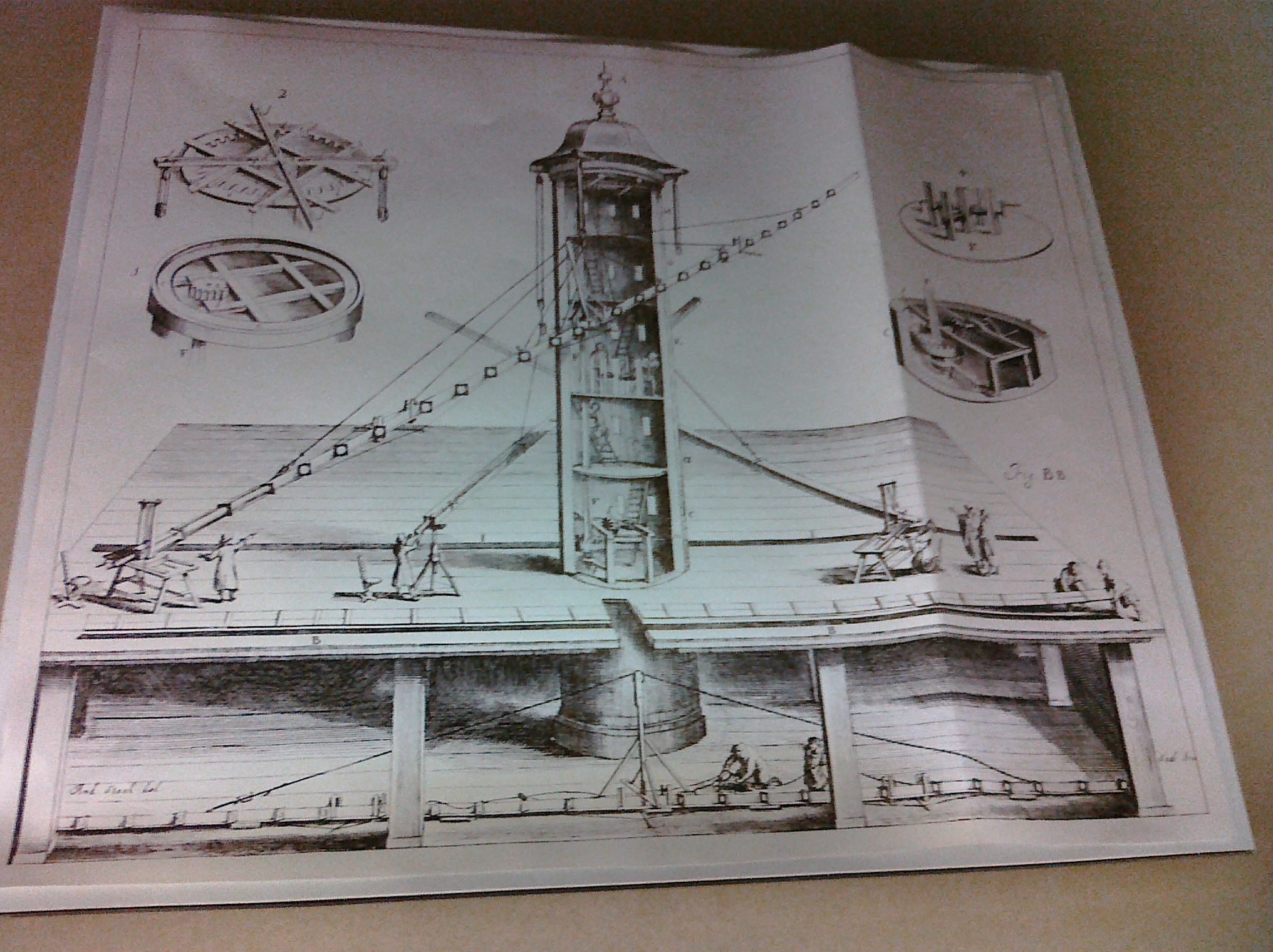 Johann Hoewel; text describing all of the astronomical instruments Hoewel built, including designs for a big revolving tower to house long telescopes.

The evolution of the telescope - Galileo to Kepler to Newton

Part of the exhibit included three boxes with light rays, lenses and mirrors to demonstrate how the ray of light changed as it passed through a telescope. 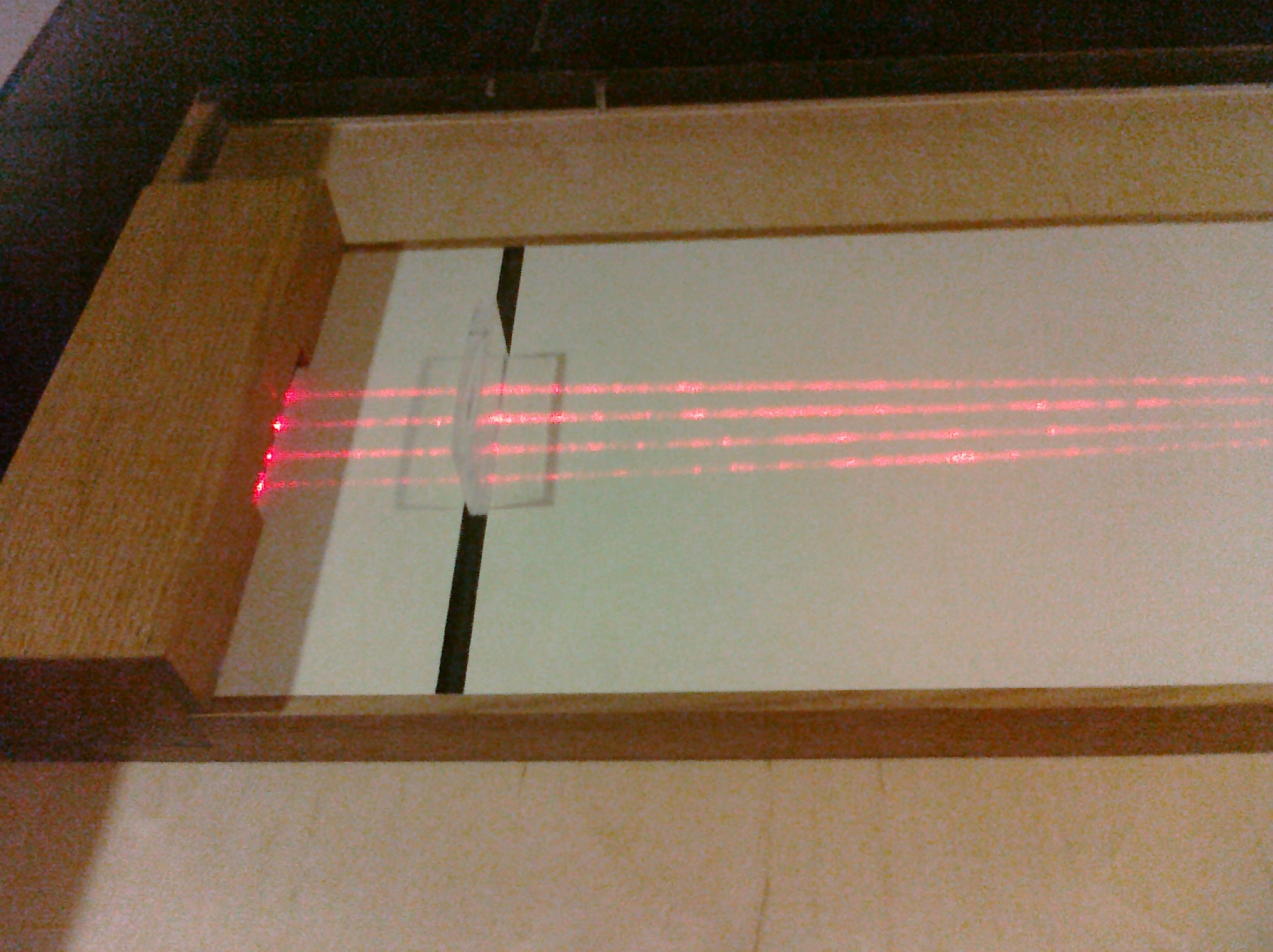 Galileo. Parallel rays of light converge toward the focal point in front of the objective lens (plano-convex) and then become parallel again after the ocular lens (plano-concave). Rays do not cross, so image appears erect. 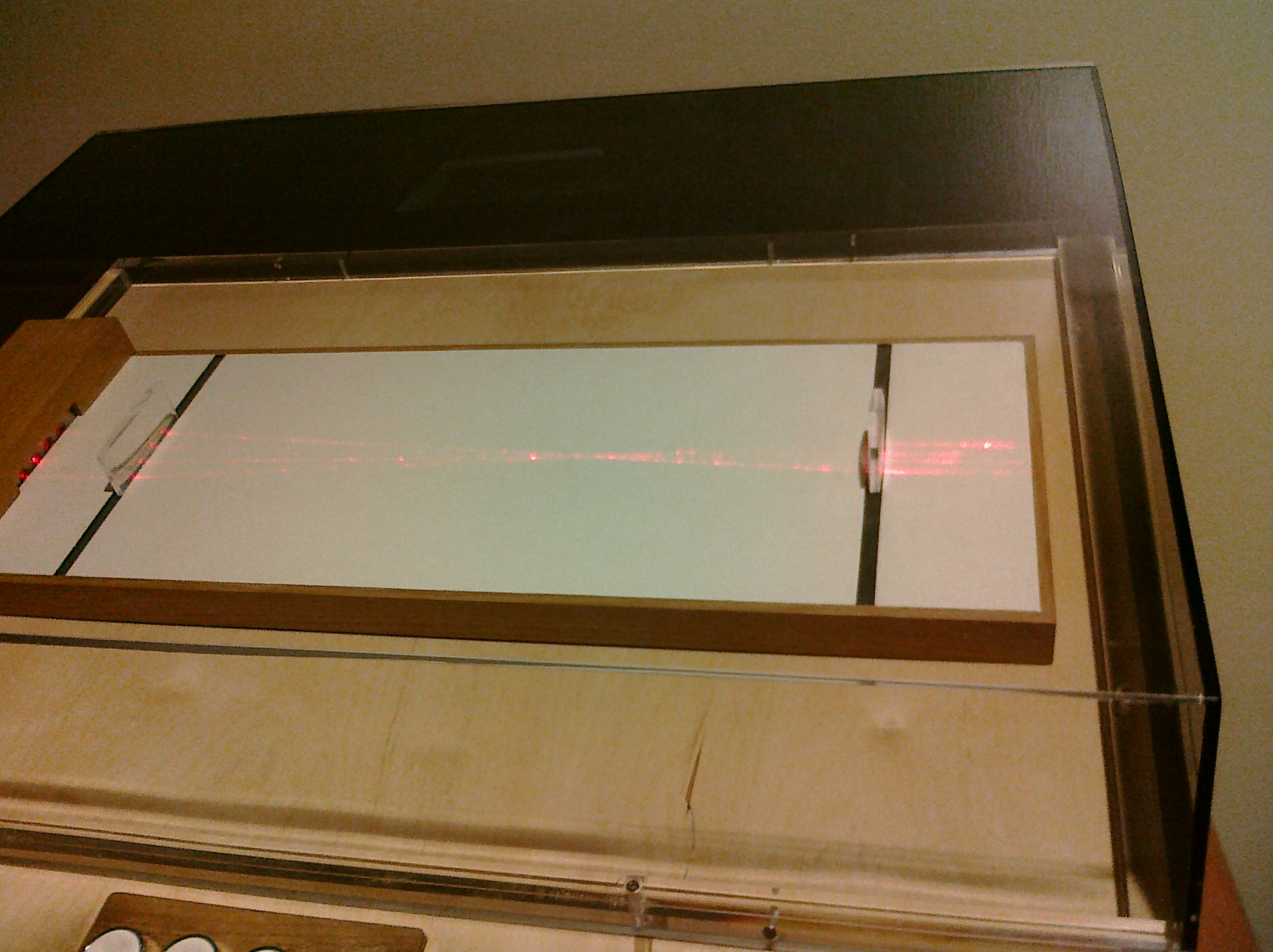 Kepler. Both lenses are bi-convex, so the parallel rays converge beyond the objective lens at the focal point, cross, are intercepted by the ocular lens, and become parallel again – but the image is inverted. 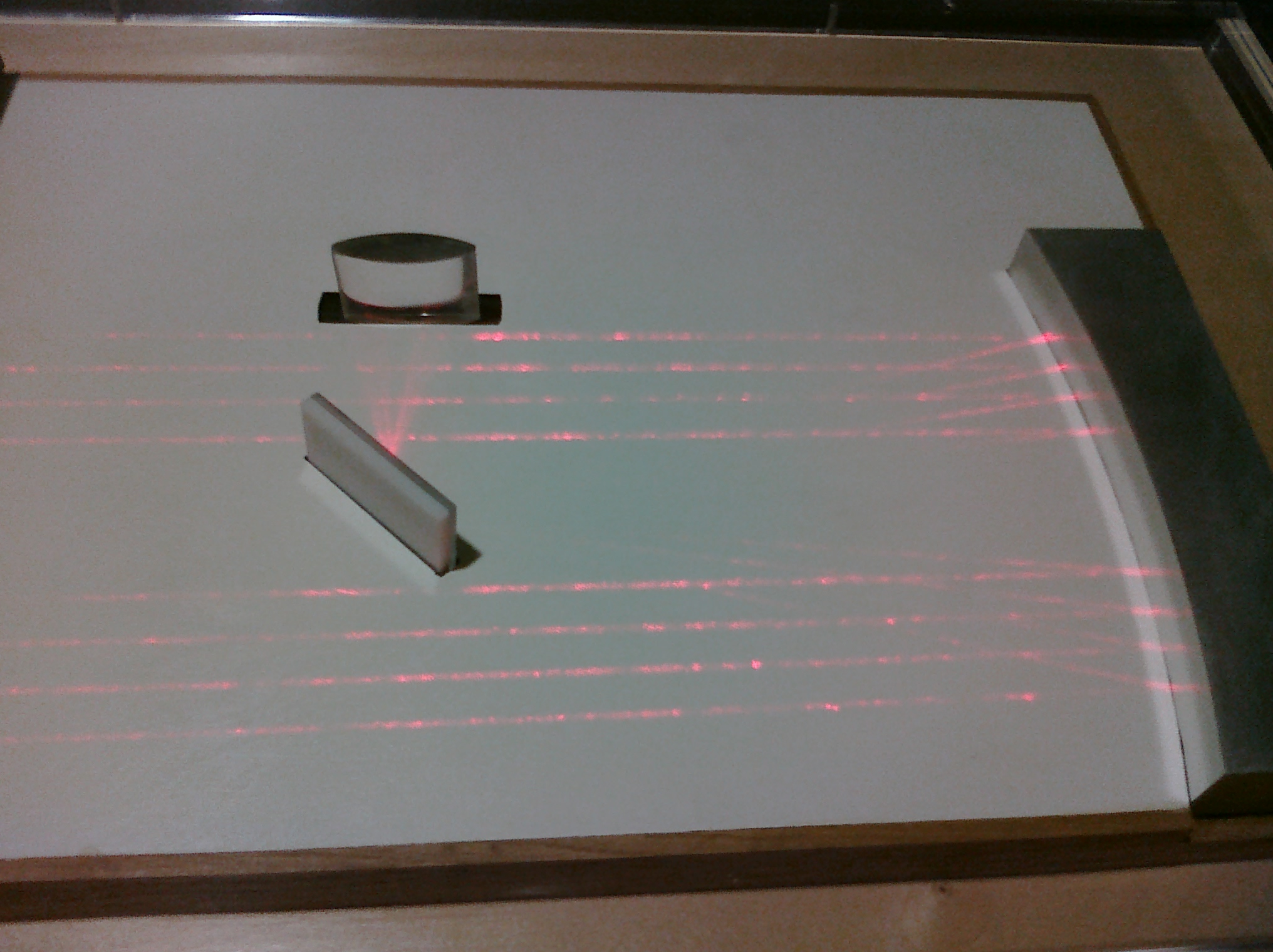 Newton. The objective mirror is concave, the secondary mirror is inclined 45 degrees and is plane. Light rays converge toward the focal point of the objective, are deviated laterally by the inclined mirror, and become parallel again by the bi-convex eyepiece. Since rays cross, the image is inverted.

Galileo’s discoveries led him to believe that the heliocentric view of the solar system was in fact correct. The church rejected that, saying the earth was the center of the universe and a Copernican system was contrary to scripture.

In 1624, eight years after he had been privately admonished by the church to give up Copernican theory, Galileo asked Pope Urban VIII (who didn’t know about the admonition) for permission to publish his views, but was told he was only allowed to present it as a hypothesis – he couldn’t defend the theory.

In 1632 Galileo published Dialogue Concerning the Two Chief World Systems, a fictional conversation among three characters that essentially argued for the heliocentric view. The church hauled him to Rome to stand trial for “suspicion of heresy” in 1633. The Dialogue was banned, Galileo was placed under house arrest (he was 69 at this point, so it was basically for life), and he had to recant his heretical views. 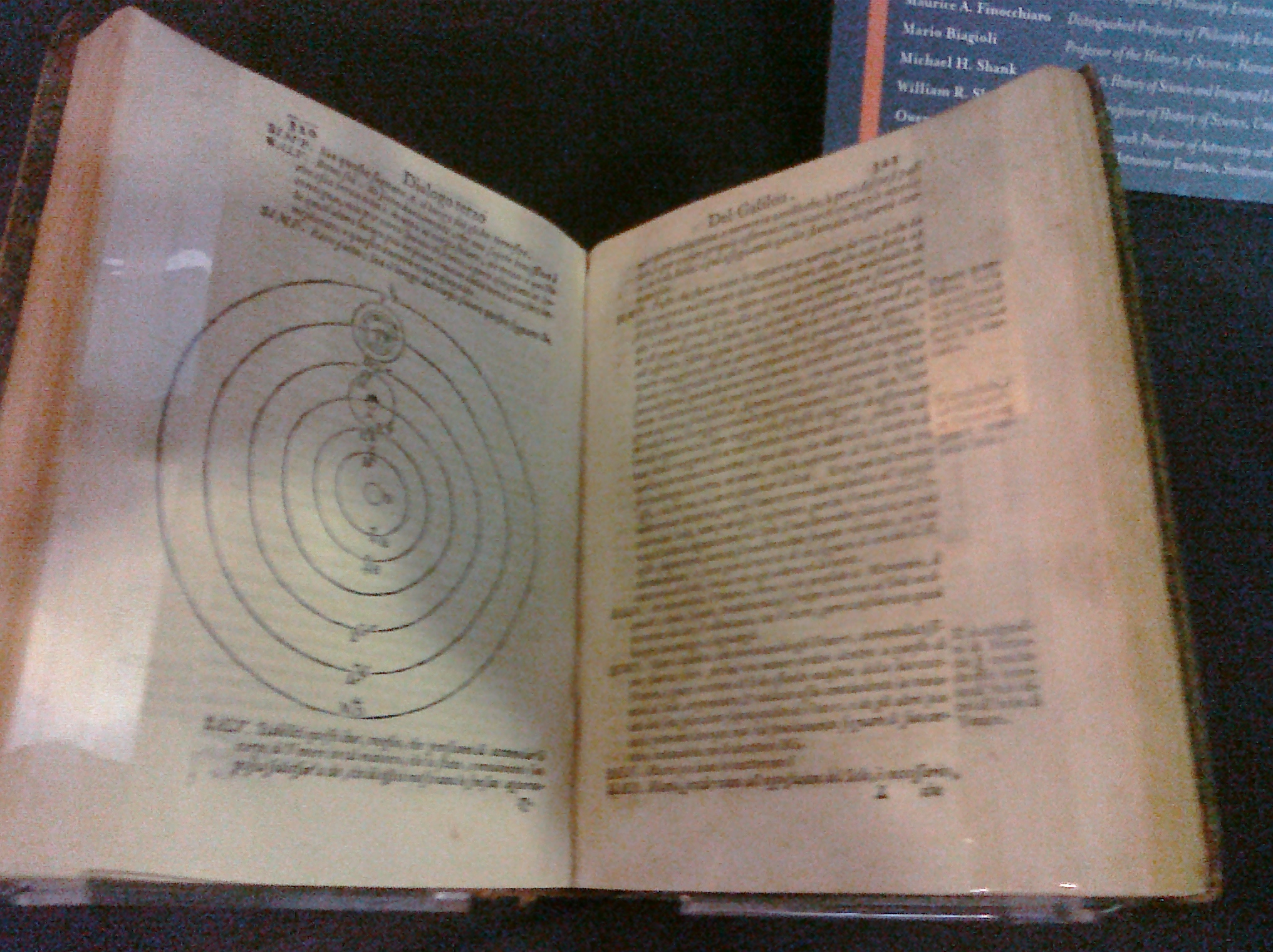 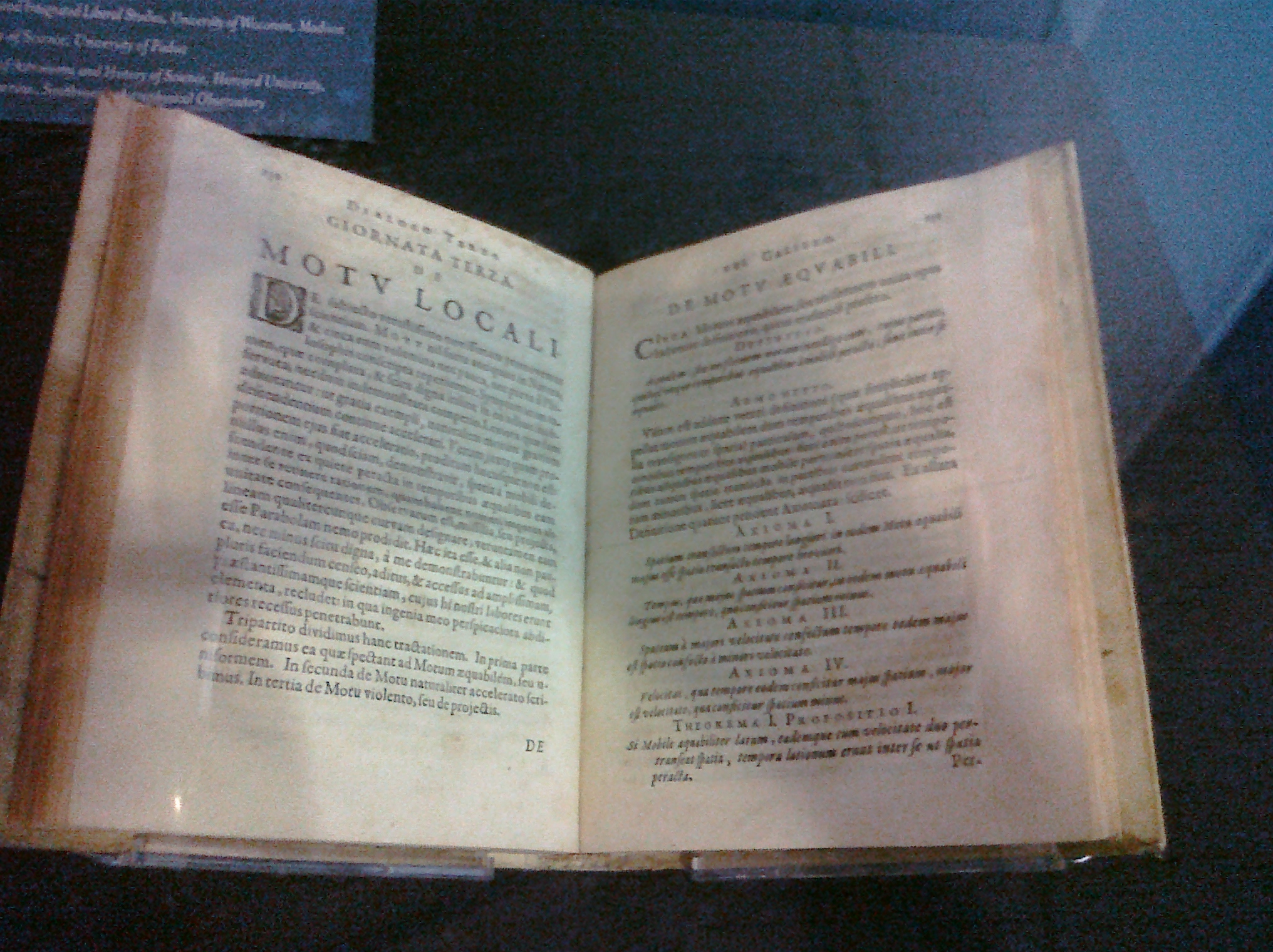 Discourses on Two New Sciences, the follow-up to Dialogue, which presents Galileo’s work on laws of motion for falling bodies and thoughts on time space and motion