Becky Jungbauer
Galileo's contributions to science in general, and optics and astronomy in particular, were so monumental that over 350 years later we still discuss them in introductory physics courses.

A recent exhibit at the Franklin Institute in Philadelphia "showcased Galileo's accomplishments, his relationship to the ruling Medici family, his discoveries, and his overall impact on astronomy, physics, and math." Some of the objects and instruments from the exhibit, along with setting the scene of Galileo's life, were presented in the first article of this series. This, the second article, will continue in that vein. The third will cover Galileo's contributions to optics in the 16th and 17th century.

"Measure what is measurable, and make measurable what is not so." - Galileo

Let's start with some "mathematical fun." No, that isn't a typo or a paradox. Cosimo de' Medici owned the book pictured below, which was designed for him to have "fun" with his education. It describes the operations of the first instrument for multifunctional calculation of Modern Age. You can see the illustration, which depicts its use for measuring the height of a mountain. 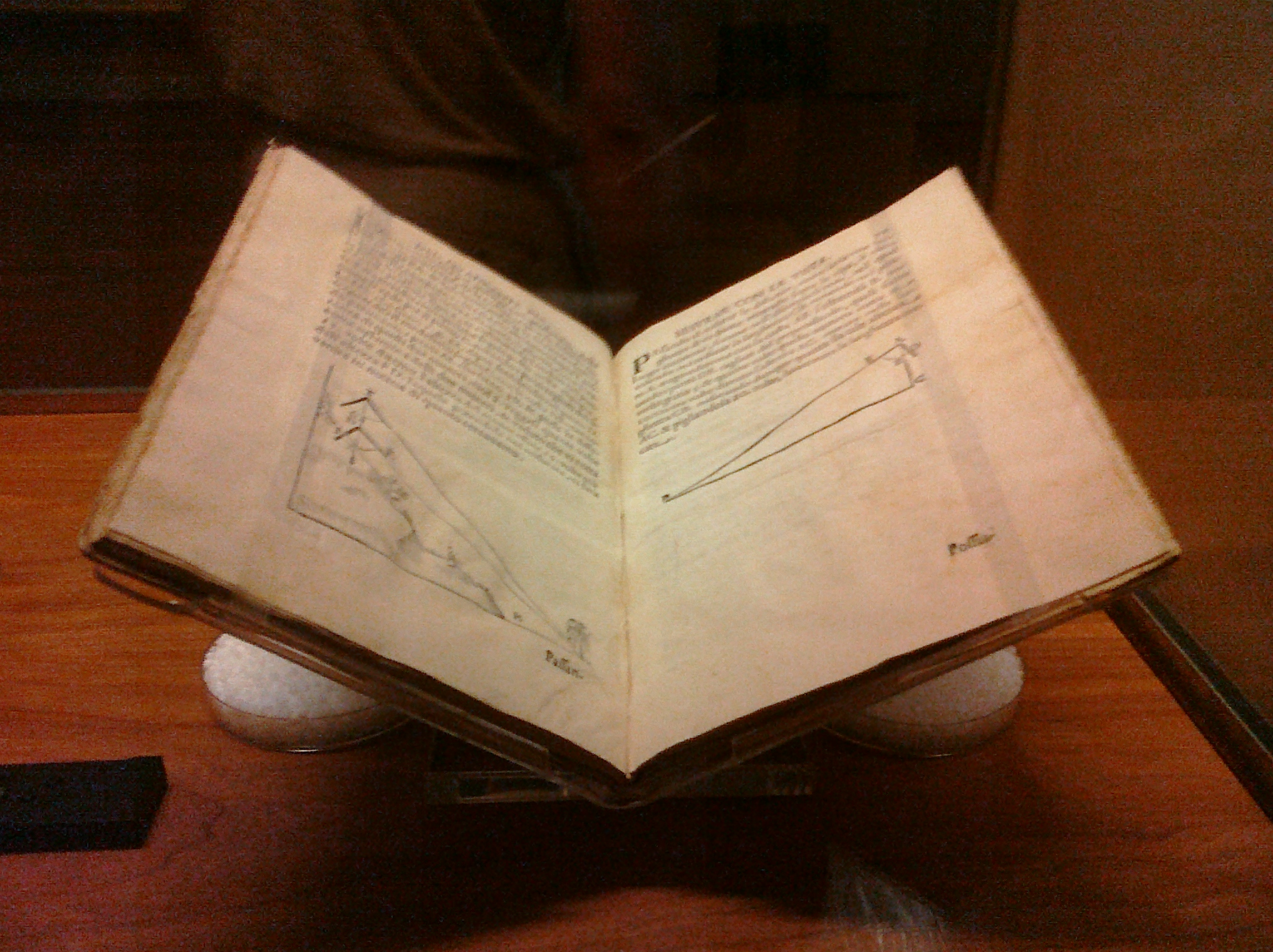 I'll wait for you to stop having so much fun. I know, you'd rather continue with multifunctional calculation. It's hard to break away.

One of Galileo's most famous discoveries was that of four of Jupiter's moons. He conceived of an instrument, called a jovilabe, that would allow him to determine the apparent position of each of the satellites of Jupiter in relation to the sun and Earth. Below is one of the five drawings Galileo made to illustrate the jovilabe. 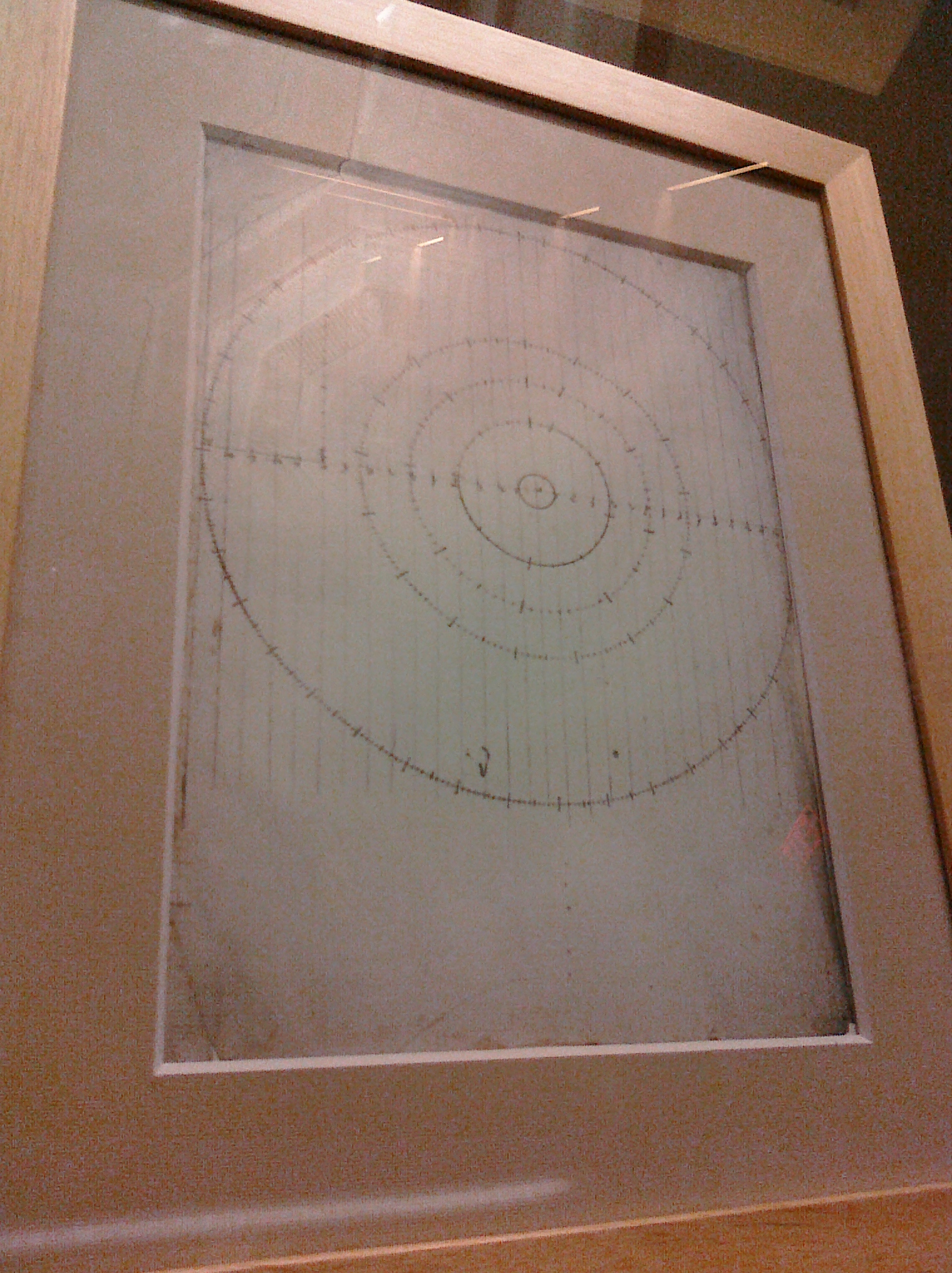 Galileo was quite the prolific author in his day. He took some unpopular stances (unpopular with the Church, that is), like defending Copernican theory. This photo below shows Galileo's "Dialogue Concerning the Two Chief World Systems," written in 1632. 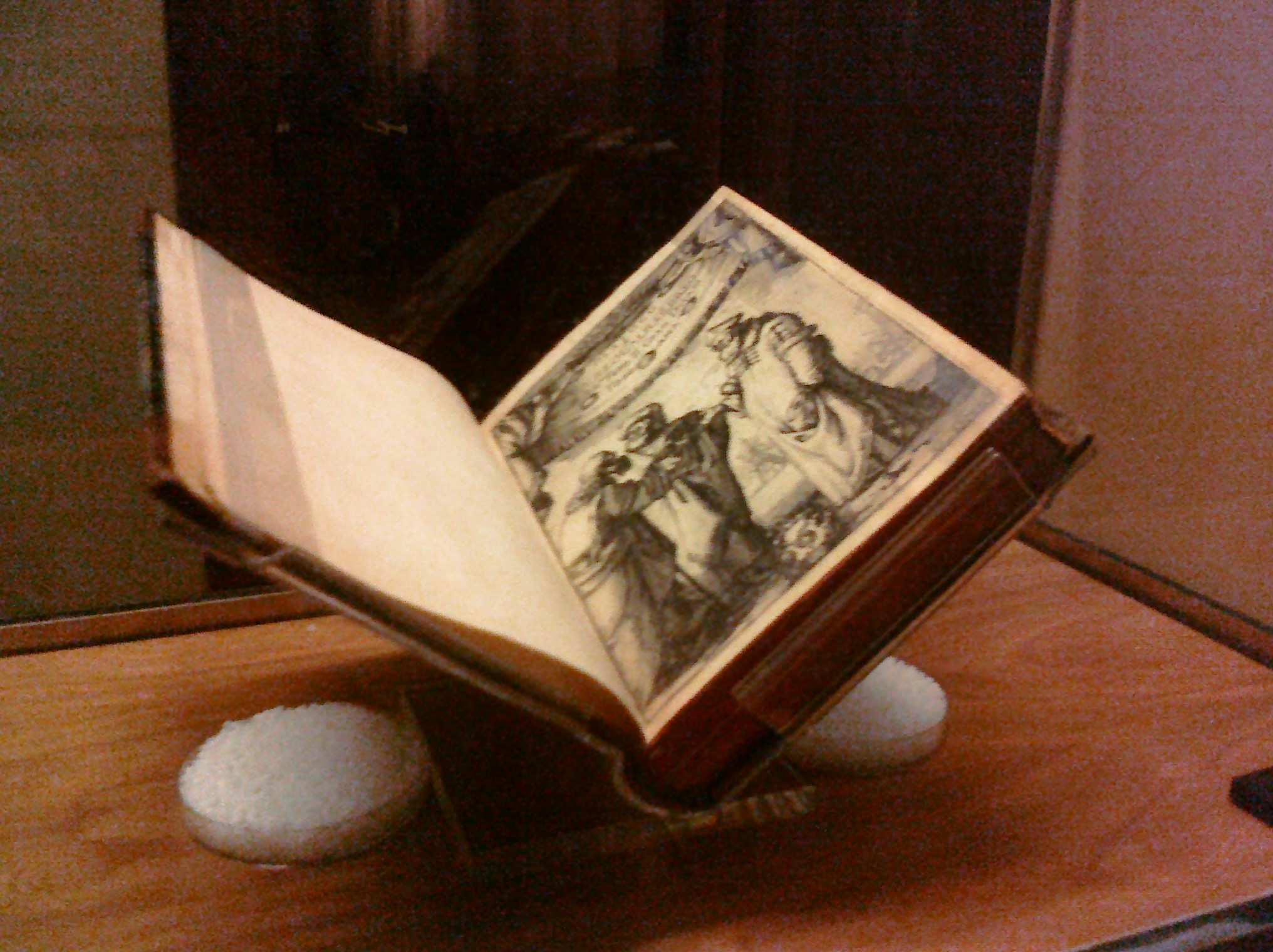 The book compares the Copernican (sun-centered universe) system with the Ptolemaic (Earth-centered universe) system through a discussion among among two philosophers (Salviati and Simplicio) and a layman (Sagredo). A year after the book was published, Galileo was convicted of suspicion of heresy thanks to the content of the book, which was placed on the Index of Forbidden Books.

Galileo had a lot to say on the issue of science versus religion. He was a Catholic, and, as a product of his time, his daily life was likely steeped in the Church's rules. Although he was eventually forced to recant his belief in heliocentrism, he could not reconcile science with what the Church taught.

"I do not feel obliged to believe that the same God who has endowed us with sense, reason, and intellect has intended us to forgo their use."

"The Sun, with all the planets revolving around it, and depending on it, can still ripen a bunch of grapes as though it had nothing else in the Universe to do."

"In questions of science, the authority of a thousand is not worth the humble reasoning of a single individual."

"It is surely harmful to souls to make it a heresy to believe what is proved."

"The Bible shows the way to go to heaven, not the way the heavens go."

"It vexes me when they would constrain science by the authority of the Scriptures, and yet do not consider themselves bound to answer reason and experiment."

Galileo also worked on celestial bodies closer to home. He found that our moon has a pockmarked surface. Below is a watercolor Galileo did showing the phases of the moon, as well as the many "cavities" present on the surface. 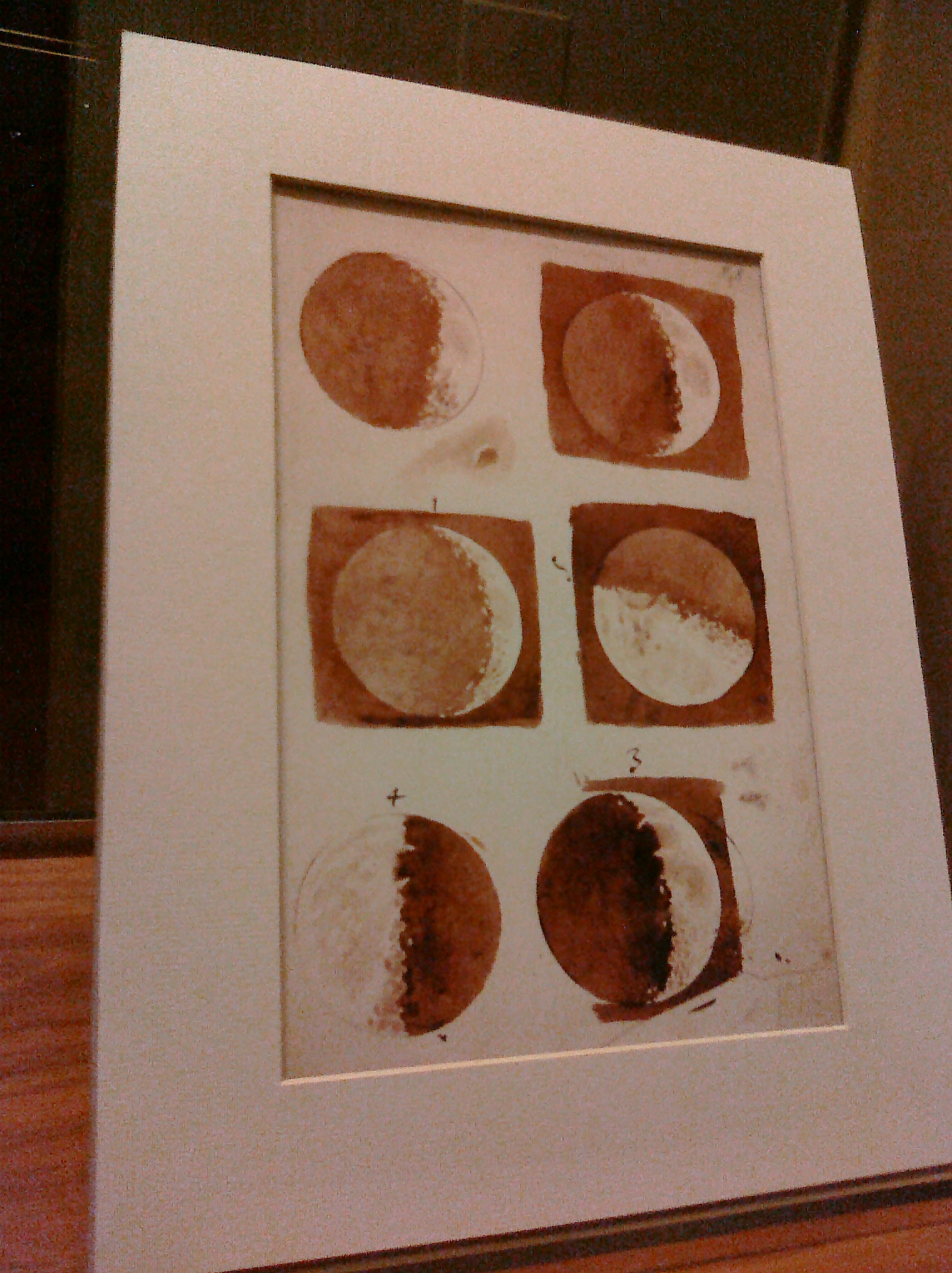 The thermometers back in Galileo's time were a lot fancier than the digital ones we have today. I would not have been allowed to touch them, as I am clumsy and would have likely broken every thermometer within a five mile radius.

The two spiral thermometers in the forefront are reminiscent of Galileo's contribution to thermometers - he built one of the earliest devices to measure how air density changes temperature. It's hard to see in this picture but there are many little "dots" within the spiral arms - 420, to be exact. The black ones stood for single degrees, the white ones equaled 10 degrees, and the blue ones 100 degrees. In the back you can sort of make out a long wiry looking object - that's a tall-stem thermometer, and the dots in that stem stood for the same degree units as the spiral one. 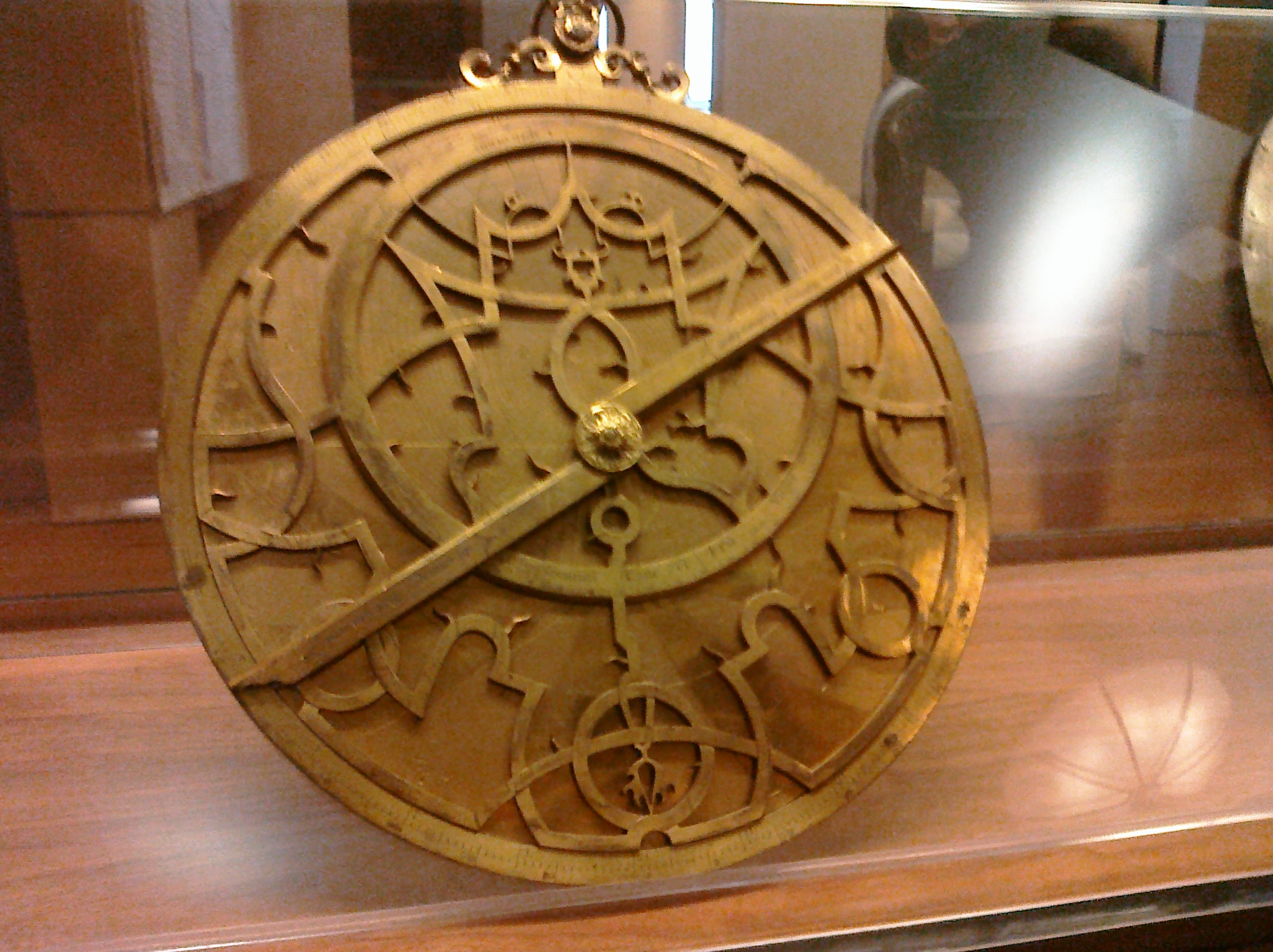 Had Flavor Flav been a 16th century Italian, he would have worn one of these around his neck. The picture doesn't quite show how large this was - probably a good two or three feet high. There were others that were larger but I liked this one the best because (a) I immediately thought of Flav, and (b) it was attributed to Gerhard Mercator (1512-1594), so it ties to Scientific Blogging's Gerhard. Yes, I know it's a stretch. Anyway, this astrolabe happens to correspond to the latitudes between North Africa and Sweden.

Hopefully these photos have given you a taste of the Galileo exhibit. The next article will deal with the second part of the exhibit, which was Galileo's contribution to optics, and how he merged cosmology and astronomy by developing his newer, more powerful telescope.
A Truth Universally Acknowledged
More Articles All Articles
About