Get Potassium Iodide Or How Respond To The Present Irrationality?
By Sascha Vongehr | March 18th 2011 02:17 AM | Print | E-mail

In Nanjing, that is close to Shanghai, and I suppose also in other places around here*, you cannot buy salt anymore. Every last grain has been bought up. Why? Apparently, some evil guy started the rumor that table salt, which is sodium chloride (NaCl), can protect you from radioactivity. We are not talking about iodide salt here, nor even sea salt either, which has some iodide in it, but simple salt, which there is already way too much in the Chinese diet.

*(Update: In the whole of China, the first person died already from eating too much salt!)

So I check my blog comments this morning, and guess who the culprit is? IT IS ME! According to the comments to my last article, I am the one to blame! How so?

Science bloggers went along with political officials and others close to the nuclear power industry in downplaying the crisis at the nuclear power plants in Fukushima, Japan, telling us that all is fine, no radiation will be released, and now, instead of admitting their errors, everybody who points this out is accused of instigating panic.

I have been accused of scaremongering for stressing the well known fact that officials seldom present you with the truth in the heat of the moment, especially not if their own positions are at stake, like those of officials with cozy ties to the nuclear power industry obviously are.

Mark-1 type containment vessels are known to be unsafe since at least 1972. G. E. sold them anyway, because they were so cheap. Get this from the “experts” at G. E., for example Michael Tetuan defending Mark-1 as “the industry's workhorse with a proven track record of safety and reliability for more than 40 years.”

Some of these containment vessels are now broken in Japan and leak radioactive material. Does it sound scientific to you that 40 years prove the safety of something that was advertised as safe for a million years? Like soviet style communism, you know, it held 40 years. To some it is apparently more unscientific to point out that how much, and more importantly what kind of material is leaking is likely not fully reported.

So, G. E. guys are the experts I guess, and my articles here and here are irresponsible scaremongering responsible only for people in Bangkok not going out into the rain for fear of radioactivity.

How good that we have real experts that know how the human body miraculously becomes more resistive to radiation damage in case there is a reactor going critical. Japan's Health Ministry, as all Ministries advised by scientific experts surely way more knowledgeable than me, said Tuesday that it was raising the legal limit on the amount of radiation to which each worker could be exposed, to five times the maximum exposure permitted for US nuclear plant workers.

I must admit that I really am no expert for such intriguing meta-biological mechanisms and maybe I should just do the best to calm the panic. Let me try. Here is a picture of my personal stash of potassium iodide (KI) and iodate (KIO3), as they are now on my office desk: 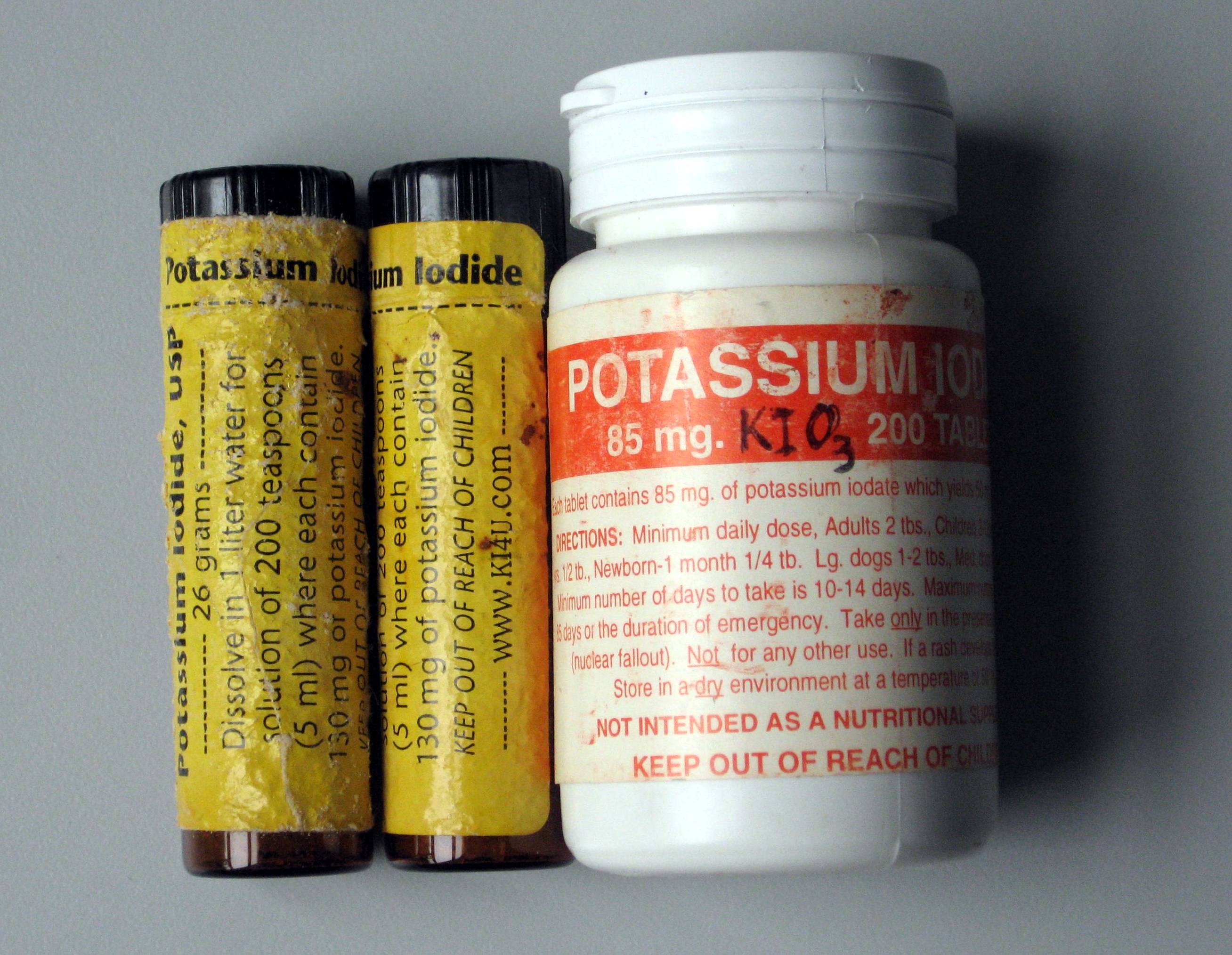 Notice that the bottles are all still sealed. Never opened! I live downwind (blowing southwest this week) from Tokyo, certainly much closer than Bangkok, and the bottles are still not open! OK, so calm down everybody, no need to kill your pharmacist to get to the pills.

Please notice something else also: As you may appreciate from the dirty labels, the bottles are around me for more than 20 years now. So are a sleeping bag, antibiotics, first aid kit, and more. Yep, I am not one of those who discovered Japan on the map last week or heard for the first time of earthquakes or about nuclear power plants being around aplenty. To all of you insulting people who accuse me of jumping on the bandwagon even after I explicitly criticized such: Over 20 years is hardly jumping on the bandwagon last week.

To those who accused me of scaremongering: How dare you, right now in the face of yet another disaster killing people and only preparedness having saved so many, to call me a scaremonger for advising people to be prepared?

Now we read from another blogger here that, o-tone:

They are the people who probably need to have some potassium iodide pills handy, not you and I … if you are counseling your friends or your Facebook contacts to buy potassium iodide before it's too late, if you are spreading dark rumors about "conspiracies", you are behaving like an 18th century village wag fabricating tales of an imaginary Austrian army just down the road.

Let me here behave “like an 18th century village wag”: Nuclear power plants are all over the place in industrialized countries, so everybody everywhere should have potassium iodide tablets ready for their family members, just like everybody everywhere should have a personal straw-type water filter (at least one per person at home, one in the office), vacuum packed emergency rations and a few other items. If disaster strikes, be it an earthquake or whatever, it is mostly too late to get such items. Potassium iodide belongs into your home into the disaster preparedness kit, and if you have not got it, this is the reminder that you should get it now.

What do we learn from all this utter irrationality displayed? What does it tell us if science bloggers cannot read and people buy up table salt? Does it tell us that there is no problem with nuclear power? Or does this yet further prove my point: Humans are much sillier than they are aware of, too damn silly for table salt already, too silly for being able to read unbiased even if they have PhDs and work in science and technology for many years. It may just prove that humans are way too silly to be trusted with something as dangerous as nuclear power!

There is media hype. Yes, big surprise, big big surprise, is it not, that the media hype. Are science bloggers supposed to run after the media hype and clean up the mess, balancing it with going into the opposite extreme so that finally all is polarized into camps and the public cannot trust anybody? I for one disregard the always and in any case from underlying causes distracting and hyping media. I try to contribute to that at least some science blogs stay rational and can be trusted, no matter the current events.

I sincerely call on all science bloggers to stop being so naïve and easily manipulated via their love for science. Write from a truly scientific perspective clearly elevated above lines drawn in the sand, above repubs versus dems, above a simplistic worldview of all good science versus purported anti-science. It is partially science blogs’ fault that the public gets more distrustful of anything under the label science. After all, such is justified and to be advised, as there is ever more biased misinformation under that label.

Update: Your buying of Potassium Iodide now will not deplete stocks for those in need! It is a simple salt (formula: KI), and not at all like a flu vaccine or anything remotely complex like that. Don't even buy it in pills! They rip you off with those prices. KI costs next to nothing, much like table salt. Just get 500 grams pure KI from a chemical company and distribute it for free to all your neighbors, friends and colleagues. Read the labels on the picture above! 200 doses are only 26 grams - probably more than enough for your household's emergency kit.