How does an electrical torch or flashlight work? According to the usual description, the lamp inside produces light, this light is shone on the objects we desire to see, partially reflected from their surfaces, and finally some of that light is captured by our eyes. This is not wrong, but it somewhat distorts the fundamentals of visual perception, which is not about perceiving light but about perceiving differences.

Actually, all the objects around us send out light all the time, even if the room appears completely dark to us. This light happens to be mostly infrared light. Nevertheless, if seeing was just about detecting light from objects, evolution would have formed us to be able to receive that infrared light. The main problem with that light is: If something is at the same temperature as its surroundings, it will give off the exact same mixture of light as its surroundings. This mixture is called black body radiation. The black body radiation’s characteristics depend only on temperature. 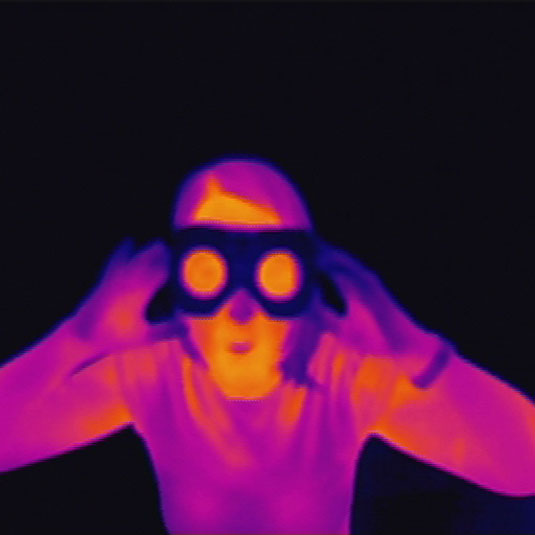 We see the stars not because they shine light but because their temperature is not the same as that of the background radiation. That the stars are hot is beside the point, as they would not be visible if the background were equally hot. So you would not be able to see a cold blooded animal like a snake on top of the rock it rests on. If object and surroundings are in thermal equilibrium, they cannot be distinguished – a ‘bright darkness’ like much of modern culture – intense maybe, but featureless – indistinguishable from the background of the noisy clutter

Ok, Ok, sorry, back to the thread: In order to see an object, we need to make the object send different light to our eyes – different from its surroundings. What a torch fundamentally does is to provide a spot (the filament for example) in its lamp that is much hotter than the object and its surroundings. The lamp’s reflector ‘bundles this difference’ into a beam that we can shine onto the object, thus disturbing the thermal equilibrium between object, surroundings, and photons interacting with them.

The object can now differ from its surroundings, because its surfaces’ self-radiated and reflected light components do not anymore add up to the previous black body radiation as it was present without the torch. It is immaterial whether that is due to the torch adding or reducing the light that the object can reflect into your eyes.

Straw-man: “This is stupid, because what really is bundled is the light coming from the filament in the lamp. If you were correct, then you should be able to do the same with an ice cube instead of a hot filament inside the lamp. However, you would not get a beam like you would get with a flashlight.” 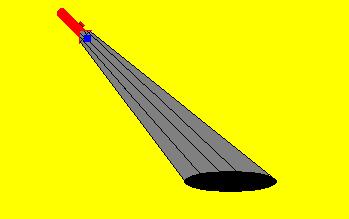 Well, this is exactly the point: If you include all the light that is already present due to the thermal radiation, an ice cube torch would indeed work similarly (if we were able to perceive infrared light of course). In fact, there would be a beam – a dark beam – and you could flash around with a dark-beam ice cube flashlight and shine it on objects and let them be visible in this way. I invite you to think it through some lazy weekend afternoon.

Observation/perception is about differences that make a difference, which is closely related to that life needs entropy differences and not just energy resources. A flashlight does equally not rely on providing some energy beam. Given the right circumstances, an ice cube could replace a candle.

[Yes I know, you can crank up light to stupendous intensities but cannot go below zero Kelvin. And of course the light that came from the background and that the object reflects into your eyes is always much more than the amount reduced by the ice cube lamp (even if it is a hollow cavity at zero Kelvin) – nevertheless, there is in fact a sort of dark beam where photons go one direction but none come back!]