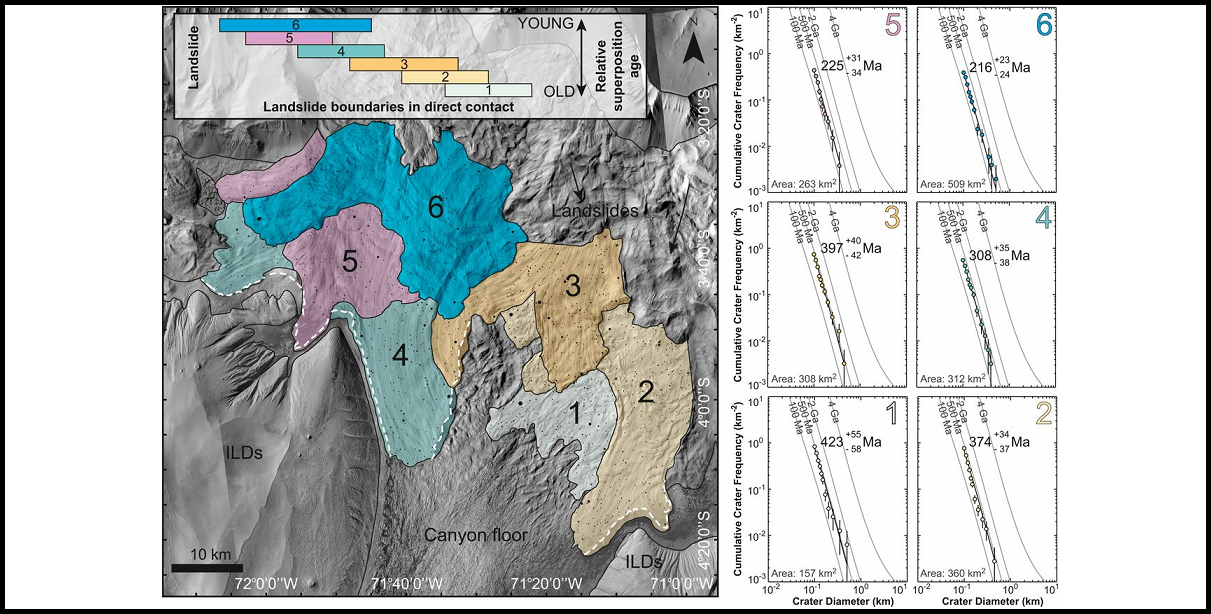 Landslides on Mars typically have runout distances much larger than equivalent features on Earth, and therefore can interact with older landforms that are distal to the failure scarp.

Regardless of the exact formation mechanism of these landslides, it is evident that their combined large area and relatively well constrained formation age can be exploited to better understand the evolution of coincident features, particularly if those features have been modified since the landslide event.

Now the researchers from the University College London (UCL) describe interior layered deposits on the Red Planet that have obstructed landslides before undergoing retreat by as much as 2 km. These landslides differ from typical Martian examples in that their toe height increases by as much as 500 m in a distinctive frontal scarp that mimics the shape of the layered deposits.

"The interior layered deposits are either extremely friable, if eroded strictly by wind, or composed of a material whose degradation has been enhanced by ice sublimation," scientists including Peter Grinrod of UCL reveal in a paper published in the September issue of "Geology". "These erosion rates also confirm that the interior layered deposits have been in a state of net degradation over the past 400 million years, suggesting that the process that caused net deposition in the past has ceased or slowed substantially on Mars relative to erosion."

Mounds of layered deposits, often several kilometers in height, are common in the canyons and impact craters of Mars. These interior layered deposits (ILDs) are high-priority targets for exploration because they not only preserve long sequences of the stratigraphic record of Mars, but also exhibit evidence for hydrous mineral phases that indicates aqueous activity. Despite their importance, no consensus exists regarding how ILDs form and evolve. Their volumetric contribution to the global sedimentary record is also unknown.

In this study we utilize the long runout nature of landslides on Mars and identify a unique region in Ophir Chasma, Valles Marineris, where ILDs have obstructed and diverted landslides. The age of the landslides is used to estimate the erosion rate of the ILDs and discuss the implications for the wider sedimentary history of Mars.
The researchers used NASA's Mars Reconnaissance Orbiter Context Camera (CTX) visible wavelength images (5–6 m/pixel) and stereo-derived digital terrain models (DTMs) at 20 m/pixel to map and characterize the terminal edges of long runout landslides. In one location, where CTX stereo coverage was insufficient, they used a (100 m/pixel) High Resolution Stereo Camera (HRSC) DTM and produced CTX stereo DTMs using standard methods, with the vertical precision of the two DTMs estimated, using previous techniques.
"We have identified three major occurrences of landslide deposits in Ophir Chasma that are indicative of obstruction and diversion by ILDs that are no longer present. These landslides differ from typical Martian examples in that their toe height increases at the landslide front, an indication that the landslides were obstructed," the paper reads. "The elevated toes show distinctive concave scarp faces that are as much as 500 m above the canyon floor and as much as 400 m higher than the immediate upslope region of the landslide. This process of landslide obstruction is demonstrated in Coprates Chasma, where landslides have ridden up between 500 and 800 m in height against bedrock material that has not subsequently been removed."
They conclude that the ILDs have eroded at rates that require the target material to be either friable and easily mobilized through saltation-driven eolian abrasion, or to contain significant cemented ice that has allowed rapid degradation, enhanced by eolian processes. Either scenario has major implications for the origin, evolution, and extent of ILDs across Mars.
Both mechanisms imply that ILDs are composed of easily mobilized materials, providing possible predictions for the grain size and cementing characteristics of ILDs elsewhere on Mars, including Aeolis Mons at Gale Crater, a location that will soon be sampled by the Mars Science Laboratory.
Credit: geology.gsapubs.org
Astro Watch
More Articles All Articles
About