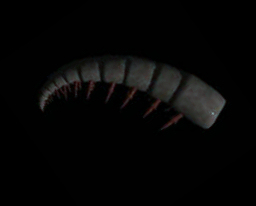 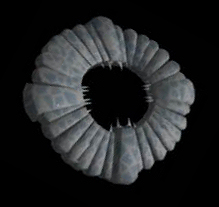 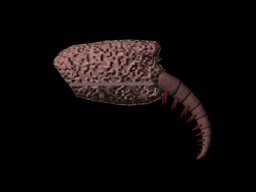 The answer is Anomalocaris, a very unusual fossil from the famous Burgess shale.

Anomalocaris is a poster child for one of the most annoying aspects of paleontology: the fact that, rather rudely, body parts are not all made of the same stuff, and moreover, some animals have the cheek to rot and fall apart after they die.

The original "Anomalocaris" referred to this fossil below, which was assumed to be the body and tail of something like a shrimp,

...Derek Briggs saw that they were in fact appendages of a much larger, truly gigantic, arthropod.

Meanwhile, the true nature of Peytoia, previously assumed to be some sort of strange jellyfish, was also in question. 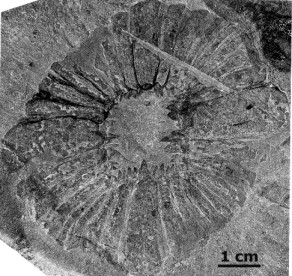 The breakthrough came in 1981, when Briggs as well as Harry Whittington were working on specimens of the above as well as Laggania, and recognised that they were all part of the same animal. Later, some complete examples were found. 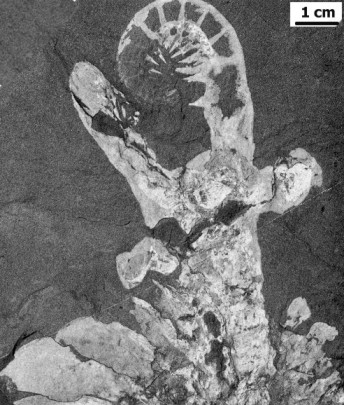 Anomalocaris was probably a pretty fearsome predator in its day, with those wide eyes and powerful swimming lobes suggesting a fast and accurate hunter.

Stefan Bengtson once said with regard to the Burgess shale fauna, to which Anomalocaris belongs, "Nature has a way of outshining our most speculative hypotheses". Unusual body plans such as Anomalocaris' really were the norm, and a Cambrian visitor to modern day oceans would probably gasp at the lack of diversity. Somewhere in those oceans would have been an ancestor of boring old us; something akin to Pikaia - a rather feeble thing that Anomalocaris may have very happily chomped on.

I think the Cambrian is definitely the time period that I would like to visit, just because the ecosystems are so different. I think, as soon as we have a time machine, we should put David Attenborough in it with loads of film reel and ask him to make a documentary. Then, he could seal it and store it somewhere geologically stable, like the middle of the African shield or something. Then, 500 million years later, we could go and uncover this fossilized film reel, and watch these things in action!

I'm going to be on fieldwork (in Ontario, Canada) so I might be slow to reply to any posts, if at all - sorry about that.
Between Death and Data
More Articles All Articles
About