Oliver Knevitt
This rather sorry creature can be found in a lab in the ROM, hidden away with some old CRT monitors, 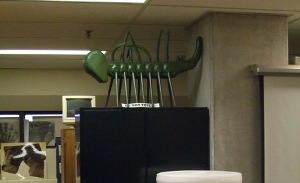 This guy is Hallucigenia, another fossil from the exquisite Burgess Shale fauna - a contemporary of Anomalocaris of last week's friday fossil.

Hallucigenia is one of the weirdest - and most infamous - fossils to come out of the Burgess Shale - which is really saying something. So why, if it's so famous, is this reconstruction tucked away at the back of the ROM?

Well, that's because it is upside down.

In 1977, it fell to Simon Conway Morris to interpret this strange beastie, which was known from a handful of specimens. Because it seemed to have two rows of projections on one side and and one row on the other, he concluded that the single row of smaller, stubby projections were on the thing's back with each one having a little mouth, and it walked stilt-like on the longer, spiny appendages. No clues for guessing why he called it Hallucigenia.

Whilst many were uneasy with this interpretation, because there was a lack of fossils to work with paleontologists reluctantly let this one quietly rest. That was until Lars Ramskold, upon examining more fossils of Hallucinogenia this time found in China, wanted to test his hypothesis that there was actually another row of stubby appendages that was just not being seen. Very unusually, the Smithsonian allowed him to literally deface the holotype (the sacrosanct type specimen, which new species must compared with) by flaking off a layer of the shale. And, lo and behold, one lamina down, was another row of appendages. So they were legs after all.

Everyone is fairly happy with this interpretation now (including Simon), and what was thought to be a gigantic head is now more commonly thought to be an organic stain, and actually at the rear of the animal - hence Hallucigenia has been flipped upside down and back to front. Now, Hallucigenia tends to be allied to the onychophorans (velvet worms).

The story of Hallucigenia is like the story of the Burgess Shale fauna in a nutshell. In the early days of Walcott, the chap who discovered the outcrop, weird things like Hallucigenia were shoehorned (Walcott's actual words) into a modern taxon of least discordance. Then came the Wonderful Life generation, when they were viewed as weird, but ultimately failed offshoots during a very experimental phase in Earth's history - when things like an worm walking rather comically on stilt-like spines did little more than raise a few eyebrows. Nowadays, we tend to view the animals of the Burgess Shale as members of a hugely diverse fauna, who experienced the same evolutionary pressures as animals have throughout the rest of Earth's history. They are consequently more closely related and increasingly more relevant to modern day faunas then we ever believed.