Oliver Knevitt
I think most people - certainly myself - get that grim "what, another one?" feeling when you first hear news that there has been a big earthquake.

But is it justified? In other words, have we recently been experiencing an increased rate of earthquakes? This from Beroza (2012),

You might argue that this is a consequence of better instrumentation and better reporting of these large earthquakes, and in part, this is true. In 1931, there were about 350 stations; today, there are more that 4,000 stations, and the seismographs we use to measure them on are much more sensitive. Thanks to the web it is now possible to find out about earthquakes within minutes, rather than weeks

Not only that, but earthquakes have a much bigger impact than in the past. You may have noticed that the 2010 Haiti earthquake - by far the deadliest natural disaster in the history of the Western hemisphere, killing over 200,000 people, was missed off of the list above. This is because the magnitude of the earthquake, 7.0, was not that exceptional. Port-au-prince, is just unfortunate, like many other unfortunate recent urban developments, in having sprang up clustered around a fault plane and having a very fragile infrastructure. So earthquakes have recently become much more prominent due to their swollen death tolls. We can add to this the "mean world" effect, where things seem a lot worse recently due to a rather voracious media.

However, though these explanations go some way to explaining this recent apparent rise in the number of large earthquakes, it doesn't exaplain the fact that this exact sentiment has been expressed before. People were also asking the same questions in the 60s, after there was a cluster of earthquakes during the period from 1950 to 1965.

So, could large earthquakes cluster? If true, this would revolutionize our current understanding of tectonics. Because, it implies that either one large earthquake can somehow trigger another one many miles away, or that over a short time scale global tectonics has sped up.

In some ways, it's not completely unreasonable that one earthquake on one side of the Earth can trigger another on the other side. When a large earthquake goes off, the Earth literally rings like a bell, sometimes for as much as a month afterwards. Smaller earthquakes do in fact cluster in space and time. They do this according to Omori's Law, namely that the frequency of aftershocks after a large earthquake decays inversely with time. This essentially due to the way that the shock from the major earthquake causes all the other faults to slip. So, maybe an earthquake in Chile could indeed cause a fault to slip in Japan.

Charles Bufe and David Perkins have analysed the statistics and concluded that during the 1960s and recently there has indeed been an increased rate of earthquakes. They suggested that this global triggering could be caused by,


I'm not going to attempt to explain these (they certainly didn't) because that's not the point that they're trying to make. The point is: big earthquakes seem to cluster in time.

Are they right, then? Let's have a look at that graph again, and look for some non-random looking features,


You could dismiss these as a trick of the eye, but in fact, it is possible to back this up with statistics. The five-year running average is actually at a record high currently. Bufe and Perkins spotted this, and, calculated that the chance of the Earth experiencing 7 of the 9 magnitude 8.6 earthquakes within a 14.5 year time frame was the insanely unlikely 0.2%.

That would seem pretty conclusive that big earthquakes have been clustering recently, right? 0.2% is a pretty low number. And this was not a simple bung-it-into-excel calculation; this was using a Monte Carlo simulation and comparing it to a Poisson process; a very reasonable way of calculating the likelyhood.

So why is it wrong? 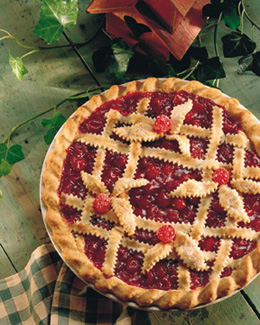 Well, essentially, Bufe and Perkins are guilty of post hoc cherry picking. Here, the cherries are the M 8.5 earthquakes. Why pick only M 8.5 earthquakes? It's after all a rather random threshold to have chosen.

Shearer and Stark (2012) have noted that if you do decide to define your goalposts in this post-hoc way, 30% of your estimates will in fact be less than 1%.

But what about that enormous gap of large earthquakes from 1965 to 2000? Even being good and using a null hypothesis, it turns out that the probability that 16 events in a 111-yr interval would contain such a long gap is only about 1.3%.

Without realising it, (or maybe you did, if so, you can feel nice and smug), we've fallen into the same trap. As you might gather, it is very tricky not to cherry pick when you are looking at data like this. Essentially, any randomly generated graph will have particular features that will look unusual. 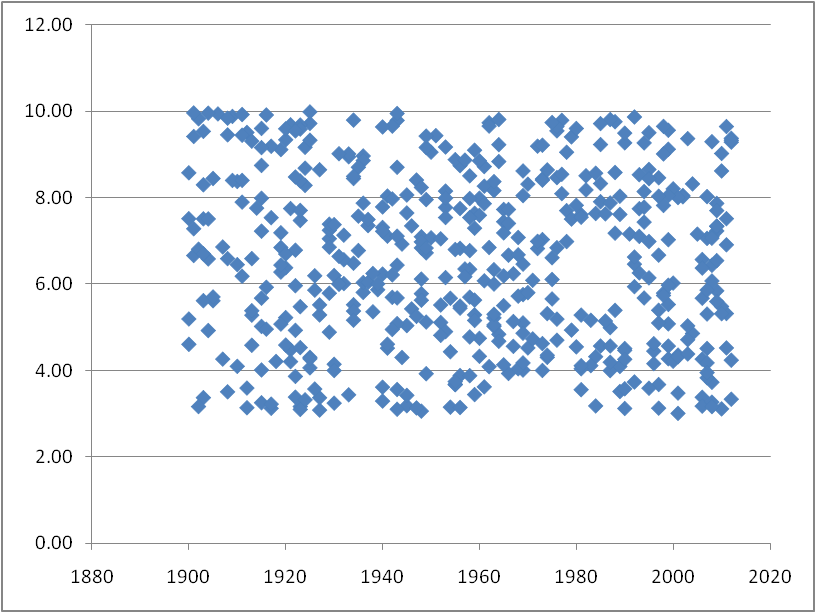 Isn't it spooky how there is a lack of magnitude 6 earthquakes from 1970 to 1990? If I was to find the likelyhood of this gap, it would be vanishingly low. But there are always little oddities like this in random graphs like this. It's a bit like that famous Feynman quote,

You know, the most amazing thing happened to me tonight. I was coming here, on the way to the lecture, and I came in through the parking lot. And you won't believe what happened. I saw a car with the license plate ARW 357. Can you imagine? Of all the millions of license plates in the state, what was the chance that I would see that particular one tonight? Amazing!

This is not the end of the story, however. Although statistically, large earthquakes do not cluster, it is still possible, however, that rate changes could be partly responsible for clustering. We can only find our answer empirically, or, failing that, through a plausible mechanistic explanation.

Given that the last three magnitude 8.5 earthquakes killed over 16,000 people, this will be a rather bittersweet proof that earthquakes cluster.