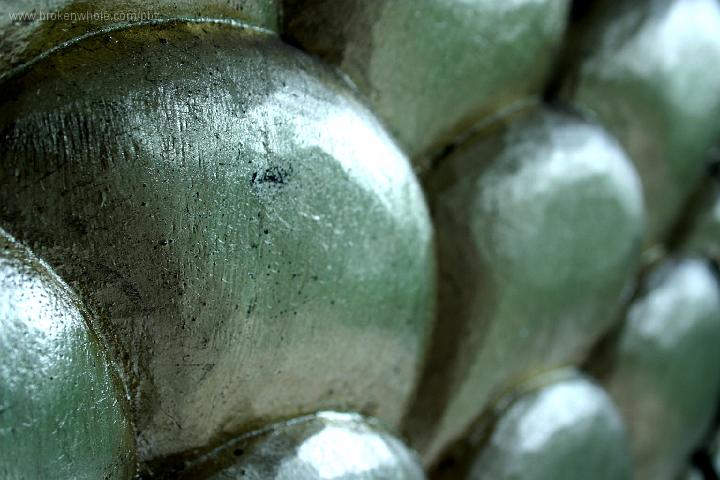 During my one and only severe manic episode, during the summer of 2006, I had the scariest half hour of my life where I thought I was literally in danger of losing my sanity. I found myself wondering, the other day, if something like this was a common experience of mania. I don't think it is, because I've never read of anybody else going through something like this.
(Photograph by Keith Adams, 2006)
It was on the day that my (as yet undiagnosed) mania really took wing (this was a two or three weeks before I was first diagnosed with bipolar disorder), and I was being flooded with a million thoughts and ideas. The day had started with an idea that I thought could change the world economy, and as I thought things through, I saw ever expanding vistas of possibilities open before me by the second.I left my house so sure that I was on the verge of becoming incredibly rich, that I didn't even lock my house, thinking that I'd never return - I'd rent a luxury hotel room, and have people move the stuff I still valued.

For the next few hours, I was so sure of my powers to both understand the world and manipulate it, that I set myself ridiculous challenges. I left home deliberately with no identification, and decided to see if I could get a new cell-phone, with service, and rent a luxury car, and succeeded at both. Without ID, I obviously couldn't drive the car, but I hired somebody from a local store to drive me around.

As we drove, the ideas wouldn't stop coming. I started to tell my driver about the new philosophies I was spinning up at will. For a couple of weeks, I'd already thought myself the most intelligent person who'd ever lived (I was wrong, needless to say), but I continue to sincerely believe that when you're manic, you can access parts of your brain that normally lie dormant, and that you're capable of moments of sheer brilliance, and piercing insight.

I asked myself, while my driver drove me back to my house (I was tired, and my powers hadn't extended as far as renting the luxury hotel room without ID), if I'd expanded in the emotional, moral and intellectual dimensions, how come the spiritual domain remained closed to me. And I literally felt as if the ground opened up, as I started to have the most incredible series of thoughts yet (which I'll keep to myself, for now, because they'd probably make you think I'm truly crazy.)

Just then, my old cell phone rang, and it was my partner Ben, who, for weeks, had become increasingly worried about my behavior. He's a doctor at UCLA, so had recognized the signs of mania. Moreover, his previous partner of nine years had had bipolar disorder. (Yes, he really can pick them.) I could hear tears behind his voice. He'd arrived for our couples' counselor appointment to find me absent,

Immediately, making that appointment, all the way on the other side of Hollywood, became the single most important priority. I felt an overwhelming need to protect Ben from the anxiety of worrying about my behavior. But because my mind was already filled with enough thoughts and ideas to keep my mind churning for months, this new priority couldn't be assessed rationally. As I raced across Hollywood after having abandoned the car due to traffic, I'd continually slip into the sense that making the meeting was life-or-death. My mind was running away with itself.

I somehow realized what was happening, and had the sudden realization that it was time to start worrying about myself, because I knew I was in danger of losing my mind. Yet the next second, I'd look at my watch, and take off again. I ripped my watch from my wrist and tossed it into a parking lot, along with my brand new cell-phone, in the hope that if I could no longer tell the time, I could let go of some of the sense of urgency. But it was no good, and I began to panic as I felt rationality to be slipping away. I knew I had to be medicated immediately with something to slow down my mind. I tried to get a drink at a restaurant on Sunset Boulevard, but when they were too slow, I marched into the bar, and grabbed a bottle of tequila, and walked off down the street, swigging back the bottle.

After more excitement which included pouring the bottle of tequila over the counter at a 7-11 in an effort to force the clerk to call the police, I finally began to gather the threads of sanity together, and I realized that the crisis was resolving. Nonetheless, I was scared that the guy at 7-11 would call the police, and, for some reason, I envisioned bullets flying. Fortunately, it's next to impossible to summon the LAPD for anything short of homicide, and they never came. Twenty minutes later, my partner Ben picked me up from the parking lot opposite the 7-11, and the crisis was over (apart from somehow having to explain to Ben what had happened.)

In the movie Star Trek the Motion Picture, Spock attempts to mind-meld with Vejur, an artificial life-form with experiences that spanned the universe. His mind is overwhelmed by the flood of information, and shuts down. That was how I felt that day in Hollywood. I wonder what would have happened if I hadn't been able to self-medicate.

Keith Adams, author of Broken Whole: a California tale of Craziness, Creativity and Chaos
, to be published 2010 by Chipmunka Publishing.
The Bipolar Universe
More Articles All Articles
About