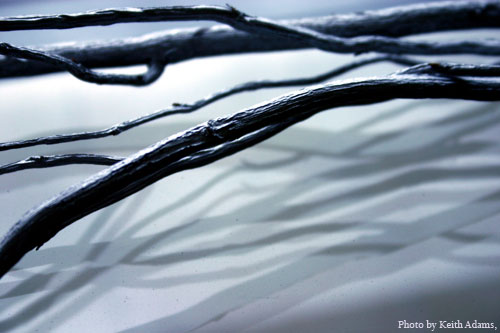 Having myself thought I was going insane at one point, I should be very careful in using the word "kook" about anybody. But have no fear; I'm libeling an entire state: California, of course.

I don't know when I first realized that Californians harbored a greater array of strange beliefs then most places. Being a rational humanist and atheist, I was, at the time I moved to San Francisco over fifteen years ago, somewhat dismissive of "weird" beliefs. But at least I was equal opportunity: to me, the established religions, the supernatural, the Loch Ness monster, flying saucers, astrology, the power of crystal, and all invisible, mysterious forms of energy were all in the same pot full of kookiness. (Although it turns out I was dead wrong: the Universe really is full of a mysterious form of energy we can neither see nor directly detect, but that determines the fate of the Universe: "dark energy.")

I remember an early date in San Francisco, with a cute hairdresser. Any ideas of a second date went out of my head when he started talking about an encounter he'd had with telepathic dolphins in the Gulf of Mexico. The funniest thing is that I told Cecilia, my physical trainer, about it the next day, expecting her to laugh, but instead she looked at me quizzically: "You mean you don't believe dolphins are telepathic?" I didn't, however, dump her: I didn't require that my trainer not have strange beliefs. It frequently gave us things to talk about during our three-times per week sessions.

Cecilia believed in, and quoted multiple instances of, synchronicity in her life, the belief that multiple seemingly separate events coming together form a message. She's still a dear friend of mine, so I won't rehash in public the discussions we had about it, but the weirdest part of this story is what happened to me during one training session, several years ago. I'd had periods of shortness of breath in the prior few weeks, but this time I couldn't get my breath. I was on the edge of panic, and Cecilia hurried downstairs to get the manager. Abruptly, my body started to crawl with the sensation of pins and needles, and I felt that I was losing control of my muscles. I grabbed somebody and jerked out the words, "I need help". I was carted to Davies emergency room in an ambulance. It was hyperventilation, but since I’d never experienced it before, I'd not recognized it. They gave me a Xanax and released me.

What does this have to do with synchronicity? Well, I went to bed that night with the phone on my bedside table in case I had another attack (ordinarily I switched the phone ringer off overnight). Strangely, the phone rang after ten. It was my practice to not answer the phone unless I recognized the number, so I ignored it. But when it rang again first thing in the morning, my intuition told me exactly what it was. My mother had died.

For Cecilia, of course, there was no other way to interpret this than as synchronicity; and I can imagine that many if not most of the people reading this think the same. My own belief was that it was a complete coincidence. My mother was in an advanced stage of Alzheimer's, and her death was not wholly unexpected.

And yet for all my skepticism about non rational belief systems, there's a strange story in my life. It happened, as did half of the strange events of my life, in the second half of my forty-first year when I started to become manic, massively so, en route to a diagnosis of bipolar disorder. During that time, when I believed myself capable of anything, I developed, for the first time in my life, genuine spiritual beliefs. (Note, by "genuine" I mean not superimposed on me from outside. I had a brief dalliance with born-again Christianity in my tender youth.). In particular, I began to believe in the concept of karma.

It started with a tiny kernel of an idea, and it was a rational idea at that. For the first few months of my manic episode, I’d thought merely that I'd finally recovered permanently from chronic depression. All of my interactions with people felt blessed, and, in particular, both my partner Benhur Lee, a research doctor at UCLA, and I felt that the reason we'd become part of a large, wonderful group of gay friends in West Hollywood was because we brought "good karma" with us. In other words, we gave out positive energy, and people responded to it.

Mania is fueled by ideas, some of them great, some of them not so, but all pursued with ardor. My manic mind took up the idea of karma and ran with it, blowing it up to massive proportions. I’d barely been back in LA for a day, after coming back from a week of hell in Dallas during which I’d nearly resigned my job, to find out I was on short-term disability leave. And during just the first few days of my leave, I’d already thrust myself into the (not so great) idea of building a gay super-club in West Hollywood. And it was going to be called, what else: karma.

The manic mind consumes thoughts voraciously, and the individual who bears such a mind can fit into a period of days activities that would take a whole book to describe. The craziest day of that week was on Friday, where I had another (even worse) idea that I genuinely thought would alter the world economy. (I’m not kidding here. I mean about the idea. Needless to say, you haven’t heard of me, and therefore can feel free to conclude that I didn’t change the world economy.) This was the moment that truly ignited the fire in my mind, and I felt my mind expanding simultaneously in all directions.

The details of how I ended up, mid afternoon of that day, being chauffeured in a rented Lexus by a stranger, named Myles, I’d hired, for a hundred bucks, from a store in West Hollywood, are not important (or, are rather too involved to relate here). But I'll never forget one of the moments of that day. I can see everything clearly: the position of the car, the color of the weeds at the side of the road, the feeling that my neurons were alive with electricity. I was being driven home by a man named Myles. I was coming up with new philosophies, explained in a rapid, excited chatter to Myles, at the rate of one a minute, way too fast for Myles to even respond. And the first time he got a word in was not to say “Like, wow, that’s amazing man!”, but to ask, instead, pointing to my midriff, "That's an awesome belt you’re wearing, what brand?"

I believed I’d been saying mind-blowing things. (When you're manic you can access part of your brain that is usually shut off, and I continue to maintain the belief that you can, under such circumstances, have moments of sheer genius. That is one of the reasons many bipolar people find mania so hard to resist.) I kept expecting Myles to ask to pull over, or even crash the car. But when he asked about my belt, it not only brought my exposition to a tumbling stop, it made me smile with the realization that it was karma that Myles was my driver; anybody who was less grounded, or so I thought at the time, would have crashed the car.

Of course, after I’d laughed, I launched into explaining my concept of karma, and was soon off again. (I no longer believe it was karma: it was a combination of luck, and also the probability that most people would have just been content to let me babble.)

We continued to drive, rounding the corner from the bridge over the freeway, and I thought to myself that I'd expanded in just one week in four dimensions: morally, intellectually, emotionally and physically; where was the fifth dimension: the soul? And as if by the switch of a lever, a door was opened, and that new dimension started to flood my mind with new ideas. I won't say what those ideas were (they're too kooky and scary for this blog), but it was the first genuinely spiritual moment in my life.

That day ended in extreme crisis. But I learned many things, when forced to extremity. That evening, attempting to cope with a mind running dangerously fast, I accidentally discovered meditation, and the spiritual use of pain. And in the days that followed I learned something that has stayed with me ever since, which sounds awfully like the sort of gauzy spirituality I’ve long steered clear of, recounted in an essay "the green pebble", and that is simply the knowledge that we are all indeed connected. But not in any supernatural sense: it's by our common humanity. We, all of us, are a mass of potential interfaces connecting us to others: shared beliefs, common experiences, thoughts that we keep to ourselves, the detritus of a life of mental activity. And if we can keep this front and center, and be mindful of it, it can affect our behavior to others.


After having gone through all this, and recovered from my manic episode (which lasted from July to October of 2006), I'd now have to describe myself, if asked, as a spiritual person. But spirituality will always be intensely personal for me, in the sense that my spirituality is uniquely mine; I found it on my own, and I don't expect anybody else to share it or add to it.

Wow, I really didn't set out to write about my own spirituality. This was meant to be an article about kooky Californians, and their strange believes. Yet just because I read an article, by Roberto Blain, online about synchronicity, I ended up talking about my own encounter with it. You could almost say that it's karmic, but I won't. I'm sure Blain would call it "synchronicity" though.
The Bipolar Universe
More Articles All Articles
About