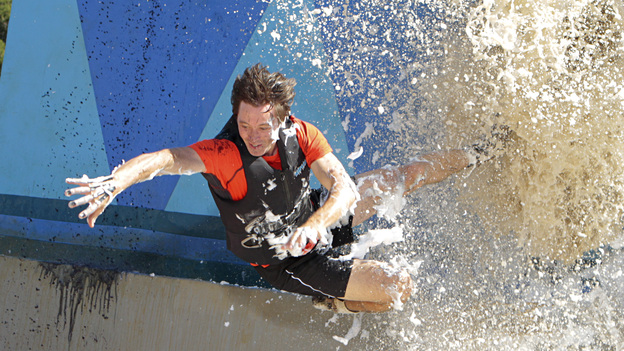 I hope you didn't see my first-to-worst performance in last night's hotties vs. nerds edition of ABC's WIPEOUT. If you did, you know what happened: after winning the round of 24 by almost a minute and then winning the round of 12 by the equivalent of a furlong, I got stuck in the round of six trying one element over and over -- the wrong way -- as people I had beaten in the first two rounds passed and eventually eliminated me.

Nuts--'twas a very good shot at $50k that my family of four surviving on my writer's salary could've used.

Anyway, while it just aired last night, it's been a bit since the filming and I find I'm having kind of a hard time letting it go. Why oh why couldn't I see that if I'd just dangled my legs off the spinning bar, it would've draped me across the target platform? Instead, I hopped on top of the bar, rolled off it, and hit the landing platform with a momentum that carried me off the slick edge and 20 feet into the water...over, and over, and over. There's a clip online and it's painful to watch. At least it is for me. You're probably laughing. And for that you're going to hell. But I digress.

In this game in which contestants seem to have a median IQ of about 74, I lost not on athleticism, but on poor problem solving. But the thing is, I'm actually a halfway decent problem solver: I've contributed puzzles to the New York Times and am a puzzlemaster at the GeekDad blog.

Don't blame the stress. Despite recently having my head taken off by a hydraulic panel in a mock driver's ed course, being shaken from a 30-ft sailboat's mast, bouncing the wrong way off the idiomatic big balls, and being scraped off a platform en masse with my competitors by egg-beating rings, at the start of the round of six I was feeling pretty hunky dory. I'd done fine under pressure in the first two rounds by artificially whipping myself into a froth of invincibility. I'm good enough, I'm smart enough, and doggone it people like me, I told myself over and over and over until I started to believe it. Thus prepped, I imagined myself with an S on my chest, supremely confident and ready for anything.

This overconfidence isn't my normal state, but I use it sometimes when climbing rocks or speaking to groups, and it served me well in the first two rounds of Wipeout. On the show, it allowed me to think that if an element was hard for me, it MUST be hard for everyone else. When I got pummeled by driver's ed, I quickly wiped the cold, gravelly mud out of my eyes and jumped right back on the course, imagining that I was still very much in the game.

Massively egotistical? Yes. But it works. A little overconfidence can land a presentation at work, a date in a bar, or, in my case, the assertion to my three and five year olds that certainly it's bedtime.
I brought this same artificial overconfidence to the round of 12, where 100% effort (and long chicken legs...) actually was the secret to success.

Now to the round of six. It was hot and before we started instead of standing around chatting with the other contestants, I stretched, did a couple sprints, and poured many a free bottle of water down my black life jacket. In short, I acted like an overconfident tool, which is what I had become at that point. And I expected that as an overconfident tool, I was bound for the glory I have seen so many overconfident tools claim over time.

Finally, the day of the geek had dawned.

I was first off the swings, first to stick the exit from the spinning platform, first onto the rotating helicopter blade, and first to attempt the exit from the spinning bar onto the pig-mud-slick platform. Of course, I fell the first time. No worries. If it was hard for me, it MUST be hard for everyone. I put my head down and kept trying. 100% effort.

But the key was this: I put my head down. Actually, I'm kind of prone to this strategy I'll call suffice and execute. And usually it works out--usually my "suffice" is within the ballpark and a little extra effort is better than spending two minutes to find the most efficient way that saves 30 seconds. Having quick, good-enough solutions is part of what allows me to froth into overconfidence when I think it's needed.

I do things like slogging through slide alder to the base of a climb instead of wandering around to find the streambed that leads directly to the rock face. In chess, I let my pawns become cannon fodder while I set up a knight/queen attack against my preternaturally talented five year old who, nonetheless, can't bear to lose a pawn. I steamroll off message in radio interviews, confident that we'll find humor and (maybe even sometimes) insight off-the-cuff.

That is, until it doesn't.

It seems the strategy of suffice and execute is prone to frequent success punctuated by infrequent bouts of catastrophic failure. By now you've seen the tape. Need I say more? (By the way, when the windmill crushed my C2, yes that actually does hurt.)

It's the strategy that led Hannibal to march his troops over the Alps, led the scientific community to believe in the hoax of Piltdown Man for 40 years, led Lord Kelvin to say in 1895 that heavier than air flying machines were impossible, and can lead a country headlong into an intractable war. In short, it's a major reason why smart people do stupid things.

In my life, and I think elsewhere, overconfidence creates blinkers and it took watching myself act like a robot idiot on Wipeout for me to see it.

So what will I do next time I get a big chance?

It seems to me the step that's missing is revision. Suffice and execute may still be the answer 90% of the time, but I need to install in myself a circuit breaker that recognizes when things aren't working and flips the switch back to the strategy generation portion of the ol' suffice and execute. In the moment, I need to know when to go back to the blackboard. And maybe I need to dial down the artificial overconfident froth, allowing me to admit a strategy is flawed.

Confidence and follow-through with a strategy is great. It can land a mediocre approach. But after rolling off the top of a spinning bar and sliding into the water for the fourth of fourteenth time, maybe it's time for me (and maybe for you?) to take a look at the strategy that got me there?