Schistosomiasis is a parasitic disease that infects 243million people worldwide, and kills about 200 thousand every year. Theinfection is contracted through contaminated waters, and in the developingworld, where is most common, is 2nd only to malaria in rates of infection andpublic health impact.

To make things worse, women, already one of the most vulnerable groups in these regions, often develop infertility secondary to the infection, with the parasite being a main cause for the problem in these regions . Places where female role is centred on being a mother, and gynaecological medical care is next to inexistent.

But there is good news from a study by scientists in Portugal and Angola: Julio Santos, Monica Botelho and colleagues have found catechols (molecules similar to oestrogen, the female sex hormone) in the urine of infected females, that seem to be produced by the parasite and associated with the infertility. If theseresults are confirmed - and catechols are already known to exist in the bloodof schistosomiasis patients - testing for these molecules in the urine, couldbe an easy and non-intrusive way to identify infected women in risk ofinfertility to fast track towards urgent medical care.

But not only that ascatechols have been linked to cancer development and another complication ofschistosomiasis is bladder cancer. What this suggests is that the same urinetest could be used to detect a risk for bladder cancer in infected patients aswell.

The development of such tests would have important implications forglobal health: not only there are millionsinfected at risk of developing cancer and/or infertility, but urine testsare easy and cheap to do (crucial in poor countries) and they do not clash withcultural believes, like gynaecological or even blood assessments can. And withschistosomiasis already endemic in 76 of the poorer countries in the world, wedo need all the help we can gather to detect and control the infection and itscomplications.

The work from the Departmentof Health Promotion and Chronic Diseases of the National Institute ofHealth at Porto will be published in the journal PLOS ONE on the 22nd of May.

Schistosomiasis iscaught on contact with contaminated waters, when the parasite larva released byinfected snails enters the skin. The larvae can live in our blood vessels up to5 years releasing eggs, which once excreted to the outside will again infectsnails restarting a new parasite’s life cycle. 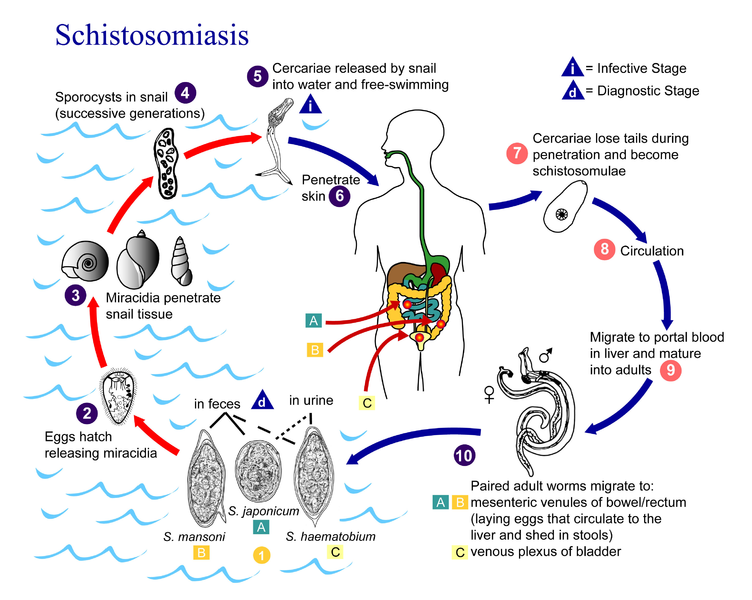 The problem is that many eggsget stuck on the patient’s tissues and organs on the way out, triggering animmune response, inflammation and tissue destruction. When the parasite isSchistosoma haematobium (S. haematobium),which is most often, the organs affected are part of the urogenital (urinary and gynaecological) system.

In women, thecervix and the uterus are often affected leading to female genital schistosomiasis, which causesinfertility as well as bleeding and pain during sex. This is particularlyproblematic because in these countries where information is restricted, this isthe type of problems that lead to abuse, stigmatization and other negative socialconsequences for women, as fertility remains central to their identity anddiscussion of sexual problems taboo.

Until veryrecently, the bladder cancer and female infertility seen in schistosomiasis patientswere believed to result solely from the tissue death caused by the immuneresponse against the trapped eggs. But Botelho’s group, which has been workingin S. haematobium for many years, haverecently challenged this idea when they discovered that the blood ofschistosomiasis patients contained parasite oestrogen-like molecules capable oftriggering cancer. So can the infertility seen in infected females beassociated to these catechols too?

To investigateSantos, Botelho and colleagues, in collaboration with fertility specialistsMário Sousa and Alberto Barros, and the clinic of Sagrada Esperança in Angolathat supplied the samples, analysed the urine of 93 women from an Angolan region endemic for S haematobium. They looked for parasite eggs andoestrogen-like molecules, trying to correlate these with information on urinaryand genital problems (including fertility issues).

What theydiscovered was that the urine of infected females (positive for parasite eggs),but not of healthy ones (negative for eggs) often had catechols, and that thesewere associated with infertility, whether this meant less children or nochildren at all

So what do these catecholsdo? Botelho had shown that they can down-regulate oestrogen receptors blockingthe action of the body’s natural oestrogens, which act through these receptors(increasing oestrogen levels in the body). In addition, catechols can triggerDNA mutations. Botelho explains: “Oestrogen metabolism/ degradation is a normalbody process – oestrogens are degraded into catechols and these into quinones.But if there are too many quinones (due to an excessive oestrogen production oraltered metabolism) this can cause DNA damage, because they tend to bind to DNA,disturbing it. Now we detect these molecules not only in the serum, but alsothe urine of patients infected with Schistosoma, while uninfected patients donot have them. They have been linked before to cancer (thyroid, breast andprostate) and auto-immunity (when the immune system attacks the own body). Nowwe see them in infertility associated with schistosomiasis infection.”

So whether by changingthe hormonal environment (hormones are known to affect the immune response too),and/or by increasing the chance of mutations, the catechols produced by S. haematobium will have, no doubt, a role in the bladdercancer or infertility we see in these patients.

And why is this soimportant? “Because from the estimated 70 million childrencurrently infected with S. haematobium,approximately 19 million will develop female genital schistosomiasis in thecoming decade, and most of these willbe affected by eggs trapped in their reproductive organs” say the researchers. Onthe other hand, bladder cancer in regions where S. haematobium is endemic is often the most common type among men, andthe second in women just behind breast cancer. To make things worse not only these complications can still occur evenif the infection is cleared (since the parasite’s eggs are left behind), butalso the number of S. haematobiumcases is probably much greater than estimated - perhaps as much as three timesmore.  So the possibility that catechols in the urineof schistosomiasis-infected patients could be used as a prognostic tool forhigh risk of bladder cancer and/or infertility in these patients, is nothingless than fantastic news.

As the researchers put:” development of non-invasivetests especially for femalegenital schistosomiasis with its potential for infertility if accomplished, shouldimprove the public health in under-resourced and under-served populations.”

A question remains though - why does the parasiteproduce estrogenic molecules? A possibility is that the aim is to reduce thedensity of the bladder wall (a known effect of increased estrogens) to help theeggs excretion. Another option is that manipulation of the host’s hormonalenvironment improves somehow the parasite’s living conditions.

PLOS ONE manuscript PONE-D-13-46559, “Urinary estrogenmetabolites and self-reported infertility in women infected with Schistosomahaematobium,” has been assigned a tentative publication date of May 21st, 2014,at 5pm Eastern Time