Catarina Amorim
About 200 million people across 75 of the poorest countries in the world are now infected by the blood parasite Schistosoma haematobium (S. haematobium). The infection causes severe urogenital disease, but also causes bladder cancer in a number of patients and why this occurs is not clear.

Now a group of Portuguese scientists believe they have the answer – their research shows how the parasite’s eggs can make human bladder cells behave as cancerous cells. And the key to that – according to the first author of the work Mónica Botelho– are catechol oestrogens, a molecule derived from estrogen (the sex hormone) that was found by the researchers in the eggs and is known to be highly carcinogenic (causes cancer).


The research, a collaboration of the CECA/ICETA from the University of Porto, the National Institute of Health in Porto, Portugal and the George Washington University, US could be a first step towards one day be able to identify S. haematobium infected patients at risk of bladder cancer or even prevent the cancer by targeting catechol-oestrogens. Schistosomiasis is also associated to fertility problems and the newfound molecules might hold the key to also understand this.

Schistosomiasis, despite the numbers infected, remains a neglected tropical disease that affects the world’s poorest with a socioeconomically impact in the developing world only second to malaria. The disease is transmitted to humans by freshwater snails from contaminated waters, with the worms entering our blood stream to release eggs that become embedded in the bladder wall where they cause chronic inflammation and, in some patients, lead to bladder cancer. 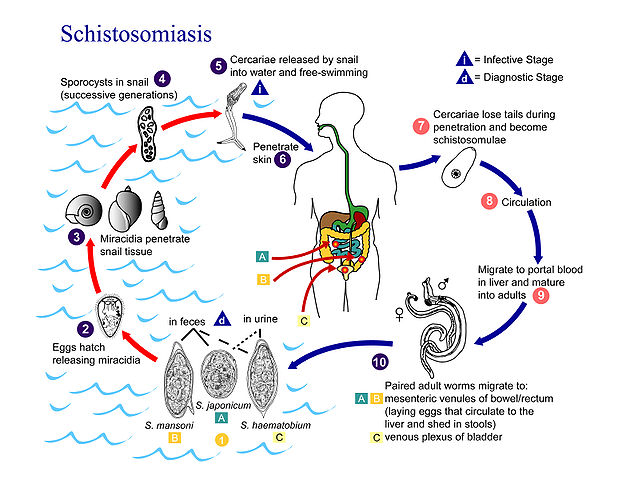 How common is this carcinoma among parasite-infected patients is difficult to know because the most affected countries are also the world’s poorest with scarce or even non-existing disease recording.

Nevertheless, in Egypt, disappearance of S. haematobium saw the type of tumors associated with the infection going from being almost 80% of all diagnosed bladder cancers, to less than 27 %, suggesting that the infection leads to a significant number of cancer cases.

Botelho and colleagues have been investigating this relationship for many years, and shown already that extract from the adult worm could make animal cells acquire cancer-like characteristics and even form tumors if injected into mice with no immune system, further proving the parasite-cancer link.

Following the finding that Schistosomiasis’ patients had higher than normal levels of oestrogens  Botelho and colleagues also discovered new estrogenic molecules released by S. haematobium. These molecules down-regulate estrogen receptors effectively blocking the host’s oestrogens (that act through these receptors).This, as Botelho explains “was an important clue because we know that oestrogen receptors are reduced when cancer becomes more invasive”.

The new molecules were later identified as a combination of DNA and catechol oestrogen-quinones (a derivate of estrogen). Catechol estrogens have been linked to several types of cancer, including breast and prostate cancer, suggesting that the new molecules could be the link between schistosomiasis and bladder cancer.

The research now published follows these results looking at the effect of S. haematobium eggs (the parasite stage associated with the cancer development) on normal human bladder cells. For that Botelho and colleagues exposed the cells to extract from the eggs and found that treated cells, when compared with normal control cells, divided much more, died much less and showed signs of oxidative stress.

Uncontrolled cell division and resistance to die are hallmark characteristics of cancer,  and oxidative stress is known to be implicated in cancer formation.

To confirm that these changes were linked to cancer Botelho and colleagues next looked for DNA lesions. If DNA - the cell’s “instruction book” - becomes damaged and is not properly repaired, it will start giving wrong “instructions”, which can lead to the abnormal behavior typical of cancer (uncontrolled cell multiplication, “immortality”, etc.). And in fact, exposure to parasite’s eggs was linked to a visible increase in DNA lesions in the cells. The eggs were confirmed to contain the same new estrogenic molecules found in adult worms.

Based on the new data, Botelho and colleagues are now proposing a mechanism for the Schistosomiasis-bladder cancer connection.

As Botelho explains, ”What we think happens is that the parasite releases oestrogen molecules into the host. These are metabolized into catechol-oestrogen quinones, which are known to have high affinity for DNA and as result form estrogen-DNA  adducts that can lead to the  bladder cancer."

In fact, adducts , defined as pieces of DNA covalently bonded to a cancer-causing chemical, are known to interfere with normal cell division increasing the chance of DNA mutations and, consequently, of cancer. The carcinogenic effect of this estrogen–DNA adduct could then explain the link between S. haematobium infection and the carcinoma.

Botelho and colleague’s work have several implications – the possibility of using the new identified estrogenic molecules as biomarkers for bladder cancer in Schistosomiasis patients, or even as therapy targets for a start.

This is important because although at the moment it is suggested that there are about 4 cases of cancer for 100 000 Schistosomiasis-infected individuals what does not seem much,  but we must remember that 200 millions people are believed to be infected, and even those numbers, like the Egypt case suggests, are probably a gross underestimation. The reality is that carcinoma of the urinary bladder is the most common malignancy in the Middle East and parts of Africa where schistosomiasis is a major problem.

Not only that but, and despite the existence of a cheap and effective drug, the disease (which is asymptomatic until very late) seems to be increasing and spreading. This is probably due to the large numbers of economical migrants from developing countries, as well as the wars in these areas of the globe, that create large displacements of people.

Another interesting potential implication for Botelho’s results is the possibility that the new identified estrogenic molecules could have a role in other cancers associated with infection and estrogenic changes, such as cholangiocarcinoma, a liver cancer linked to an infection by a parasitic liver fluke.

A question remains though - why does the parasite produce estrogenic molecules? An option, according to the researchers, could be that uses them to reduce the density of the bladder wall (a known effect of reduced estrogen receptors). After all  S. haematobium eggs must cross the bladder mucosa to be excreted in order to survive and continue its life cycle. Another possibility is that the parasite is manipulating the host’s hormonal environment to improve its own living conditions.

Part of Botelho’s future work will be looking at the effect of the new estrogenic molecules on the parasite life cycle.