The history of Arctic and Antarctic exploration and discovery is filled with the names of heroes.  Many of those names get repeated over and over in popular writings on polar exploration.  Other names tend to get forgotten.  Here, in no particular order, I hope to write of some of these heroes, both remembered and forgotten.


Alfred_Wegener is most famous for his Theory of the Drift of the Continents.  He is less widely known for his enthusiastic contributions to climatology and meteorology, which led to his death on the Greenland ice sheet in 1930 under the most heroic circumstances.

In 1930 a large expedition was led by the German geologist Alfred Wegener to establish a base in the middle of the Greenland ice sheet.  In 1912 and 1913 Wegener had successfully wintered with a Danish expedition on the inland ice near the north-east coast of Greenland.  The American meteorologist Professor Hobbs had worked in Greenland, and had formulated theories to explain the formation of cyclones and the causes of weather-changes over the Atlantic and Northern Europe. To test these theories - especially the assumption of constant high air pressure - above the central ice masses of Greenland, Wegener proposed to erect a mid-ice station in conjunction with coastal stations on the same latitude in the east and west. 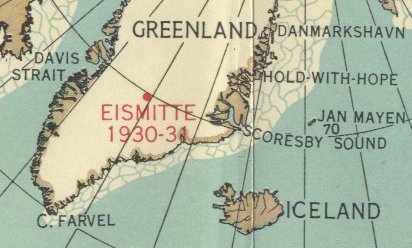 The chosen location for the mid-ice, or Eismitte station was on a part of the inland ice at a height of 10,000 feet.   As cold increases with altitude, so human endurance decreases.  In the winter, the extreme cold at such a location would likely be unsurvivable.  A shelter would fairly obviously be of primary concern, but the logistical problems of shipping building materials such a distance over the ice sheet were, in the 1930's, too great.  However, ice can be used as a building material and is a fairly good insulator, so the plan was made to build Eismitte as a sunken shelter below the ice. 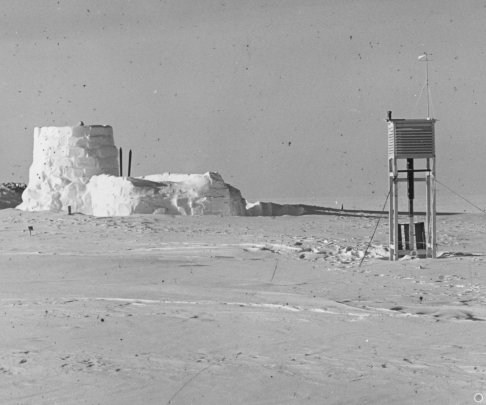 Resembling more a Roman fort than any igloo, the station comprised an excavated section and an observation platform.  From the observation platform, via a sheltering wall, an entrance and steps led down into the ice where a store-room and winter quarters were constructed. 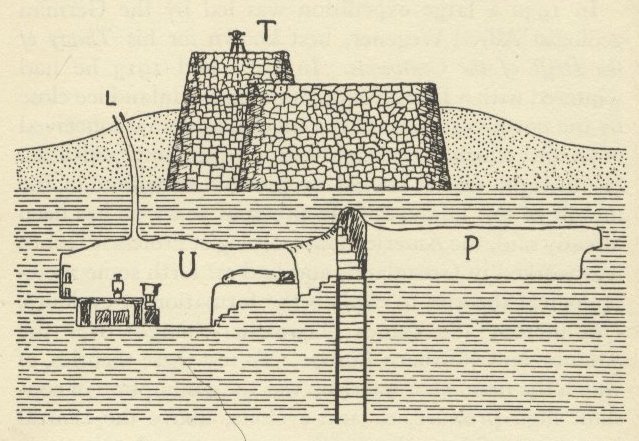 A diagram of Eismitte station.
T - theodolite for balloon observations.
P - provisions store.
U - underground accomodation for three men.
L - airshaft.
In the centre, a shaft leads deeper into the ice for scientific investigations.

The 3 part documentary linked below shows how difficult it was to transport men, supplies and equipment up to the plateau and across the ice. The propeller-sledges were intended to reduce the human work load, but had to be manhandled up to the ice sheet first.  The propeller-sledges were not much brought into use at first, dog teams being used more.  The first dog-sledge expedition into the interior carried only the most necessary equipment, so that meteorological observations might begin the sooner.  Other dog teams followed later with more provisions and equipment.  The trail was marked with black flags, and with posts every five kilometres.

Not enough equipment could be carried during the remainder of the year.  The boards intended for lining the ice-cave remained at the coast together with the radio transmitter.  Provisions were still not truly sufficient by the end of Arctic summer.  At that latitude the sun does not set between May 13 and July 30 each year, and does not rise between November 23 and January 20.  Only two months before Christmas, Wegener set out to supply provisions and fuel for keeping the scientists warm.  Although Eismitte was successfully re-provisioned it could support only three men.  The attempt to return to West Camp cost Alfred Wegener and his companion Rasmus Villemsun their lives. Wegener was found later in a grave which Villemsun had dug in the ice, but Rasmus Villemsun was never found. 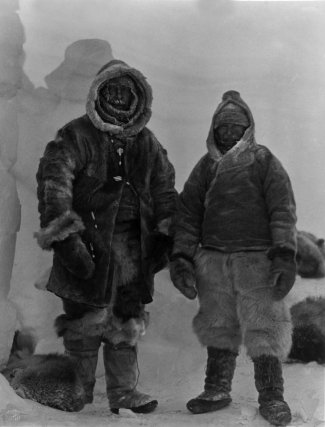 The three men at Eismitte, by rationing the provisions, made them last until the arrival of relief parties. Fuel was so scarce that the party had to spend most of the time in their sleeping bags. Fritz Loewe had his feet frost-bitten, and in the course of the winter his companions had to remove his toes, one after the other, without dressings and without anaesthetics, their only instrument being a pair of scissors.

On May 7th, after the return of the sun, they were relieved by the two propeller-sledges. These brought the desperately-needed stores, and took the sick Dr. Loewe and Dr. Sorge back to the coast with them. But Johannes Georgi chose to remain behind to make observations during the expeditions final months. He spent the summer alone - of such stuff are heroes made.

The expedition was by no means a failure.   Careful observation and measurement validated the use of ice cores as precipitation - and hence climate - proxies.  The thickness of the ice was measured using a combination of charges of dynamite and seismographs.  It had been debated whether the ice was a cap on mountains or a sheet filling a valley.  The expedition demonstrated conclusively that the Greenland ice sheet sits in a depression of its own making, the earth's crust being pressed down by the overbearing weight of so much ice.

The two propeller-driven sledges were abandoned at the edge of the ice sheet when the expedition returned home.  They have since been recovered and placed in a museum - see link below.

The three images below link to the three parts of the movie.  You can right-click the movie player to view full screen. 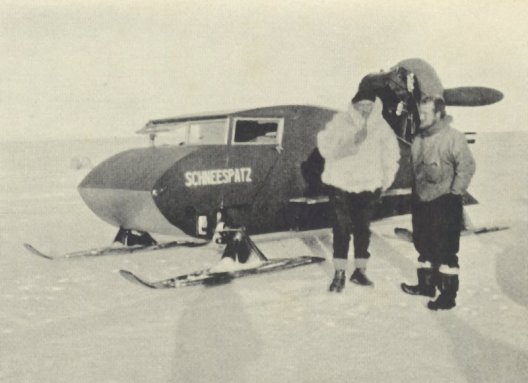