In a recent article - Arctic Ice May 2010 - I predicted that Arctic sea ice would be lower by the end of the month than at the same time in 2007.  The extent as shown by the NSIDC is now touching the 2007 extent line on the graph. 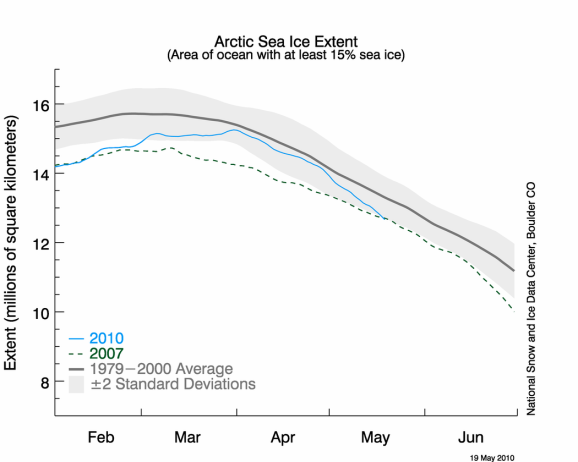 Arctic sea ice is on track to recede to a record low this year, suggesting that northern waters free of summer ice are coming faster than anyone thought.

The latest satellite information shows ice coverage is equal to what it was in 2007, the lowest year on record, and is declining faster than it did that year.

“Could we break another record this year? I think it's quite possible,” said Mark Serreze of the National Snow and Ice Data Center in Boulder, Colo.

“We are going to lose the summer sea-ice cover. We can't go back.”
http://www.theglobeandmail.com/news/national/arctic-sea-ice-heading-for-...

The loss of ice year on year is definitely anomalous.  Historical records show that it was never possible to take a ship through the Arctic from the Atlantic to the Pacific prior to the 20th century.  Until 1932 no ship had made the journey without spending at least one winter locked in the ice.

The first single season journey through the Arctic was performed by the steam icebreaker Sibiryakov between June and October 1932, from Arkhangelsk through the Bering Strait.  The journey was completed in stages, and with some difficulties, as reported in this article.

The first single season voyage through the North West Passage was performed by the RCMP vessel St Roch in 1944.


There are multiple feedbacks at work in the Arctic.  Loss of albedo is a positive feedback.  When ice breaks it releases heat - a positive feedback in summer.  Broken ice has a lower albedo than continuous ice.  The rate at which ice can be dispersed by winds and currents is increased with lower particle mass.  The ability of broken ice to bypass obstacles such as shoals and islands is increased with lower mass.  The total area in contact with water is increased with each increase of fragmentation, so if the water is warm enough the melt rate increases.

Another feedback mechanism arises as the winter/summer ice imbalance grows.  If ice lost in summer is not all replaced in winter then the 'workload' for the next summer tends to start off lower.  Given the same summer and winter temperatures year on year the ice would be expected to melt more year on year.  As each year the heat available melts less ice it warms the water more.  That heat store has the effect of extending the melt season - another positive feedback.  However, if temperatures are rising each year then the feedbacks are amplified.

Warmer than normal temperatures have become the norm in the Arctic:
There have been only three months in the past decade when average temperatures were cooler than seasonal norms from latitude 60 N (about even with Helsinki and the southern tip of Greenland) to the North Pole.
April 2010 Global Temperature Report

Vanishing Arctic ice should be a cause of concern.  We should not expect one of the planet's major drivers of climate to vanish without having any effects.  What those effects might be is still not known.
The Chatter Box
More Articles All Articles
About