The NSIDC has just issued an update report for August -

The end of summer is approaching in the Arctic; temperatures are dropping and melt is ending in the high latitudes. Yet summer is not quite over in the lower latitudes of the Arctic Ocean, where sea ice extent continues to decline. Sea ice has melted out extensively in the northern route of the Northwest Passage, but the passage is not completely open.

Meanwhile, in the Antarctic, sea ice extent continues to be well above normal, largely because of atmospheric circulation patterns set up by a high Antarctic Oscillation mode.

The anti-science brigade has been howling over the 'cover up' of the 'nice recovery' in the Antarctic.  It's good to see the NSIDC give Antarctic sea ice extent a passing nod so that the unscientists have one less spurious argument to hype up.

As of August 16, only 2007 and 2008 had lower extent. Approximately one month remains in the melt season.

High pressure has moved in over the central Arctic Ocean, replacing stormier, lower-pressure conditions that persisted during July. Paired with lower pressure on the Siberian side, this pattern generates winds that push the ice northward and reduce the total ice extent, especially since much of the ice pack is spread out.

If the ice extent is X% on average, then ideal conditions could press it into a smaller sea area which is only X% of the prior sea area.  For each square kilometer of ice at X% you get only X% of a square kilometer of compacted ice cover.  If floes over-ride each other, as in strong winds then you get even less cover.  If the very winds that are causing compaction cause ice to stream into warmer waters via Nares Strait and other open channels then the measure of ice extent will drop more.

Currently, ice is streaming through Nares Strait from Lincoln Sea, as shown in this image of part of Nares Strait. 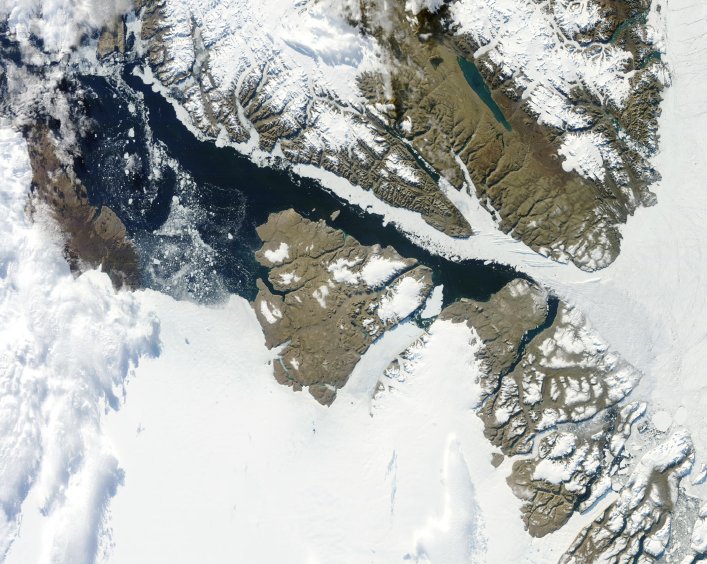 The main pack is now so highly fragmented and has so much open water that - I suggest - the area of the Arctic now covered with ice to 15% concentration or more could compact under such conditions to about 3 million square kilometers as this years annual minimum.

However, I stand by my previous forecasts of between 3.5 and 3.8 million km2. 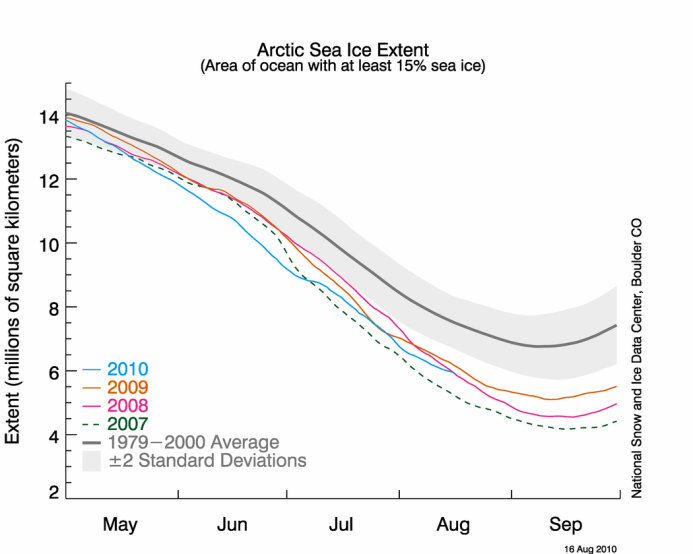 
The next image is from the August 16 2010 terra Arctic mosaic.  It shows the region near the NWP, the entrance to which is bottom left.  My point about how spread out the ice is - and how small an area it might cover if it becomes compacted - should be clear. 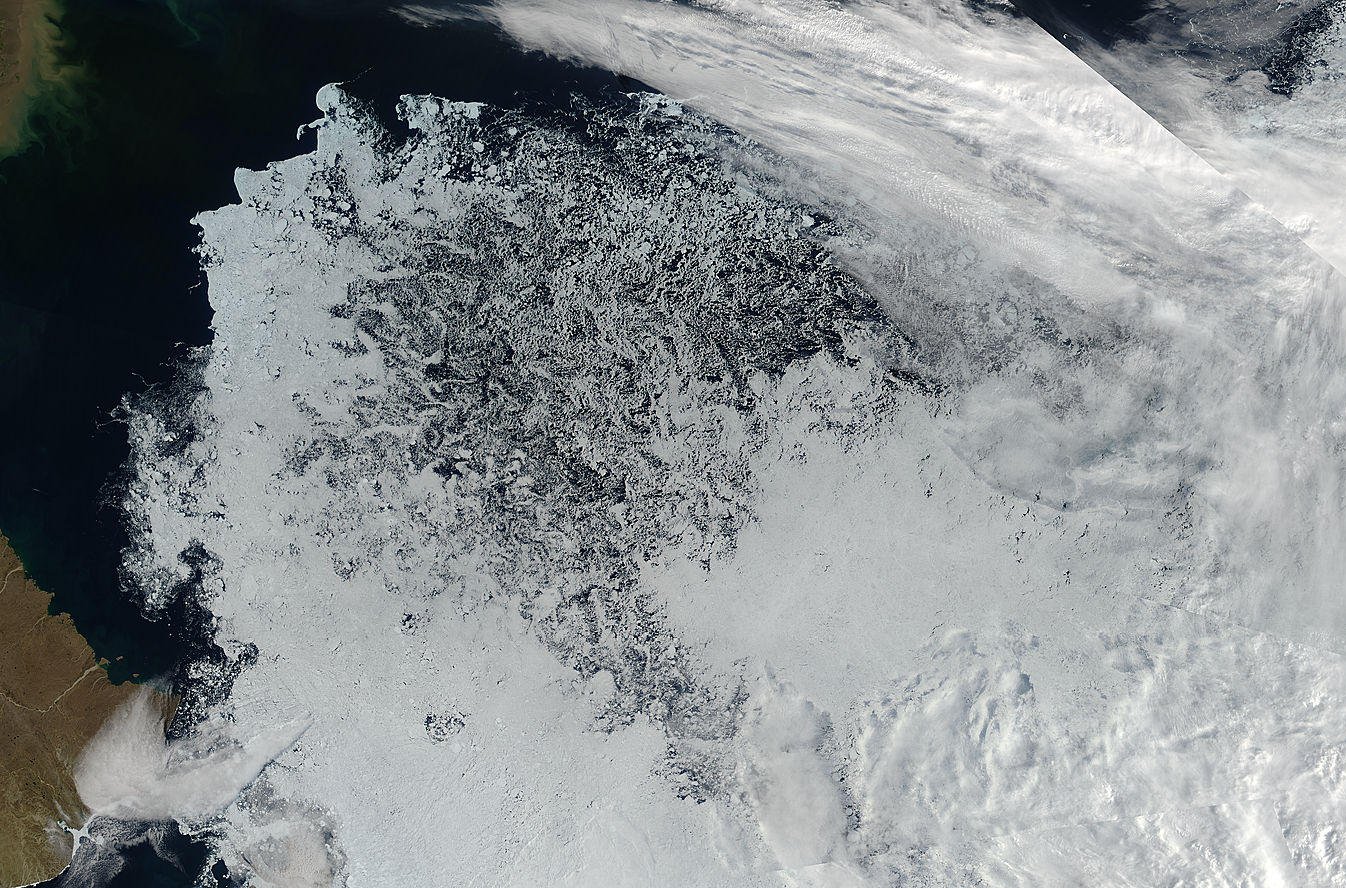 Ice spread out near NWP.
image source:
http://rapidfire.sci.gsfc.nasa.gov/subsets/?mosaic=Arctic.2010228.aqua.1km
Note: most of the remaining ice is less obviously spread out.  Please check the source.

Early clearing in the Northwest Passage


Stephen Howell, Tom Agnew, and Trudy Wohlleben from Environment Canada report that sea ice conditions in the Northwest Passage are very light. Ice is still present at the mouth of the M’Clure Strait, in central Viscount-Melville Sound, and in Larsen Sound, as of early August. As a result, neither the northern route (Western Parry Channel) nor the southern route (Amundsen’s Passage) through the Northwest Passage are completely clear of ice. Sea ice area within the northern route is currently well below the 1968 to 2000 average and almost a month ahead of the clearing that was observed in 2007, according to ice chart data from the Canadian Ice Service. In the southern route, there is still a substantial amount of ice.

This year’s early clearing of sea ice probably resulted from record warm temperatures this past spring over the Western Canadian Arctic, as well as the decline in older, multiyear ice in the channel over recent years. Spring 2010 was the warmest in the region since 1948: some regions of the Western Canadian Arctic were more than 6°C (11°F) above normal. These warm conditions helped break the ice up early in the northern route. If winds push sea ice away from the entrance to M’Clure Strait, the northern route of the Northwest Passage could open completely this year. However, even scattered sea ice remains a significant threat to navigation. 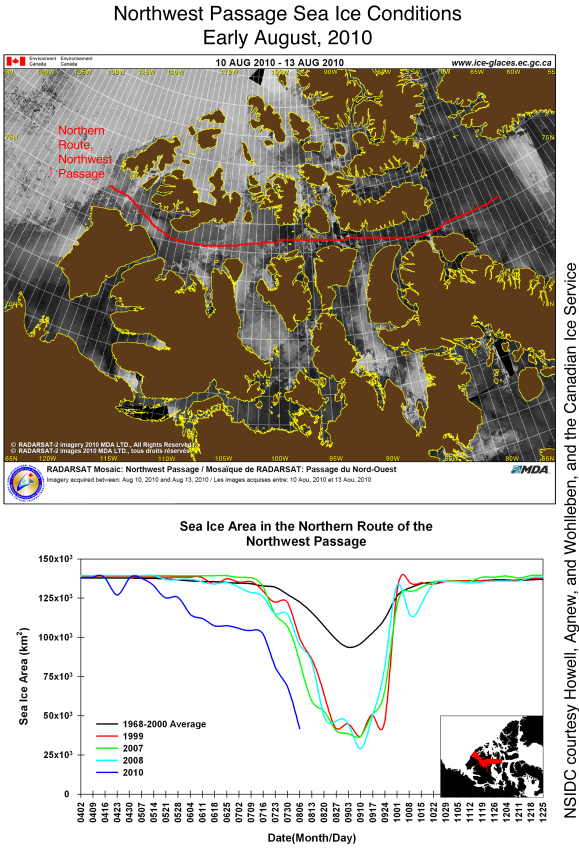 The graph speaks for itself. 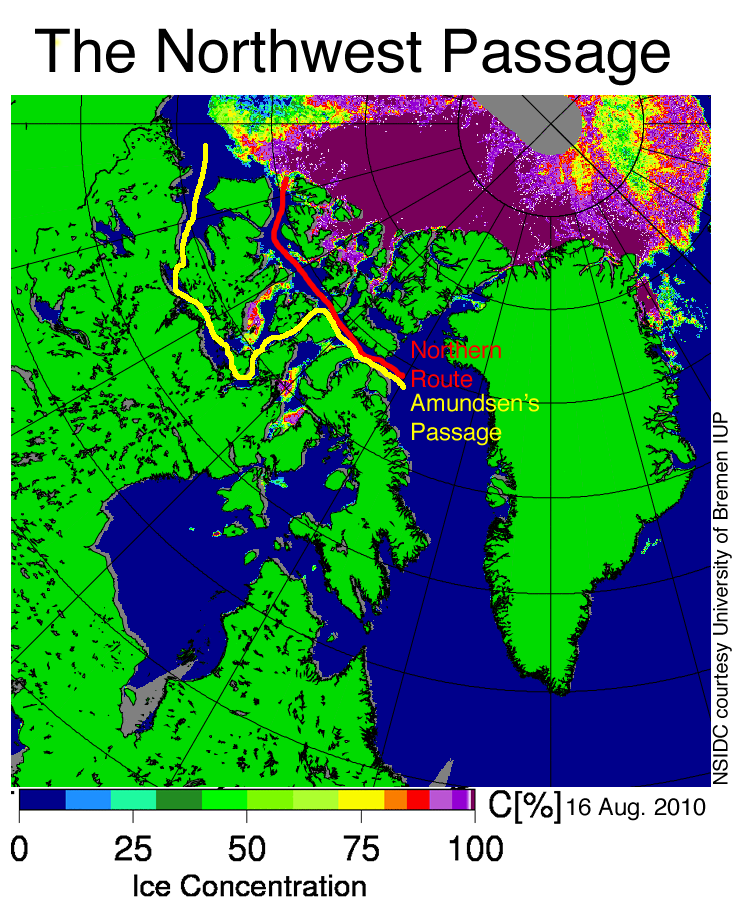 History of the Northwest Passage

Last month, Canadian investigators located the wreckage of the HMS Investigator, which sank on an expedition led by Captain Robert McClure in the 1850s. The McClure expedition had set out to rescue the Franklin Expedition, which had gone missing after leaving Baffin Bay for the Northwest Passage in 1845. McClure attempted to enter the passage from the west through what is now called M’Clure Strait, but quickly became trapped in the ice. They remained trapped through two winters before being rescued by another ship. The Franklin Expedition was not so fortunate: all 128 men perished. It was another fifty years before Norwegian Roald Amundsen and a small crew successfully navigated the passage. Their trek, by the southern route, took over two years.

Regular readers may remember my various articles on this topic, such as
Arctic Heroes #3 - Robert McClure and, in response to a slur on the reputation of Robert McClure:
Spitting On Graves.

For the full report and full size images, please go to the NSIDC site:
http://nsidc.org/arcticseaicenews/2010/081710.html

Thorleif Thorleifsson and Børge Ousland in their trimaran 'Northern Passage' are making their way through the ice in the Laptev Sea region.  This was the area most likely to give them trouble.  Once through the relatively small region of extensive ice they have waters ahead that should afford them a relatively easy passage.

From an earlier part of their journey, this photo captures the ground-level view of some interesting floes. 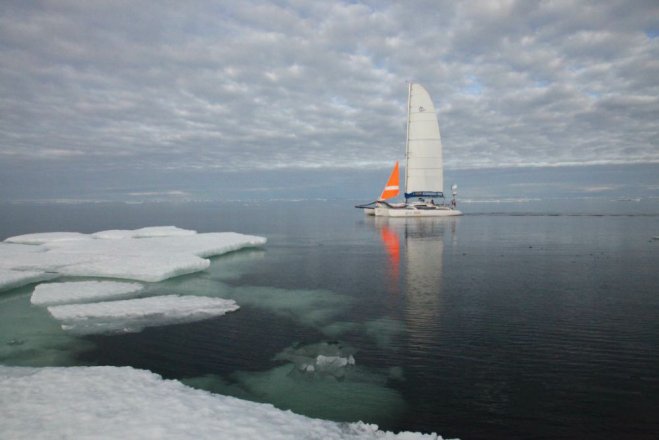 Note the ice pressed under the water by the weight of other floes.  This swamped ice is known as negative freeboard ice.  When covered in fresh ice to make a sort of 'ice sandwich', this can appear to satellites as thick ice.

The trimaran appears to be passing through thin ice.  Between the camera and trimaran the sea appears to be covered in ice of varying kinds.  Judging by the 'flat' ripples I would say that what looks at first sight to be open water near the camera is covered in frazil ice.

The latest available clear image shows that the ice island is grinding its way forward between the fjord walls.  Currently it is clear of the stream of floes from Lincoln Sea.  If it is subjected to impacts it will fragment.  If it remains whole until the sea starts to freeze it will form a substantial anchor for local sea ice. 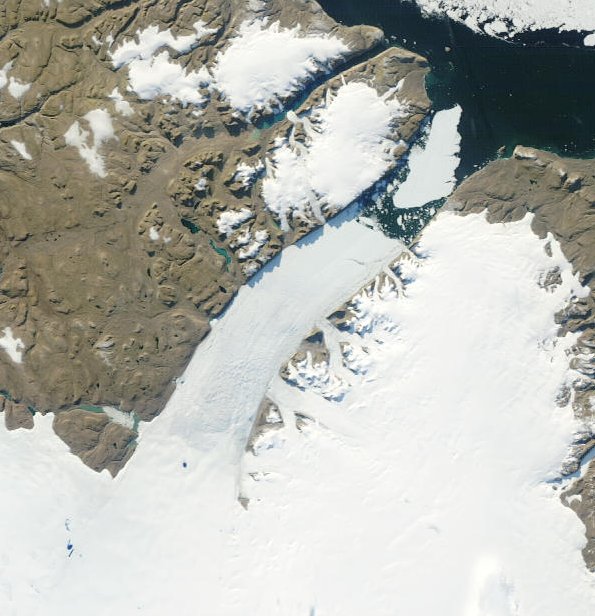 Note the bergs from the ice island and from the new calving front.

I hope to keep pace with any new developments in the Arctic and post further updates.

Thank you for visiting.
The Chatter Box
More Articles All Articles
About