Well, of course, that should be 'we were robbed', according to the rules of conventional grammar.  But the phrase 'we was robbed', often written as 'we wuz robbed' has become part of the lexicon of humor in the English language.

There are many kinds of robbery.  I suppose that George III might have said 'we wuz robbed' in reference to the Treaty of Paris 1783.  It must have been hard on the poor guy to lose so many colonies over so little tax1.

Robbery and stealing are pretty similar in meaning, but many expressions in English just wouldn't work with the wrong choice of word.  You can rob someone blind or steal them blind, but you can't rob a march.  You can steal a march, which means 'get an advantage', especially in terms of being ahead of the game.  The game, of course, is baseball, the object of which is not to rob, but to steal a base.  In baseball statistics, a stolen base is denoted by the abbreviation SB, which stands for SonovaBeech!

The Americans only managed to establish democracy by stealing a march on the British armies at every turn and then stealing their bases.  SB!

Democracy is a form of self-flagellation in which we, the people, get to choose once in a while who is going to have the privilege of robbing us blind through taxes for the next four years or so.

Taxes are daylight robbery.  Some people think that the term 'daylight robbery' refers to the window tax which George III used to raise money to send people not otherwise employed to meet their neighbours in the colonies for a friendly game of 'where shall we surrender next?'

In fact, daylight robbery is a natural antonym for burglary.  In common law, and in the US Uniform Code of Military Justice2, entering a house by night with intent to steal is burglary.

Daylight robbery should not be confused with highway robbery.  Cops are not supposed to enter your house during the hours of daylight, and especially not at night, in order to fine you for going too fast.  On the highway, however, anyone caught speeding gets fined.  In the US people get a citation for speeding.  In the UK we only get citations for bravery.  Doing 100mph in a pedestrian precinct is not considered to be an act of bravery except as a gag3 on a Hollywood set.

Most people are agreed that motoring fines are highway robbery.  Highway robbery was traditionally done by people on horses.   They were called highwaymen.  In the modern era, people on harley davidsons frequently fine people for speeding, thus keeping up the noble traditions established by the likes of Dick_Turpin, but a lot faster. 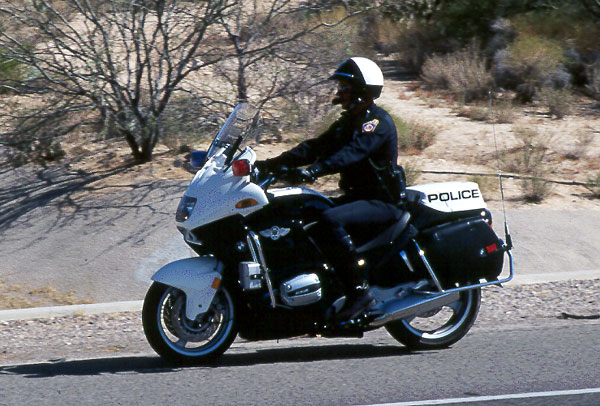 [1] - the meagre taxes raised from stamp, tea and window taxes were out of all proportion to the British national debt caused by the war.
[2] - UCMJ929.129 “Any person subject to this chapter who, with intent to commit an offense punishable under sections 918- 928 of this title, breaks and enters, in the nighttime, the dwelling house of another, is guilty of burglary and shall be punished as a court-martial may direct.”
http://www.constitution.org/mil/ucmj19970615.htm
[3] - gag = professionally performed movie stunt - this sort of thing >