In 1912 there were 1,019 icebergs reported in the North Atlantic shipping lane throughout the iceberg season.  Many of those icebergs were reported in April 1912.

This year, as of June 06 2010, no icebergs have been reported in that same shipping lane.

Is this evidence of global warming?

It doesn't work that way: there is only an indirect link between sea ice loss and iceberg melt mechanisms. 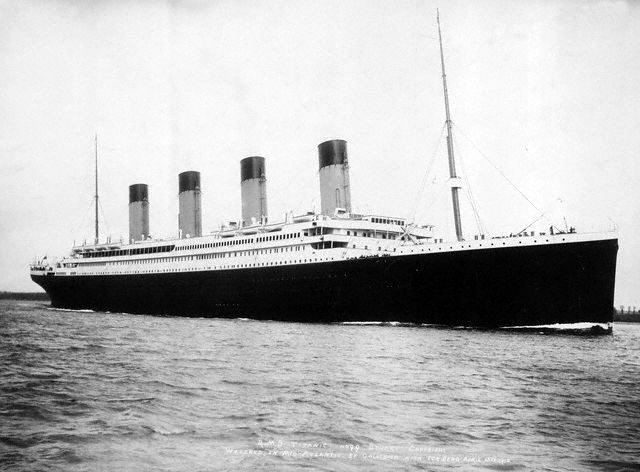 
The history of iceberg watching

What is wrong with the following sentence?

"In 1912 a ship was damaged by collision with an iceberg."

I think that most people would find fault with the word 'damage'.  The Titanic wasn't just damaged, she was sunk.  But the real fault in the sentence is the use of the indefinite article 'a'.

In 1912, RMS Titanic was not the only ship to hit an iceberg and suffer damage.  The following ships all suffered damage in the same shipping area following encounters with icebergs.

Credit to Thomas E. Golembiewski of titanichistoricalsociety.net/forum for that information.


Prior to the establishment of the International Ice Patrol in 1912 there was only an informal reporting of ice between ships.  Not all ships had radio.  Of those that did, not all kept 24 hour radio watch.  The Titanic's radio room was not a ship's service, but primarily a passenger facility for the sending of private messages by telegram. 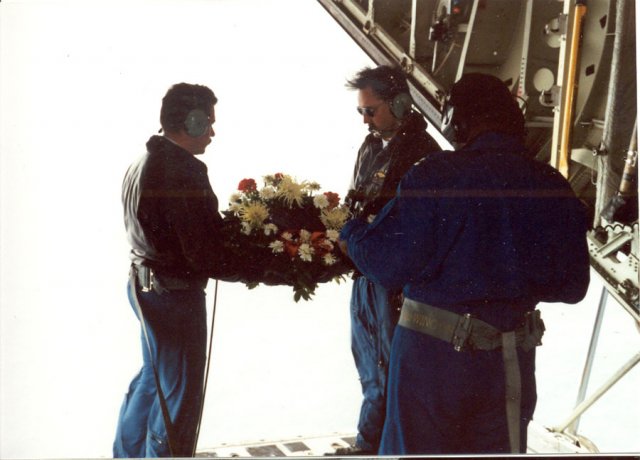 
The history of an iceberg

Year on year, snow falls on the Greenland ice cap.  Over the course of many thousands of years, many feet of snow are compressed into mere millimeters of ice.  Under huge pressures of the weight of ice a few kilometers thick, the ice flows from a high central mound to the ice edge.  Eventually, ice thousands of years old is calved into the sea around Greenland.

Despite prevailing Northerly winds, the new iceberg doesn't head off South.  It may have to first make its way to the open sea via a fjord.  There may be islands in the fjord or its outlet.  At any time the iceberg may becomes stranded ashore or on a bar of rock debris.  In winter, the berg will be iced in and immobile.  It may take a year or more for our iceberg to emerge into open waters. 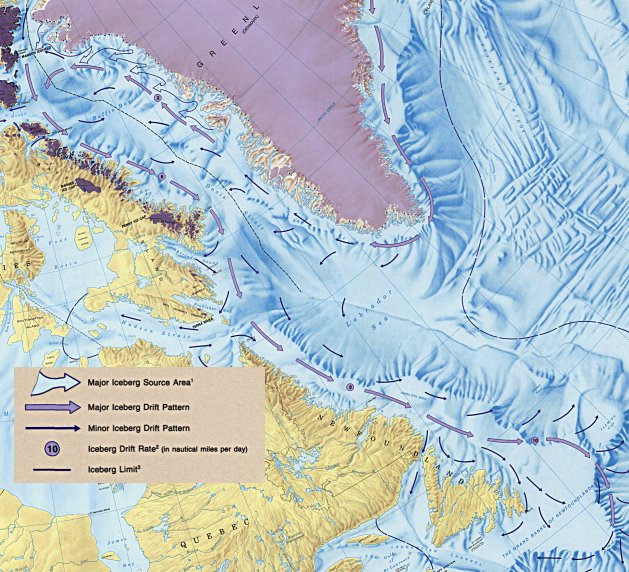 
Icebergs are much more affected by currents than winds.  Nine tenths of an iceberg is immersed in water, a much denser medium than air, so it is hardly surprising that iceberg drift should be dominated by currents.

One of the most prolific sources of icebergs is Sermeq Kujalleq, the Jakobshavn glacier, which produces about 10% of all icebergs originating in the Greenland ice sheet. 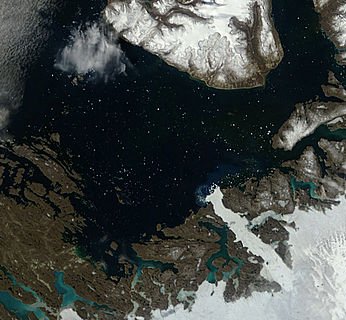 The small dots in the image above, at a resolution of 500m per pixel, are actually huge icebergs of the type seen in the next image. 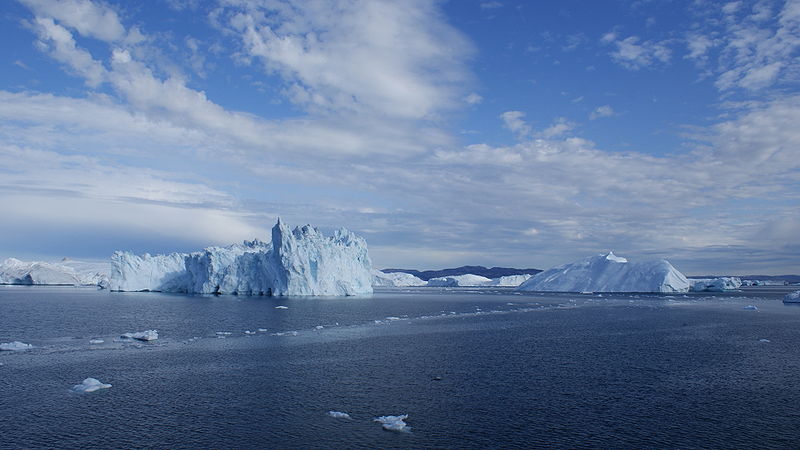 
Our iceberg, from whichever part of Greenland's coast, will journey in the currents.  Every time it enters shallow waters it is at risk of stranding on a falling tide.  If neaped - stranded on an exceptionally high tide - it may remain stranded for a month or more.  The journey along Greenland's coasts is very slow.  Where the current loops back in Baffin Bay, our iceberg is carried towards the West.

Our iceberg will now encounter any one of three conditions: little or no sea ice, loose pack or dense pack.  If there is no ice barrier our iceberg will be carried down the coast and subjected to more stranding risks.  If there is loose pack then the iceberg, being deeper than the pack, will feel the effects of current more than the pack.  It will be the bully in the crowd, trying to force a way through.  But this will serve to compact the loose ice ahead of the iceberg and thus slow its progress South.

The greatest melt of an iceberg is due to erosion by waves and immersion.  By comparison, melting from direct solar heating or wind is much lower.  This means that every time an iceberg is stranded on a falling tide its area of water contact is reduced, hence its melt rate.  An iceberg surrounded by solid sea ice has its immersed area reduced by the area contacted by the surrounding pack.  The pack absorbs some of the heat from the water.  All in all, a stranded iceberg or an iceberg trapped in the pack is going to melt a lot slower than if it continued to follow the current freely.

If the pack ice is fairly compacted, our iceberg will tend to remain in open water as it bounces along the edge of thick, compact ice.  In such conditions a large iceberg may easily survive melting long enough to end up in the Labrador current.

In summary, for an iceberg to end up as a hazard to shipping in the North Atlantic great circle route, it must get to the Grand Banks area faster than its own specific melt rate.

The next image is the most recent iceberg chart from the Canadian Ice Service.

Iceberg analysis chart, reduced by me to 30% of original.


Any iceberg which survices long enough to drift south of the limit shown in magenta will be picked up by the USCG International Ice Patrol.  As soon as ice conditions warrant it, the IIP issues daily bulletins.  As of the date of writing, June 06 2010 no such bulletins have been issued.

Historical accounts, modern eyewitness evidence, scientific articles and scientific papers all point to the great length of time taken by any average iceberg to find its way down to the Grand Banks area - often many years.

During the whole of its journey an iceberg is subjected to at least some melting from contact with warm currents or water warmed by the summer sun.

There seem to be  two factors most likely to accelerate an iceberg's journey South:

1) loose pack in Baffin Bay driven South as a body by wind and current;

2) dense pack in Baffin Bay into which the berg cannot penetrate.

A berg which cannot penetrate the Baffin Bay pack cannot get close enough inshore to be stranded.  Accordingly, it will continue to be driven South by the current.

It seems that pack ice fragmentation and pack ice compaction cannot both be caused by global warming.

There is no clear trend in Grand Banks iceberg counts.


There is no clear link between Grand Banks iceberg counts and global warming.

It seemingly follows that neither annual nor decadal variations in iceberg counts can be attributed to global warming.
The Chatter Box
More Articles All Articles
About