Climate has always changed - but we have not always known it.

Events following 1816 - the year without a summer - led to a major controversy in which the scientific consensus on the one hand was countered by dogma on the other.  On reading the history of that great controversy, one gets a strong sense of Déjà vu.

The scientific consensus that our planet's climate has always undergone change, arose from researches which began following a meeting of the Schweizerische Naturforschende Gesellschaft - the Swiss Natural Science Society - in Zürich, October 6, 1817.  At that meeting it was decided to offer prizes for research which would advance the field of natural history, which addressed the then recent climate phenomena, and which would promote the scientific standing of Switzerland.

The first 'request for papers' asked: "Is it true that the high Swiss Alps for a number of years have been really rougher and colder?".  The time allowed for research was two summers.  The first prize winner was Karl Kasthofer, a man with a wealth of experience in forestry.  In brief, he asserted that there was no proof that the ongoing climate change in the Alps would be lasting or permanent.

The second question was: "Über die Veränderungen der Temperatur in den Schweizer Alpen" - a request for papers "about the temperature variation in the Swiss Alps".  Only one paper was submitted within the 'two summer' deadline and it was awarded the prize: 300 francs.  To put that sum of money into perspective: the winner had at that time an annual salary as an engineer of 1200 francs.

Modern climate science - most especially as it deals with climate change - can thus trace its foundations to Ignaz Venetz who in 1821 won the prize for his essay - Memoire sur les variations de la température dans les Alpes de la Suisse. 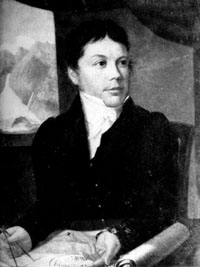 Source of image and information: University of Berne

This series of three articles presents some information about Ignatz Venetz, together with his original paper in French, and my English translation of it.

In this first article of the series, I present evidence to show that Venetz was indeed the first person to formulate the scientific hypothesis that our planet has seen periods of climate change which caused changes in glaciation, a hypothesis which Venetz supported by means of a great amount of coherent and credible scientific evidence.

I have been researching the achievements and publications of those scientists like Venetz who laid the foundations of modern geology, glaciology and climate science, because -

It appeared to me that it might be useful to recount the story of a few of the great pioneers during the momentous period which I wished to select, and to show, from their struggles, their failures, and their successes, how geological ideas and theories arose, and were step by step worked out into the forms which they now wear.

For many centuries, science - as natural philosophy - was dominated by a real need to avoid conflict with established religion - often a state religion.  The dogmatic view was that our planet had been created by a deity to suit our needs and that - the time of the Noachian flood excepted - there had been no significant, long-lasting changes in climate.

The industrial era operations of mining, and the earthworks needed for the construction of canals and railways, produced ever-increasing amounts of information about the planet's rocks and their strata - and fossils.  At one time the term 'fossil' meant - in its literal Latin sense - something dug up out of the ground.  What we now term pseudofossils merely resemble fossilised remains of living things, but it was once argued in all seriousness that all - or most - seemingly petrified specimens were merely pseudofossils.

When it was shown that such a great variety of highly detailed fossils as had been cataloged could not all be pseudofossils, the counter-argument to science was that these fossils were merely evidence of the Noachian flood.  The idea of one or more catastrophic floods so dominated the thinking of most natural philosophers that some form of inundation was seen as the most likely cause for many geological phenomena.

"for the removing of large masses of rock the most powerful engines without doubt which nature employs are the glaciers, those lakes or rivers of ice which are formed in the highest valleys of the Alps, and other mountains of the first order. . . . Before the valleys were cut out in the form they now are, and when the mountains were still more elevated, huge fragments of rock may have been carried to a great distance ; and it is not wonderful if these same masses, greatly diminished in size, and reduced to gravel or sand, have reached the shores or even the bottom of the ocean."   Here the conception of the former greater extension of the glaciers was fore-shadowed as a possible or even probable event in geological history. Yet for half a century or more after Playfair's time, men were still speculating on the probability of the transport of the erratics by floating icebergs during a submergence of Central Europe under the sea, — an hypothesis for which there was not a particle of evidence. No geologist now questions the truth of Playfair's suggestion,

Such was the first explanation proposed for erratics - giant boulders whose mineral structure did not match the local rocks.   But "no geologist now questions the truth of Playfair's suggestion," and it has come to be accepted since Venetz that erratics provide strong proof of glacial advances and retreats - of ice ages.

In science, as in all other departments of inquiry, no thorough grasp of a subject can be gained, unless the history of its development is clearly appreciated.

The first scientific paper on the evidence for multiple past changes in climate as causes of glacial advance and retreat was written by Ignatz Venetz in 1821.  Although that paper was not published until 1833, it was awarded a prize in 1821 and there is evidence to show that its contents must have been known to many natural philosophers of those times, some of whom have since been widely and wrongly credited with being the first to formulate such a scientific  hypothesis.

... at this moment, distinguished men, like Professor Favre of Geneva, are determining from the distribution of the erratic blocks the extent of the ancient glaciers of Switzerland.  It was, however, an engineer named Venetz that first brought these evidences to light, and announced to an incredulous world the vast extension of the ancient ice.  M. Agassiz afterwards developed and wonderfully expanded the discovery.

John Tyndall,
The Forms of Water
in clouds and rivers, ice and glaciers
1874
(taken verbatim from the 10th edn. 1889)
my emphasis

In his library, Louis Agassiz had a copy of Denkschriften der allgemeinen Schweizerischen Gesellschaft für die gesammten Naturwissenschaftenst - Proceedings of the general Swiss Society for all sciences- in which was published - in 1833 - the Memoire of Venetz. 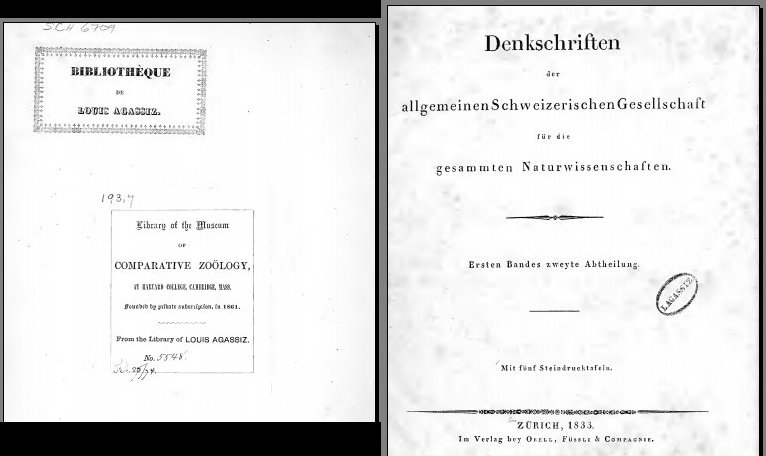 From the Library of Louis Agassiz

It is certain that Louis Agassiz was aware of the prize-winning paper by Venetz.   Although often credited as the originator of ice age theory, Agassiz was in fact its major promoter.

Jean de Charpentier is also often credited with originating the theory.  This is not so.  At the time when Venetz was researching and writing his theory, de Charpentier was only just beginning to study the subject in any great depth.

As a final piece of evidence I submit the fact that Venetz  was the engineer to the Valois canton.  It was his duty to investigate the glaciers to determine if they posed any danger to the communities of Valois.  Following the 'year without a summer' - 1816 - an ice dam formed in Bagnes valley.  Attempts to drain the water failed and there was a disastrous flood in 1818.  That location appears in the image on the wall behind Venetz in the portrait shown above.  Beyond doubt he was a specialist in glaciers before the Schweizerische Naturforschende Gesellschaft offered the prize which he won - and he was certainly well placed to investigate the matter.  As the engineer for the canton he would also have known other engineers such as de Charpentier, one-time director of the Bex salt mines.  Those mines consumed timber in great quantities for boiling and refining the salt - a cause of local deforestation - and demonstrate a probable cause for the exchange of ideas between Venetz, de Charpentier and Kasthofer.

The prize-winning paper was published in 1833 in the Denkschriften der allgemeinen Schweizerischen Gesellschaft für die gesammten Naturwissenschaftenst - Proceedings of the general Swiss Society for all sciences, 1833, a copy of which can be obtained from archive.org.


My English translation is now available as Ignaz Venetz - Climate Change Pioneer - #3.
As far as I am aware, this paper has never before been translated into any language, so this is a first for science20.com
The Chatter Box
More Articles All Articles
About