My  three part article on Venetz's prize-winning 1821 paper began with some facts tending to prove that he was the first person to discuss climate change scientifically.  Since beginning my researches concerning Venetz, I have discovered many more facts.


The discovery of climate change.

Spencer Weart's most excellent book and website on 'The Discovery of Global Warming' begins with the discovery that CO2 is a greenhouse gas.  I have for some time now taken that point in science history and worked backwards in my researches to determine the moment in history when the first major discoveries about climate change were made.

The greatest and most widely known effect of climate change is probably glaciation.  Even the most ardent skeptics accept the fact of ice ages.  Indeed, many of them refer to ice ages in their attempts to discredit modern climate science.

Ice ages constitute the most striking climate change evidence which is accepted by a vast majority of both scientists and the public at large.  My purpose in studying the topic was to determine just when the discoverers of ice ages figured out that an ice age was evidence of climate change.

From my researches I found that most people credit Louis Agassiz with the theory of ice ages and with the the theory that they were triggered by climate change.

Louis Agassiz read, to the Swiss Natural Sciences Society, in 1837, a paper on glaciation.  A paper on the same topic was also read by Karl Friedrich Schimper, who had stayed with de Charpentier and Agassiz in 1836.  In his 1837 paper, Schimper used the term 'eiszeit' and thus coined the term 'ice age'.

Thus we see that when Agassiz and Schimper read their papers to the society in 1837 they were building on foundations laid by Ignaz Venetz and published in 1821.  His researches showed that:

there had been multiple glacier advances and retreats in Switzerland;

these had been caused by multiple changes in climate;

these changes in glaciation and climate were likely to be found in other countries.

Jean de Charpentier died in 1855.  Ignaz Venetz died in 1859.  Louis Aggasiz, during his wide travels and lectures on glaciers seems to have quite forgotten on many occasions to mention the names of the two people who had first introduced him to the subject.

Only rarely has a writer or scientist correctly cited Venetz as having published in 1821, most giving instead the date of the reprint - 1833.

The transport of erratic blocks in the Alps had long been attributed by mountain residents to earlier glacial advances. The first scientific discussion of the matter came from Venetz. In 1821 that excellent observer showed that the glaciers of Valais during the last centuries have been generally less extended than today, whereas these same, during an earlier period, must have been much more greatly advanced than now.
Albrecht Fenck, 1881
Die Vergletscherung Der Deutschen Alpen: Ihre Ursachen, Periodische Wiederkehr Und Ihr Einfluss Auf Die Bodengestaltung 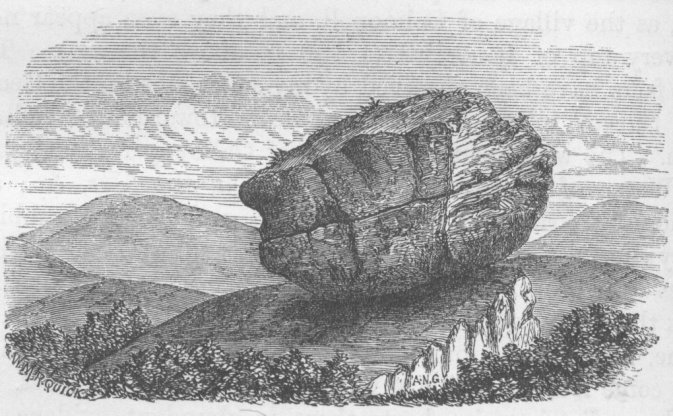 An illustration of a perched block, from The Great Ice Age, James Gieke, 2nd. ed. 1877


I hope to publish soon my transcriptions and translations of the 1837 papers of Agassiz and Schimper.  But first, I am pleased to publish Venetz's posthumous paper, here in part 2 of this current article.