The world is warming, but the Arctic is warming fastest.  The Arctic of today is not the Arctic which 18th or 19th century explorers knew.  Where ships were once likely to be crushed in heavy ice there is now often no ice in summer.  Where ice shove once built natural sea walls we find coastal erosion as waves are now free to erode melting permafrost.  New islands are being discovered, even as older islands erode away into sandbanks.

The transformation of a peninsula into an island can be observed nowadays on the Bykovskii Peninsula (Fig. 6).  Active thermal erosion is destroying the neck connecting this peninsula with the continent.  It can be assumed that, during the Holocene, the shelf zone near the coast was complicated by numerous islands and peninsulas composed of the IC sediments. The width of this zone was rather large, and it bordered the strongly dissected coastline.  At present we can observe the final stage of the degradation of the coastal IC.  For instance, from the 1930s to the 1950s, the Vasil'evskii and Semenovskii islands were completely destroyed and turned into sandy shoals.

As ice and permafrost melt, scientists make new discoveries.  It has just been announced in the Russian media that scientists have found a female mammoth with blood in a liquid state.  Scientists say they have found mammoth blood during the excavation of a grown female animal on the Lyakhovsky Islands, the southernmost group of the New Siberian Islands.

The dark blood was found in ice cavities below the belly of the animal. When researchers broke the cavities with a poll pick, the blood came flowing out. The fact surprised them because the temperature was 10C below zero.

"It can be assumed that the blood of mammoths had some cryo-protective properties,” said Semyon Grigoriev, head of the Museum of Mammoths of the Institute of Applied Ecology of the North at the North Eastern Federal University as cited by Interfax news agency.

Scientists have grown a 400 year old moss from under a glacier.  This shows that the glacier must have advanced 400 years ago in order to cover the moss.  It is retreating now.

The Teardrop Glacier, located on Ellesmere Island just west of Greenland, has shrunk at an accelerated rate since 2004. In 2007 and 2009, the University of Alberta team both set stakes to measure the Teardrop's shrinkage and collected plant pieces from its retreating edge.

The researchers took the plants back to Alberta, ground up the stems and leaves they collected, and sowed the material in a few different growth media, including some potting soil like you'd buy at the hardware store. They spritzed their charges with autoclave-sterilized water every few days for a year. Thirty percent of their petri dishes grew new plant material that they were sure weren't newer contaminants, they wrote. The regrown plants included four different species.

An even older plant

Russian scientists have recently grown a 30,000 year old plant from the Pleistocene era.

On the frozen edge of the Kolyma River in northeastern Siberia, in an ancient pantry harboring seeds and other stores, an Arctic ground squirrel burrowed into the dirt and buried a small, dark fruit from a flowering plant. The squirrel’s prize quickly froze in the cold ground and was preserved in permafrost, waiting to grow into a fully fledged flowering plant until it was unearthed again. After 30,000 years, it finally was. Scientists in Russia have now regenerated this Pleistocene plant, transplanting it into a pot in the lab. A year later, it grew forth and bore fruit.

Survival of the coldest

If you think that permafrost only reveals dead or dormant flora and fauna, think again.  Canadian scientists have discovered a bacterium growing at -15oC, the coldest temperature ever reported for bacterial growth.

”We believe that this bacterium lives in very thin veins of very salty water found within the frozen permafrost on Ellesmere Island,” explains Whyte. “The salt in the permafrost brine veins keeps the water from freezing at the ambient permafrost temperature (~-16ºC), creating a habitable but very harsh environment. It’s not the easiest place to survive but this organism is capable of remaining active (i.e. breathing) to at least -25ºC in permafrost.” 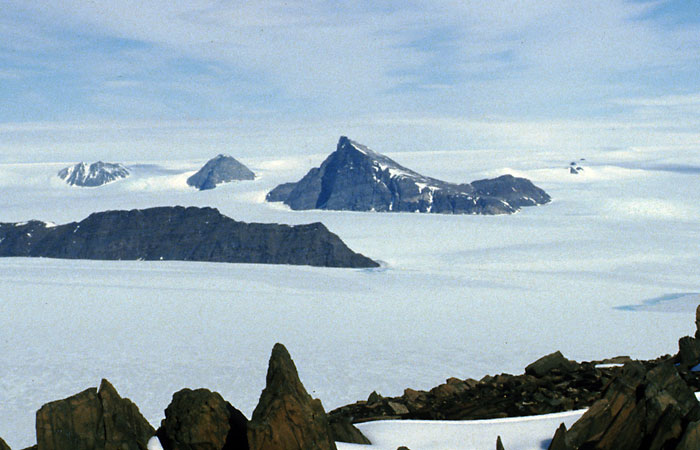 Isolated peaks known as Alfabet Nunatakker at the edge of the Greenland Ice Sheet in East Greenland, viewed from Tillit Nunatak. These nunataks represent the summits of 2000 to 3000 m-high peaks that are almost buried by ice. Photo M. J. Hambrey, 1987.

A nunatak is a prominent peak poking proudly above ice.  If you want to monitor ice retreat you can simply count nunataks from year to year.  If the number of observed nunataks increases then the ice level must be dropping.

At the south end of Dexterity Fjord on the northeast coast of Baffin Island is an unnamed icecap that I will refer to as Dexterity Icecap. Gardner et al (2012). Gardner et al 2011 and Sharp et al (2011) both note that the first decade of the 21st century had the warmest temperatures of the last 50 years, the period of record. identified that the mass loss had doubled in the last decade versus the previous four for Baffin Island.

Landsat images from 1990, 1994 and 2011 are used to assess the changes in this icecap. Red arrows are used to identify nunataks within the icecep, bedrock islands amidst the glacier. In 1990 and 1994 there are three evident nunataks. By 2011 there are six nunataks indicating this ice cap is thinning. In 2011 the ice cap has only 5-10% snowcover, the rest has melted away, not a good sign for an ice cap.

If you have not already read it, you may also enjoy: