Now you will perhaps inquire with astonishment how it is possible that ice, which is the most brittle and fragile of substances, can flow in the glacier like a viscous mass; and you may perhaps be disposed to regard this as one of the wildest and most improbable statements that have ever been made by philosophers.
Hermann von Helmholtz, 1865

It's very difficult to make absolutely pure ice, even in the lab.  Most especially in natural conditions, when ice forms it includes all sorts of chemicals and particles - and they affect its properties significantly, as does the water itself and the bottom topography.

Ice in shallow water often bears an imprint of the water bottom.  For example, a garden pond lined with bricks or tiles will often have a winter ice cover with a tessellated appearance.

The formation and melting of ice are influenced by very many factors.  For instance, suppose a sheet of thin ice is overlaid by snow.  How does the snow affect the ice?  If the ice is surrounded by shores or by thicker ice, then surely it will dish downwards under the weight of the snow.  When the snow melts it will leave a meltwater pool.  That pool will be lens shaped.  The ice will be in tension.  As soon as the meltwater exits via a melted hole, the tension will be relieved suddenly.  A pattern of radiating cracks is to be expected as a result of mechanical shock.  Bubbles of gas under the ice would be likely to have a similar effect.  The phenomenon of strange patterns in ice has been investigated, but there are no firm conclusions.  There are various theories to account for some specific instances.  In the references is a link to a rather interesting free pdf on this topic. 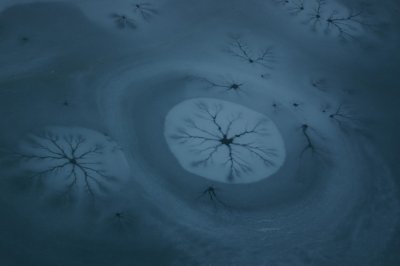 
The importance of ice physics

For as long as we have no great understanding of exactly how ice does what ice does, we can have no exact understanding of the formation and dissipation of seasonal and multi-year polar ice.  We have much to learn.

... most models of melting don’t incorporate information about sea ice microphysics. So some researchers are pushing to learn more about the ice’s physical properties and to include the findings in next-generation analyses. “It’s clear that we need to do better in terms of understanding and predicting the fate of the polar ice cap,” says Kenneth Golden, a mathematician at the University of Utah in Salt Lake City who studies sea ice. “Monitoring transport processes in the sea ice is critical for understanding climate change.”
...

Studying sea ice microphysics is challenging, in part because of the sheer complexity of the material. Unlike the freshwater ice found in glaciers or lakes, sea ice is a complicated mix of pure ice, brine, air and solid salts. How those materials are distributed within the ice changes constantly as temperature, salinity and other factors rise and fall.

“We haven’t tackled these complexities in modeling the ice cover, but I think we’re at a place where we can make a lot of progress,” says Marika Holland, a climate modeler at the National Center for Atmospheric Research in Boulder, Colo.

The full article is well worth reading:
http://www.sciencenews.org/view/feature/id/59874/title/Melting_at_the_mi...

I wish to thank Bente Lilja Bye for publishing Satellites and Sea Ice, which reminded me just how strange ice can be.

Ice and Glaciers, A Lecture Delivered at Frankfort-on-the-Main, and at Heidelberg, in February, 1865,  Hermann von Helmholtz; Translated by Edmund Atkinson
http://www.bartleby.com/30/13.html
The Chatter Box
More Articles All Articles
About