The sharp decline in ice extent slowed somewhat during July.  Some people are claiming this as a sign of recovery.

If you are going downhill at full throttle and you take your foot off the gas you will slow down.  A bit.  But if the brakes aren't working you are in for an exciting time.

Loss of ice extent has slowed down.  A bit.  In plain language: loss of ice continues to be a lot more rapid than has been considered normal historically.

Almost the entirety of the main Arctic Ocean ice cover shows substantial amounts of open water.  The ice is freely mobile in most areas.  Both the North West Passage and the Northern Sea Route, aka North East Passage seem to be easily navigable by icebreakers.

Plans are in hand to take traffic through the Northern Sea Route.  Two oil tankers recently collided en route from Murmansk to Chukchi Peninsula, apparently without suffering too much damage.

Although the two tankers were the first to sail the North East Passage this summer, they are not the only ones earmarked for a passage.

Sovcomflot intends to carry out the first major oil shipment from the Varandey terminal on the coast of the Pechora Sea through the North East Passage to Japan later this summer.

The shipping company will use one of its purpose-built 70,000 dwt ice-classed shuttle tankers.

If the trial is successful, the vessel will be the first ever oil tanker to sail the entire Northern Sea route from Northwest Russia to Asia.

Some adventurous sailors are planning to attempt both routes in small ships this year.

Several sailboats will try to go through the Northwest and Northeast Passage this Arctic summer. It is not a given that they succeed, says Arctic ice expert and adventurer Knut Espen Solberg.

This part of the article was inspired by discussions in a comments thread on Neven's blog.

Two cameras were placed on a floe near the North Pole early this year.  I have made an animation of some key events captured by camera #2.  There were many days with snow.  I have omitted those many boring shots of snow on the camera lens.  You can tell when it has snowed by looking at the snow line against the large buoy.  The image below shows points to focus on: 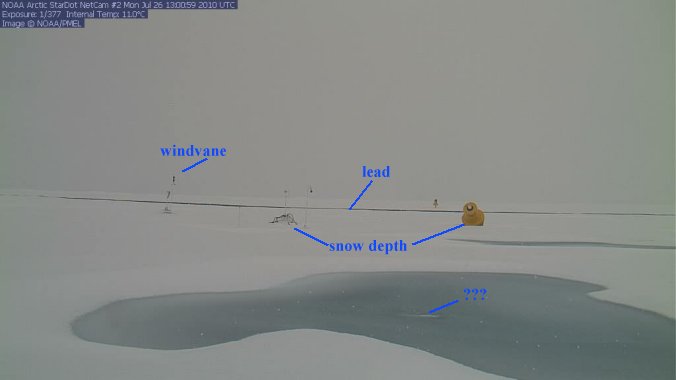 In the center of the meltpond is a feature marked with three queries.  I think that this is a hole linking meltwater and ocean.  This next image shows a before and after shot which seem to show a change in water level in the meltpool.

The hole first appeared in an image from July 21 01:09:43.  Prior to that shot the lens was too much obscured by snow to see the meltpond clearly.  At the time the hole appeared there was substantial relative ice motion and the nearest buoy tilted towards the camera.  That tilt continued afterward.  Note especially 'shoreline' at right and at front right.

Now that you know what to look for, here's the animation.  The first frame shows the people deploying the experiments.  I have included it to give a sense of scale.

Animation of selected images from:
http://www.arctic.noaa.gov/gallery_np.html

Note how the snow builds and levels the scene.  After the meltpool forms it is sometimes fringed with thin ice.  Snow occasionally falls on the thin ice but does not persist.  At no point does the meltpool freeze over entirely: if it did it would be totally covered with snow at some point.

Judging from the lead, and assuming the pool is connected to the ocean below, this floe is now less than 1 meter thick.  Note the apparent crack at right in the last few frames, between the two meltwater pools.  Could this floe be in process of breaking up?


How thin is the remaining ice?

Last year the multiyear ice was effectively gone by the end of October.   There seems to be a principle of 'late to grow - early to go' at work.  New ice formed very late last year in Hudson Bay and the Barents Sea as reported by NSIDC.  There was a brief spurt in early April which vanished rapidly.

It seems to me from the way the ice has fragmented and dispersed generally that most of the newer ice which forms between floes in winter has either melted or fragmented.  Mobility in the ice as reported historically by explorers was a matter of leads opening and closing and of ice forming piles and ridges.  Leads are cracks which form when ice is placed in tension.  When large masses of ice press against each other the ice thickens through ice riding over ice, or through the formation of compression ridges.

When a floe is over-ridden it can be swamped: pressed below the water surface.  This is referred to as 'negative freeboard'.  The water overlying a swamped floe can ice over.  This form of rotten ice can appear to satellites as thick multiyear ice.  A survey last year found a lot of rotten ice.

Barber et al.: In situ observations from Canadian Research Icebreaker (NGCC) Amundsen indicate that the multi-year sea ice pack in the Southern Beaufort Sea was not as ubiquitous as it appeared within satellite remote sensing data products in early September 2009. A large sector of what was remotely sensed to be multi-year sea ice at 7 to 9+ tenths ice cover, consisting primarily of multy-year ice floes, was in fact a surface of heavily decayed ice composed of some small multi-year floes (1 tenth) interspersed in a cover dominated by heavily decayed first-year floes (1 tenths) and overlain by new sea ice in areas of negative freeboard and in open water between floes.

Regardless of what some people are desperately trying to convey to their uncritical audiences, the Arctic is most definitely not cooling.  8000 years of cooling has come to an abrupt end as the Arctic warms at a speed which should give any rational human being cause for concern.

"The Arctic is an early indicator of what we can expect at the global scale as we move through the next few decades ... So we should be paying attention to this very carefully,"


More articles on the Arctic and related topics:
The ChatterBox Arctic Index

Dirk Notz on Arctic Sea Ice - hat tip to Artful Dodger for the 'heads-up'.
http://www.realclimate.org/index.php/archives/2010/07/an-icy-retreat/
The Chatter Box
More Articles All Articles
About