Patrick Lockerby
The Whale, The Torpedo And Cruelty To Animals,

a brief history of the use of electricity in medicine and the development of the pacemaker.

Part 2: The Age Of The Electricians

Part 1, was about early uses of electricity in medicine.  The 'torpedo' of the title was once recommended as a cure for headaches.

To reiterate somewhat from part 1, the philosopher Giordano Bruno noted that if some old wives tales were to be believed, such as the notion that pigs might fly, then "there is something wrong with nature."  Etymologists might be interested to note that - to the best of my knowledge - this is the earliest recorded use of 'pigs might fly' as a satirical remark.

Giordano Bruno was burned as a heretic in 1600, denied the right to think.

"I've a right to think," said Alice sharply...
"Just about as much right," said the Duchess, "as pigs have to fly."
Lewis Carrol

In the same year that Bruno was burned at the stake - 1600 - William Gilbert published the results of his scientific experiments with magnetism and static electricity.  That year, plus or minus 50 years, marks the end of the age of authorities and the beginning of the age of the experimenters.  This brief history covers some of the experiments which led from the discovery of the science behind electricity and magnetism to its use in modern medicine.


Some Discoverers Of Electrical and Magnetic Phenomena

Gilbert was the first man to research the properties of the lodestone (magnetic iron ore) in a truly scientific manner and in depth.  He constructed the first ever electroscope - above - to aid him in his investigations of the power of attraction of substances such as amber.  His needle electroscope resembles his compass but it was not magnetized.  He called the substances which attracted like amber electricks, from the Greek name for amber: elektron.  The Latinised form - electrus - of the Greek word was modified in 1646 by Sir Thomas Browne, to form our modern term: electricity.  Gilbert also laid navigation by means of the magnetic compass on a strong scientific foundation.  Gilbert published his findings in De Magnete, published in 1600.  If Galileo, whose life spanned the year 1600, is justly called the father of science, then Gilbert may justly be called the father of electromagnetic science. 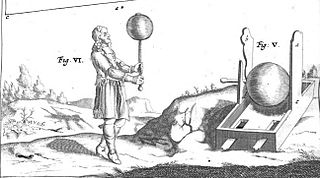 Von Guericke is widely known for his experiments with sulphur ball friction machines and with vacuum pumps.  A contemporary illustration - above - shows him conducting experiments.  The sulphur balls in the illustration are drawn too large: contemporary texts describe them as being as large as a baby's head.  Von Guericke also experimented with vacuum pumps.  We shall see below that having heard of Picard's (below) 'barometric light', Francis Hauksbee combined these electrostatics and vacuum pump findings to produce light.

Picard was carrying a mercury barometer on a very dark night. He noticed a glow in the empty glass tube above the mercury column which he established as being due to the motion of the mercury in the tube.  This barometric light was described in Curieux Traitte De L'Aiman by Joachim d'Alence as resembling the glow of white phosphorus.

Mr. Picard has [a mercury barometer] at the Observatory, which in the dark, when one moves it enough to make the quicksilver jiggle, flashes like sparks and throws a certain flickering light which fills the entire part of the tube where it is void;

Attempts to replicate the glow with other barometers were unsuccessful.  Normally that would be a scientific death knell for the topic.  Fortunately for the advance of science, Francis Hauksbee's curiosity was aroused at a time when he was experimenting with evacuated spheres and friction.  What would happen, he wondered, if he put some mercury in one of his spheres ?

The Bakken Library And Museum

Following on from the sulphur ball experiments of the more famous Otto von Guericke, Hauksbee experimented with glass spheres.  On learning of barometric light he experimented with the idea of putting some mercury in his spheres and then pumping out the air.  The idea did not come in a flash or out of the air - both puns intended.  He analysed the main and obvious factors which may have contributed to the production of light: glass, mercury, vacuum and motion.

I will cite from the excellent write-up at The Bakken Library and Museum:

This was a time when indoor illumination involved fire: fireplaces, candles, oil lamps. It was dim, smelly, and hazardous. A new source of light could be very useful. Francis Hauksbee's first appearance before the Royal Society in 1703 was with his new air-pump, and experiments showing the "mercurial phosphor". Hauksbee did many interesting and beautiful experiments with mercury and the mercurial glow. (How I long to repeat some of them! But the modern world is less tolerant of mercury than the science of Hauksbee's day was.)

In October of 1705, Hauksbee renewed his studies of this glow. The glow involved glass, mercury, vacuum, and motion. He'd already shown mercury and light inside an evacuated bell-jar; now he tried rubbing other substances inside evacuated jars. He eventually decided to see what would happen if he simply rubbed an evacuated glass globe, which could be rapidly spun on an axle by a "great wheel". One of the axles was hollow, and connected to the globe through a valve. He connected it to a vacuum-pump, and sucked all the air out. When he spun the device in the dark, rubbing it with his bare hand - behold, there was a glow. Eventually he had made a light source bright enough that "... Words in Capital Letters were legible by it". 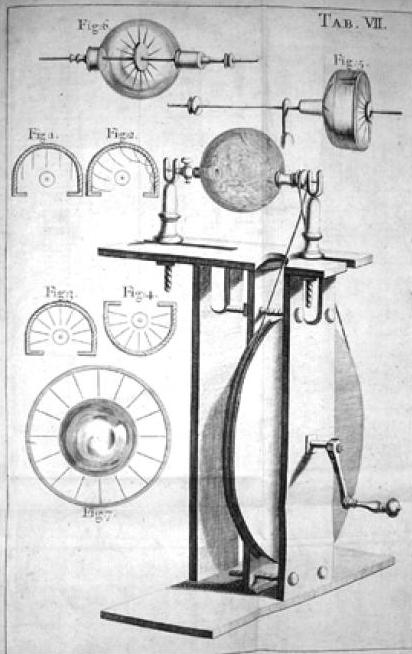 In part 3 we shall see how the public reacted on seeing images of Jimmy with electrodes.
The Chatter Box
More Articles All Articles
About