At Some Point Modern 'Star Wars' Writers Are Just Trolling Us With This Parsec Stuff
By Hank Campbell | November 5th 2019 03:50 PM | Print | E-mail

Tweet
I didn't see "Star Wars" when I was in theaters the first time. We were poor and living in rural Pennsylvania and never went to a movie as a family, but I did see it when it was re-released in 1981, after "The Empire Strikes Back." They had given it a new name ("A New Hope") but it retained an old gaffe.(1)

At age 15 I was a literate enough science-fiction reader to know what George Lucas apparently did not - that a parsec was not a time, so making the Kessel Run in under 12 parsecs didn't make a lot of sense. But at 15 I was with friends and in their parents' car on the way home we debated whether or not it was poor writing or something clever about the universe. One of my friends said the Kessel Run could be a black hole and the closer you got the more dangerous it was, so a 12 parsec "curve" might be a legendary feat because of the risk. 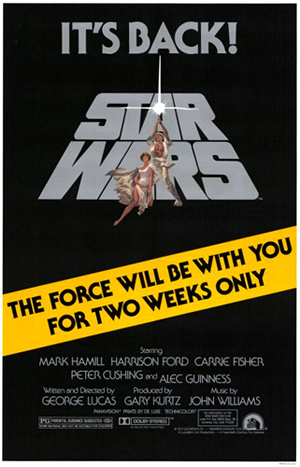 Parsec errors are back too. Except this time I predict it's intentional.

Plausible but nothing else about the prose seemed to be all thought well detailed so I was skeptical that it wasn't just a silly mistake. Over time, the Kessel Run did indeed become legendary, as a science screw-up in cinema. But even the people ridiculing Lucas often got it wrong because parsec isn't really a simple distance either. But in "The Mandalorian" it sounds like in the Star War Universe it is. Sorry, that last sentence was so bad George Lucas could've written it.

The parsec gaffe is so well-known now that using it in "The Mandalorian" - wrongly - has to be intentional. Since a parsec is only 3.26 light-years/19 trillion miles it's not all that impressive as a distance. But it isn't just a distance. Parallax is the difference in the apparent position of an object from two lines of sight and a parsec is the distance to an object whose parallax angle is one arcsecond.

The line from the star to Earth, at top, and the line from that star to the sun, below, can be said to represent a radius measure, with the star marking the center of this (not drawn in) circle. One radian (radius as measured along the circle’s circumference) equals 57.2958 degrees or 206,265 arcseconds, so a star with a parallax of one arcsecond must be 206,265 times the Earth-sun distance away. Image via astronomy.stackexchange.com.

As you probably know, "parsec" is a portmanteau of parallax (from the Greek parallaxis, meaning 'alternation') and arcsecond (1/3,600th of one degree).  Sir Frank Watson Dyson created the portmanteau in 1913 and it stuck because it makes life easier for astronomers. A star with a 1/2 arcsecond of parallax is two parsecs away, one with 1/3 arcsecond is three parsecs away, etc.

Astronomers use arcseconds because the angles from out tiny planet to stars in the universe is so small a degree is meaningless. But an angle difference equivalent to the width of a human hair from 65 feet away can lend some precision. Since we're on earth, EarthSky notes that a parsec is defined as "the distance to a star that shifts by one arcsecond from one side of Earth’s orbit to the other."

"Star Wars" fans eventually grew up and became "Star Wars" writers so my friend's (and that of a million other nerds at the time) speculation about the Kessel Run being a dangerous distance from a hazard was eventually built into a "Star Wars" film.(2)

But come on, for writers to invoke parsec again, and even further to say in "The Mandalorian" that the bounty hunter is "the best in the parsec" has to be a way to incite fanboy rage and cackle at all the Twitter mentions.


It's embedded to start at 50 seconds, where the line is spoken.

The Andromeda Galaxy, the big spiral we see in the sky, is 8,000,000 parsecs from us and these Star Wars people are warping all over the place. A parsec is nothing. It would be like someone bragging I am the best bounty hunter within a quarter inch of them.

They have to be trolling us because in 2019 no one is making that error. Just like kids won't be damaged by the word "revenge" in a movie title, as George Lucas claimed they seemingly would've been in 1983, no one is getting parsec wrong unless they are doing it on purpose. And it's working. Neil Tyson took the bait, as did plenty of others. I predict we'll enjoy the show next week and find out just why this seeming error was in the trailer.

(1) The third film in the trilogy got a preemptive rename. Though the original title was "Revenge of the Jedi" the film became "Return of the Jedi" because Lucas felt Revenge was too angry sounding for the kids he needed to go and buy his Ewok toys. By 2005 Lucas no longer felt he couldn't use "Revenge." He also hated religion by then because he had science-d up a way that The Force was no longer a hidden current that binds us all, and was equally available to all, you had to be born with a genetic optimization to be able to use it.

(2) You probably didn't see it. Disney has not yet let "Star Wars" do the thing that made Pixar and Marvel great; let people make their own film without a lot of social authoritarian input. They fired the incredible Phil Lord and Chris Miller, the brilliant minds behind "21 Jump Street" and "The Lego Movie", and replaced them with veteran Ron Howard. Lord and Miller then instead made the brilliant "Spider-Man: Into the Spider-Verse" while "Solo: A Star Wars Story" went on to be a disaster.