Britain's The Guardian Has A Real Gullibility Problem When It Comes To Science
By Hank Campbell | December 16th 2019 03:07 PM | Print | E-mail

Tweet
The Guardian is a left-wing newspaper in the U.K. and so it's no surprise that they cop to a lot of the issues that left-wing people in the UK agree with - all modern biology leads to Frankenfoods, all energy except solar and wind are bad, (they seems to have finally reversed course on that one), and while I noted in Science Left Behind that kooky progressives believe in a lot more woo than the normal public - from psychics and ghosts to UFOs - I didn't think they thought chemicals were traveling back in time.

Yet in order to believe that a class of pesticides called neonicotinoids - targeted seed treatments that were designed to be a lot better for ecology than broad sprays - was killing fish in the 1990s, Guardian has to believe it traveled back in time.

As Henry Miller, MD, notes in his recent article, a rather meanderthal study is the same old chemophobia shtick, but this one caught the attention of not just Guardian, who you expect to promote this without skepticism the same way Mother Jones or Russia Today or Scientific American does, but even National Geographic got sucked into falling for it.

The problem is they didn't really read it, they instead fell for the graphics that the authors intentionally made confusing, because without manipulated graphics they have no case. As Miller notes, they only measured actual pesticides for one year, 2018, but drew a chart showing fish dying all the way back in 1993. Fish were dying long before that, 1993 was simply the only year fish deaths and "neonics" overlapped. How could neonics cause deaths 9 years before they were released in 1993, using measurements from 2018? Obviously none of that is real. 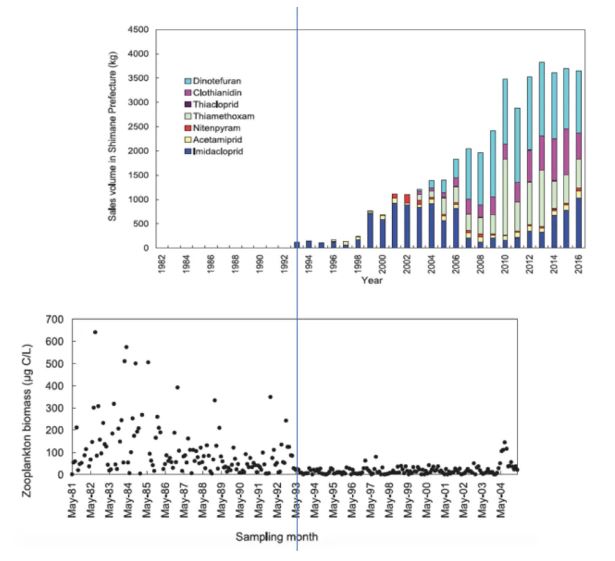 How did it get so much coverage with so much wrong about the paper? Either journalists believe in chemicals traveling back in time or they read a press release, misunderstood what the results actually showed, and wrote a sloppy article because it matched the proclivities of their audience, their journalists, and their funders.