Extinction Rebellion Doesn't Want You To Have Kids Because Of Climate Change
By Hank Campbell | October 3rd 2019 04:00 AM | Print | E-mail

Tweet
A few decades ago, some people who didn't want to kids anyway got a great excuse to not do what they didn't want to do - the Population Bomb, courtesy of doomsday prophets like Paul Ehrlich and John Holdren.

In their book "Ecoscience" (with Anne Ehrlich), they argued that if people did not choose to stop having kids, it was worth considering having government do it for them. They advocated a Planetary Regime, and with it the prospect of forced abortion and sterilization.

Today, people who don't want to have kids but want to fend off complaints from their parents have a new out - climate change. And groups like Food Tank and Extinction Rebellion, overwhelmingly white and wealthy, the kinds of people Ehrlich and Holdren wanted in charge of the world, can provide supporting arguments.

An organic industry consultant who writes HuffPo clickbait articles like "Climate Change Is Sexist", a blogger for Extinction Rebellion, and someone else all get together to pretend there is a science reason for their nihilism. 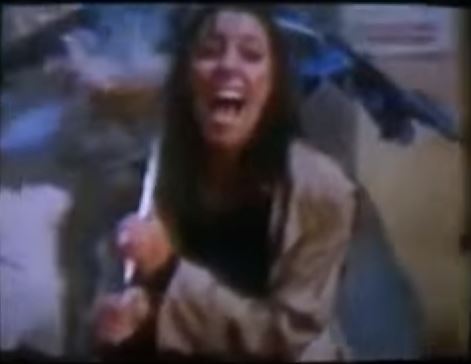 A screen cap from the 1988 comedy "Scrooged", starring Bill Murray. Her umbrella is being melted by acid rain, a narrative commonly promoted at the time. Only the chemical names have changed today.

Storms are actually not more frequent or more harsh than in the past, at least not yet, nor are droughts more severe, but it's the kind of narrative that dreary gloomsday apologists engage in.

You can try to listen here, but you probably won't finish it.