Tweet
I've had "Frostpunk" on my Steam wishlist since early 2018 and though it has gone on sale numerous times I didn't buy it. The reason is not hesitance about the game itself; I work on a PC all day, the last thing I want to do is sit at a desk at night.

But at the end of last week it went on sale for consoles and I was happy to literally pay twice as much just to sit on a couch and not use a mouse and keyboard. And it was worth the wait.

Frostpunk is Steampunk, except when Global Cooling brings a new ice age

If you are not familiar with "steampunk", it is a genre of fiction where 19th century technology took a different path. Think Jules Verne and steam-powered zeppelins without the wild divergence and leaps in progress that reality often brings. Evolutionary technology rather than revolutionary.

If you've been in a coffee house and witnessed gatherings where top hats, parasols, and goggles are over-represented, it's some form of steampunk. It's not new, authors have been planting a flag in time and writing "what if?" stories forever, but it really took off in the 1980s, when a group of authors picked Victorian England and it got popular. If you are older like me you may remember reading Michael Moorcock or others who did similar things prior to that. Basically, take the steam engine and then rewrite the future pretending you didn't know the real past. What would a Babbage computer become?  What if there was no free market and government subsidized steam power so that was the best you could do?

The "punk" is irrelevant, "steam-punks" is a joke made by one of the authors about his fellow Victorian science alt-history writers.

And punk is irrelevant in "Frostpunk" as well, this is serious business. If don't hit the ground with your goggles in place and ready to go, you are going to die. A lot.

You're next to a huge 19th century coal furnace as the game begins, because Krakatoa and Mount Tambora erupted, filling the skies with soot and sulfuric acid, the solar cycle is in a dimming phase, and the resulting global cooling and crop failure caused society to break down.

Your ragtag band left London because of resource scarcity and knowing there is coal in the north, Manchester or wherever, you head there. When the game opens, you're in charge. You have people and basic technology and a valley where a generator you found is.

And your doom is coming.

It's unforgiving. In one run though, since it was a relatively balmy -4 degrees Fahrenheit the first day, I didn't turn on the generator to save coal and that morning people were dead. It went downhill from there and I got the first of many identical end screens the game would console me with: 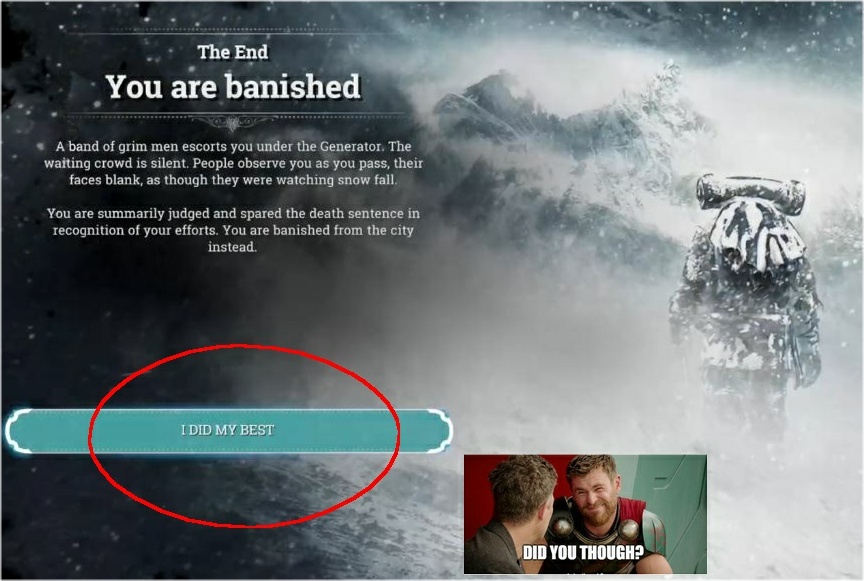 But once you understand how to succeed - embrace the kind of confident mania only those with tents, hubris, and a coal-fired heater possess - this screen will be pushed farther and farther into the future. But you are going to die a lot. I liken it to "Dark Souls" because you just have to accept a lot of failure.

As you gather resources and begin to build a city, you can build a culture.  You do that with laws. Do you want children to work or not? Any jobs or just helping in the clinic you are going to need to help with frostbite? When you discover the other groups you came north with are probably dead, despondency really sets in and you can choose to quell dissent using police or religion. 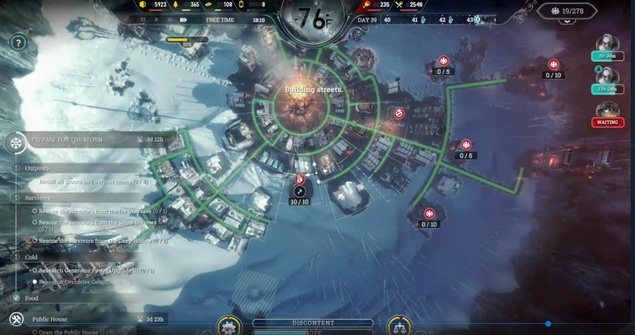 Those green lines are streets and the rings they show are radii for where your coal furnace will heat. It's big, so you can put 80 people in the inner ring, but that means other things that require heat, a medical center, day care, a workshop, will be on the outside. You can place heaters, but they are also coal-intensive. As your technology advances you can add another ring to the generator, but the coal requirement goes up a lot.

This is not Sim City. The game is sheer panic because nature has a surprise for you. And that surprise is that the weather is going to get even worse. And you'll be blamed. 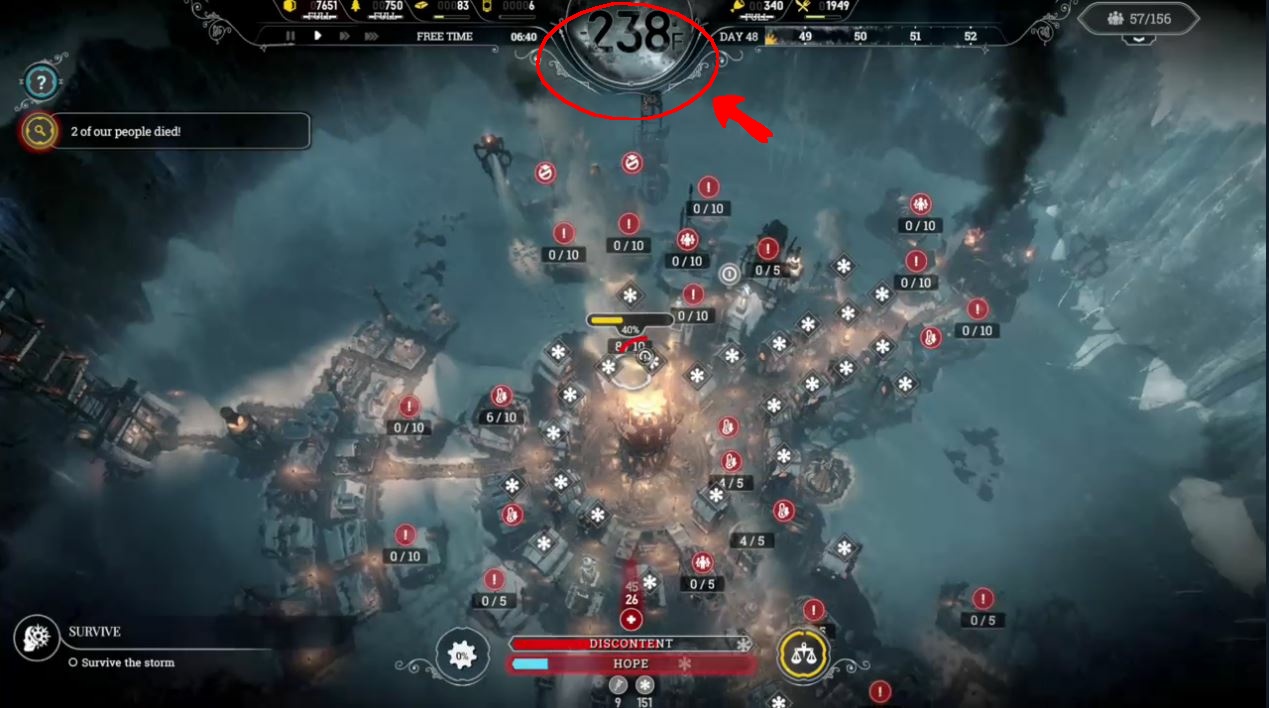 If that looks like it says -238 degrees Fahrenheit, yes it is. Nature wants to kill you, just like in the real world. Nothing works at that point. Your only hope is enough coal, enough food, and a way to keep people calm. Choose your cultural paths wisely.

The "story" mode ("A New Home") is a gripping two-six hour sprint, and to me that's a good thing. I am on a console, I don't want to play a real-time strategy game for a week. In the old "Civilization 2" days on PC, sure, but this has scenarios and an "endless" mode if you really want to see how long you can last.

The changes they clearly made to use a controller make it pretty intuitive, though you are going to be sore from your thumb right through the muscle to your index finger. Every action requires you to press a trigger button and then use the joystick to move around, which can be a lot of strain if you are iron man-ing it in one night. I went through it twice last night and I definitely felt it, but I wouldn't play a shooter for six hours straight so perhaps it is a testament to the game that it kept me on my couch for that long.

Worth every penny. And I am cheap. I wasn't willing to spend half that on Steam because I knew I would never play on a PC but I bought this on Xbox the day it came out. I didn't do that with "The Division" and I wrote a whole article about the science of that. That tells you "Frostpunk" is a good value, if you like dystopian 19th century alt-history, anyway.