Hank Campbell
It's November of 2019 which means that we have officially arrived at the opening of the science fiction cult classic "Blade Runner." Let's talk about what it got right.

I was at a local theater showing of "Evil Dead: The Musical" a few weeks ago and at the end was a lot of 1980s music. The crowd that evening was overwhelmingly high school theater geeks and they knew every song, from "Come On Eileen" to "Take On Me." They knew them well enough to mash up dances from other periods while they were singing.

"When you were in high school, did you listen to 1950s music?" I asked my wife, because I did not. 1940s music, yes, but until "Rock Around The Clock" the '50s were dead to me. Leave that I–vi–IV–V doo wop progression to the malt shop era, thankyouverymuch. It seemed just as strange to me that youth of today would know 1980s music so well. They're really music literate, I said. The 1980s were the best decade, she countered.

Probably both, because instant media has made every decade, every movie, every book, available immediately, and that means good content from any decade can remain popular.

But the past does seem to have a hold on culture. One of the few good X-Men movies was "Days of Future Past" but it was a short two-episode comic book arc from 1981. The Thanos arc in Marvel films was from the 1970s, the "Daredevil" series was set in the present but evoked the Daredevil from Frank Miller's 1980s comic set in Hell's Kitchen, with its bodies dumped into the Hudson on bleak evenings and bars that somehow stay open with only one person inside.(1)

"Terminator" is 35 years old, and has a sequel coming out today.(2) When I was a kid there was zero chance a sequel to "It's A Wonderful Life" was going into theaters, much less a fifth sequel. But Terminator is getting its fifth sequel in November 2019 but today marks the time of Ridley Scott's "Blade Runner" from the summer of 1982. And nearly every young person knows it. 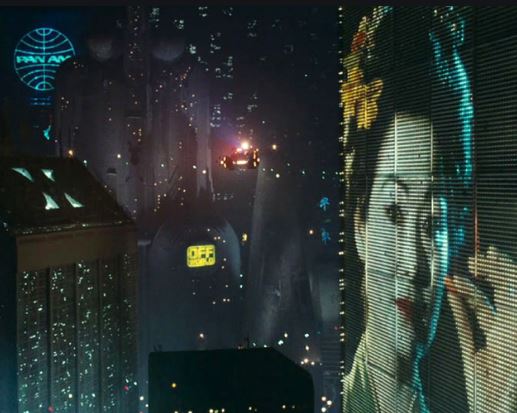 "Blade Runner" went into theaters in 1982 but needed to be set in the distant future to sell its fantastic vision(3) of androids :"Replicants") that look human - and that future was November of 2019. Today.

"Blade Runner" was made in 1980s America but was not a product of 1980s America. One of the few things that decade did not have a lasting impact on was science-fiction(4), so "Blade Runner" instead originated in a 1960s story(5) and for its future had a Los Angeles that was "Hong Kong on a very bad day" as stylized by French artist Moebius, with a musical score via Greece, made by a British director who was derisive of American unionized film-making.

The good news, unlike in the movie it doesn't rain all of the time. The bad news is instead of having androids fighting futuristic battles in space we have human kids eating Tide Pods. Instead of flying cars we have pedestrian deaths on the rise, mostly due to people walking into traffic with their eyes glued to tiny screens. Americans do take a whole lot of pills.

Though we are no less inundated by marketing than in the film, I can take over the Empire State Building's exterior if I pay the fee, it's more insidious.  It's hidden everywhere.

Though there is no Voight-Kampff device, an emotional polygraph machine that can tell if you are human, companies are so clever about using Big Data to converge on your real brains that not only can they distinguish real people from bots, they can hone in on 96 percent of your preferences even if you have never used the Internet - just by knowing who your friends are and if a few of them have used the Internet.

You can see the Pan Am logo in the screen cap, and the movie had numerous product placements, gaining producers some cash while promoting a corporate marketing future, but it, Atari, and Bell all collapsed afterward.(6) So the movie didn't get those right.

There is no "Cityspeak" pidgin language but almost everyone in other countries made english their own. There are no lifelike Replicants or space travel, obviously, but only people who thought theoretical physicists knew what they were talking about in 1982 ever thought faster than light travel would be here by now. We don't need Replicants fighting. America just took out yet another terrorist leader, and if it were not for the fact that he surrounded himself with children at all times, making a human extraction team essential, we could have taken him out with the QM-9 Reaper drone that came in after he blew himself (and children) up to level the compound and make sure no one created a creepy martyr shrine to him. Drones don't deceive themselves into thinking they are human, and lack the neediness of people.

We're a whole lot better off sending robots into space and then only people once everything is built. We can't even watch a football game or read Deadspin or Kokatu without political preaching, the last thing we need is space exploration being sabotaged because one of them doesn't like a politician.

The film gets almost nothing right, but that is what makes it hold up today.  It wasn't trying to be predictive of our future any more than steampunk tries to predict the past.

There is nothing more tedious than someone claiming X product is the Star Trek whatever that was predicted. Of course they predicted smaller TVs and walkie-talkies, of course they predicted a future where computers could detect disease. Everyone predicted the Internet, they just thought it would be more educational and less blamed in political posturing. Modern movies set in the past where someone invokes future technology is just lazy writing, the audience sees through it in large part because of complex films like "Blade Runner" - even though it failed at the time because film critics didn't get it. And people still cared what film critics thought then.

If you watch it now, it still holds up really, really well. "Star Wars" certainly does not. And that may be its best legacy.

Skynet should have started wiping us out 22 years ago and we didn't get retractable clothing or hoverboards by 2015. And little in "Blade Runner" came to pass either. That's a good thing, but given the curve of city crime on one side and the curve of technology on the other it wasn't wrong to be dystopian. The filmmakers were dystopian about their own work at the time. History always makes us look at things differently. Harrison Ford hated both Ridley Scott And "Blade Runner" but they are all at peace with each other now. People behind the film remember every fight and every concession but the audience only saw a final product.  For "The Terminator", the studio wanted Schwarzenegger as Kyle Reese, the co-lead and person who comes back from 2029 to stop The Terminator, but director and co-writer James Cameron set out to sabotage that selection by saying he worried he would then need someone even bigger to be the machine. O.J. Simpson was suggested and dismissed, because as Cameron later famously recounted, he didn't think O.J. would be believable as a killer.

Schwarzenegger, when asked about it while filming the sequel to "Conan The Barbarian", dismissed "The Terminator" as "some shit movie" that wouldn't hurt his career. But "Conan The Destroyer" was an absolute train wreck while Terminator is his defining role, one he'll return to this weekend.

The movie was a flop (thanks to being released near masterpieces "Star Trek II: The Wrath of Khan" and "E.T. the Extra-Terrestrial") but like many great indifferent theatrical performers of the decade ("Raising Arizona", "The Princess Bride" et al.) its real life came thanks to home VHS becoming ubiquitous. It attracted such a cult following that there are six different edits around; the U.S. theatrical release, the international release, an original workprint version, a San Diego version, a Director's Cut, and a Final Cut.

(1) Both false memories that media provide as our history today. The only way you know you are there now is the Lexus dealership - and then the numerous boutique shops with Hell's Kitchen in their names.

(2) My teenage son dressed up as him last evening to give out candy.

(3) There is a reason Ray Kurzweil's digital-theology Singularity/Ascension is always 40 years away. He won't see it be wrong.

(4) They did, however, make an impact on the science-fiction of the past. The "Steampunk" genre really came into its own in the '80s. William Gibson's "Cyberpunk" (1980s commercialism ruined the 1970s punk movement by slapping "punk" onto the end of every genre) novel "Neuromancer also had lasting impact, but Gibson watched the opening of, ironically, "Blade Runner", and did an extensive rewrite, because he felt it so perfectly captured his vision that people would assume he ripped off the movie.

(5) In the 1950s, Robert Heinlein deviated from peers in creating scientific accuracy, but by the 1980s science-fiction had become jargon-heavy and lost its story-telling style. Just like Bollywood later did Hollywood movies after Hollywood forgot how to make them, I argue that China is producing the best science-fiction since America of the 1960s. We had a Cold War for inspiration, their authors seen to have subverting communism as a science-fiction lodestone.

(6) Atari and Bell are still with us, though Atari is a shell of its former self while Ma Bell lost its government-supported monopoly so is now AT&T and regional phone companies, more valuable than ever but with phone calls orders of magnitude cheaper today than they were in 1982. Meanwhile, in California, they regulate energy so heavily, even mandating shutdowns for PG&E during windy conditions due to a 2017 fire caused by a downed powerline, that the state wants to nationalize electricity. So they are still stuck in the 1960s, when government insisted airline travel, phone calls, and electricity could never be cheaper and only government kept it from being more expensive.