Greater Adria - Ancient Continent That Collided With Europe And Was Destroyed Gets A Timeline
By Hank Campbell | September 10th 2019 06:37 AM | Print | E-mail

Tweet
Call it Atlantis if you want. but geologists have reconstructed the quarter-of-a-billion-year-long history of a long-submerged landmass. It just isn't beneath an ocean, it is below southern Europe.

The tectonic history of the landmass known as Greater Adria has been under study for a while but the new study is the first systematic time-lapse reconstruction.

Greater Adria became a separate entity when it broke away from the supercontinent Gondwana (which contained Africa, South America, Australia, Antarctica, the Indian subcontinent, and the Arabian Peninsula 240 million years ago. At 100 million years on its own, though, it was the size of Greenland, but then it collided with what is now Europe and became shattered as Europe slid over top of it. 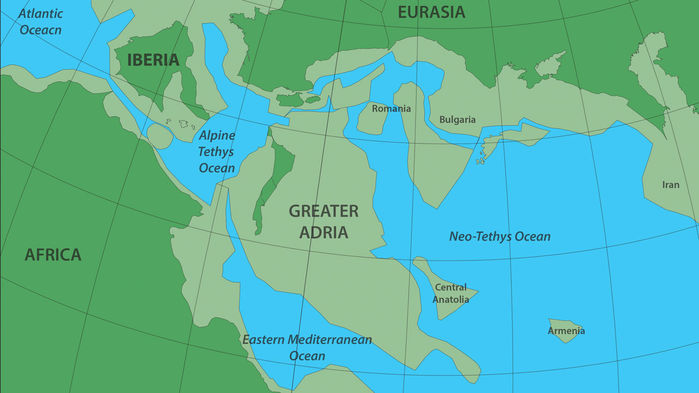 You can still find traces of Greater Adria today, in the limestone and other rocks in the mountain ranges spread from Iran to Spain, notes Sid Perkins writing for Science.