Tweet
Despite what conspiracy theorists opposed to science want to believe, career bureaucrats are mostly not political appointees - but their ranks are politically lopsided. If you know politics you know that in the United States a career in government will be a lot more appealing to one political party than another.

And political skew determines a great deal of science acceptance. Climate change, more Republicans don't buy it. Vaccines, until 18 months ago it was overwhelmingly Democrats who didn't give their kids those. Nuclear energy, agriculture, almost no area of science lacks partisan denial. Employees often want to be in government because they can shape culture and shaping culture is why US Dietary Guidelines have become pointless. So pointless they are not really guidelines, they are merely aspirational. Only 2% of Americans obey the guidelines the federal government claims are based on science. Though they have in their mandate that guidelines must be "based on the current body of nutrition science," there is often very little science in nutrition, instead there is often epidemiology. 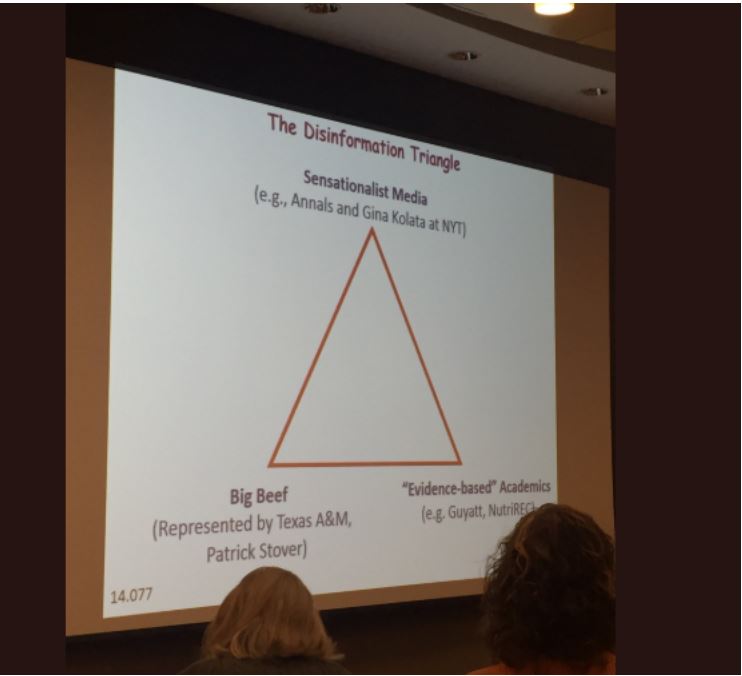 That train wreck is why over a decade ago the poorest school kids, some of whom were getting their most nutritious meal of the day thanks to public education, were saddled with aspirational vegetarian lunches that went into the garbage. The White House dictated it and *presto* USDA claims of science started rationalizing it.

Read also: Nutrition Is Vital, So Why Aren't The New Dietary Guidelines More Science Based?

Their latest war on red meat shows activism, not science, may still be the norm. Yet they will use the blanket 'we're just following the science' and 'we read public commentary' excuses, which convinces no one. While epidemiology can be a scientific process, the findings are always only exploratory because they can only create correlation. Want to believe flipping your mask up and down between bites of food in a restaurant kept you or anyone else safer? There is an epidemiology study for that. Want to believe Ivermectin can be used for COVID-19? There's an epidemiology study for that too.

In my state, California, tens of thousands of products need to have cancer warning labels on them because the state turned over its science to International Agency for Research on Cancer (IARC) epidemiology without considering that if that body got hijacked by environmental activists, as happened in 2009, the labels would be meaningless. Epidemiology can ignore dose, they only care about "hazard", so if they decide a weedkiller causes cancer in mice by using 100X the exposure any human can get - or epidemiology papers written by people and their friends on the IARC panel - it will get environmental trial lawyers mobilized.

But help no one because there is no risk. Tens of thousands of farm workers who spray weedkillers every day are ignored if a government agency counts outliers and mouse models.

Low-fat, sugar-free, trans-fats, vegetable oil, every miracle vegetable claim, weird fruits that supposedly help you sleep, they all claimed to be based on science yet were only based on food frequency questionnaires that were then used to "suggest" a link between two things. People tried to recall what they ate and then listed what ailments they had and if dark chocolate was eaten by a few more people who were healthy, chocolate was suddenly health food.

Like with osteopaths, where one Joe Mercola makes a thousand sensible D.O.s look bad, evidence-based people in the nutrition community letting loud cranks flogging an agenda get away with it are doing themselves a disservice. Meat has numerous health benefits that can't be gained using vegetables alone - like choline for developing brains. Yet USDA denies it and says eat more and more vegetables each time they update their pyramid.

Just like it would be silly for a nutrition guideline to recommend primarily meat, it is a bad idea - and bad science - to claim meat, including red meat and so-called "processed" meat - are harmful as part of a balanced diet.

There is a reason vegetarian activists have used automated online harassment, including libel, and lawsuits to try and suppress any studies that debunk their quasi-religious beliefs. They know they don't have science on their side. And neither do panel members at USDA trying to claim less meat, rather than more exercise, will improve public health.