Hank Campbell
The True Health Initiative (THI) describes itself as a nonprofit devoted to “fighting fake facts and combating false doubts to create a world free of preventable diseases, using the time-honored, evidence-based, fundamentals of lifestyle and medicine.”

That sounds like a terrific place to be, Science 2.0 does the exact same thing.

Except we actually do that. We are not instead selling a belief system promoted by scholars here. And that is what True Health Initiative does, despite the legitimate-sounding name.

Imagine a bill in Congress put forth by lobbyists for Big Pollution that proposes easing of smog standards, but they call it The Super Clean Air Act. That is what True Health Initiative is really like. A great name, but a mission that centers around protecting the work of Food Frequency Questionnaire epidemiologists who have built their careers claiming meat is killing us, not educating the public. And they do so using statistical correlation. The last thing such epidemiologists want is randomized clinical trials, legitimate science, undermining their 'our work suggests' efforts.

Its official leadership is a Who's Who of modern epidemiology, names that appear routinely in the New York Times warning us that meat is killing us all (even as meat usage goes up and cancer deaths continue to decline). Names like David Katz, MD, Frank Hu, MD, PhD, Walter Willett, MD, DrPH, and more.(1) Harvard School of Public Health, the epidemiology group that set off the modern Food Frequency Questionnaire craze, is strongly represented.

But their methods to shout down criticism of their work are so shady and conspiratorial even the rabid gun rights community wouldn't do it. Annals of Internal Medicine Editor-in-Chief Christine Laine, MD, MPH, noted, “We’ve published a lot on firearm injury prevention. The response from the NRA (National Rifle Association) was less vitriolic than the response from the True Health Initiative.”

Dr. Laine notes that before studies showing that the evidence linking red meat consumption with cardiovascular disease and cancer were too weak to be dietary recommendations was even published, the True Health Initiative summoned an army of bots to flood her email inbox with complaints. Then Katz, Hu, and Willett and more attempted to pressure the science journal into retracting the papers. They probably even violated journal embargo rules by passing the paper around to allies so they could apply pressure in advance.

They then used their conspiracy network to claim the study authors were probably bought off by Big Beef, and the New York Times rushed to print the allegations provided by their longtime epidemiology sources. Marion Nestle, reliably ally at New York University, and who will often suggest conspiracies even if she can't find them, chimed in and agreed it was probably true. They, and she, alleged one Canadian epidemiologist who got funding from a food nonprofit (to study sugar) too far in the past to merit disclosure controlled the conclusions of the entire group - about a meat systematic review conducted by 14 people.

All those female scholars in the list of 14 co-authors were being controlled by a male authority figure who told them what to believe, was what True Health Initiative was suggesting. How 1978. It's almost like casual sexist Michael Jacobson of Center for Science in the Public Interest was creating their strategy. Oh wait, he is on their board.

If you ever got a grant from a nonprofit founded by a soda executive in 1978, you can't be trusted about beef (?!)

The "industry ties" True Health Initiative were insisting tainted the study were not even related to meat. It was a grant from a group and the research resulted in an analysis which showed sugar was not a magical poison, calories are what matter, but True Health Initiative, New York University, the New York Times and more all claimed that the 2019 paper about beef was illegitimate because an epidemiologist once got funding on a study about sugar from an organization founded by a former Coca-Cola executive - in 1978.

The funding source controls the content is always problematic. Should Republicans deny science funded by NIH during the Obama years because Democrats ran the place? (2)  And True Health Initiative is downright hypocritical about their own funding. “I think there’s a big difference between conflict of interest…vs a confluence of interest. The work you do is what you care about…No one’s ever paid me to say anything I don’t believe,” claimed Dr. Katz to Rita Rubin of JAMA. Yet when it came to an epidemiologist studying meat consumption in 2019, not only did he deny the ethics of that scholar, he claimed a grant to study sugar - in 2015 - made the work on meat eating and health invalid.

It got even sillier. The Harvard epidemiologists and their allies, everywhere from IARC to the like-minded National Institute of Environmental Health Sciences, even tried to claim the data were invalid because the authors didn't disclose if they ate meat. BMJ was happy to produce one of those "come under fire from critics" pieces about its competitor.; the prior generation's equivalent of 'Someone did this and here is how Twitter reacted' junk we see now.

Dr. Laine is so relaxed about True Health Initiative bots and their militant crew targeting her that if World War III happens, I am on her side - “I can understand it’s upsetting when the limitations of your work are uncovered and discussed in the open.” That's cool under fire.

The 'past funding' allegations fell on deaf ears outside the usual Science Is A Corporate Conspiracy cabal in that northeast corridor of elite, white schools. New York University Arthur L. Carter Journalism Institute openly propagated the smear campaign against the work, as did Mother Jones employees and their other political allies in the war against science, but the public already knew what the Annals of Internal Medicine paper found was true. A normal diet was not killing people, no matter what an organization that promotes its own vegetarian diet plan claims.

True Health Initiative has raised hundreds of thousands of dollars but their Form 990 does not disclose where that money is derived. Nor how more than a tiny $18,500 of that money has been spent, even though it's over $120,000 on vague things like "management."

But we can infer where that money is coming from, because they have a "Partners" page where they list 28 different companies. 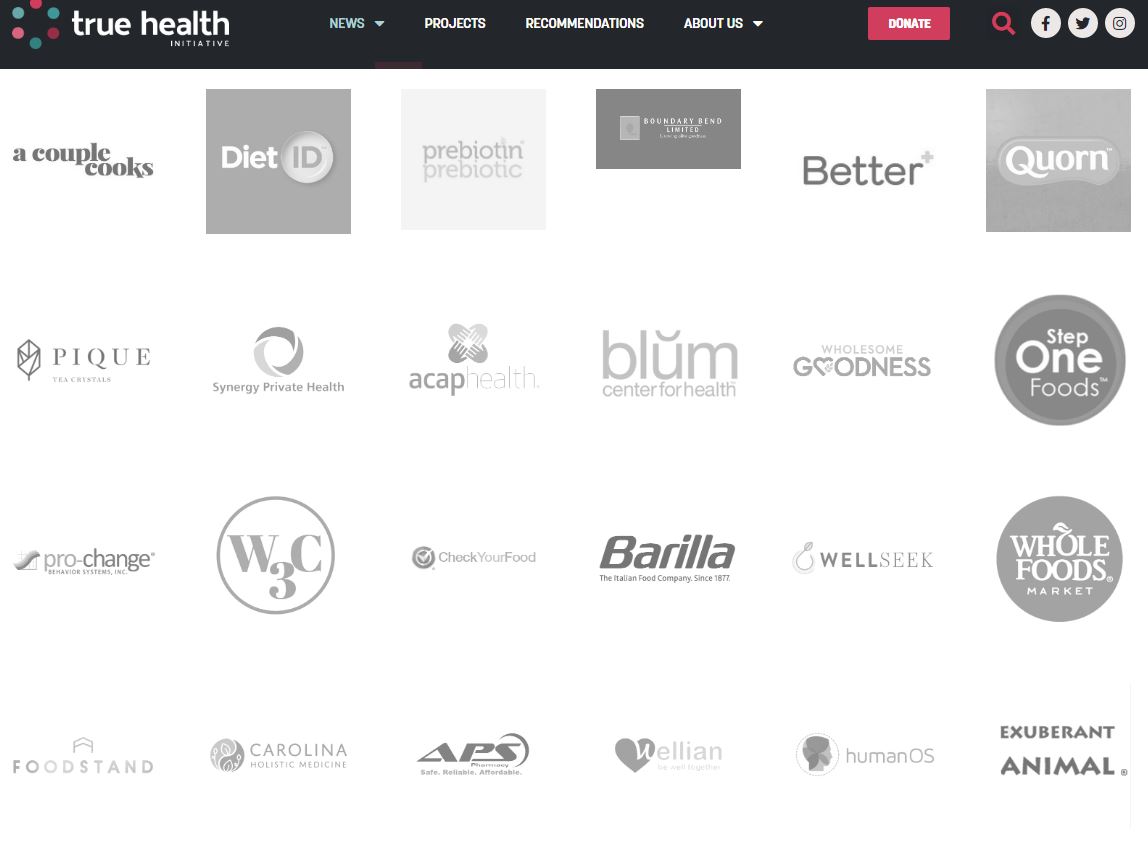 Is it irony when a group with so many industry partners accuses someone else of being industry-controlled? It may be basic human psychology. People who engage in questionable behavior often rationalize that everyone does. The old legal joke goes that when a judge asks a fellow accused of lifting wallets if he wants a trial by judge or jury the man replies, "You judge, I don't want 12 pickpockets deciding what happens to me."

True Health Initiative may simply assume everyone has "industry partners" because they do. Perhaps they think all health claims are corporate-driven because theirs are. Perhaps that is why the people involved in suppressing this science tried to get the United States Federal Trade Commission and the District Attorney for the city of Philadelphia to launch investigations into Annals of Internal Medicine. Willett essentially libeled longtime New York Times science reporter Gina Kolata in a presentation he gave, which produced a robust retort from the #scicomm community.

Holy crap nutrition is getting as bad as GMOs, with the YES-MEAT and NO-MEAT camps digging in and lobbing nasties over the parapet. Here's a slide from a presentation by Walter Willett (!) calling responsible people working in good faith purveyors of "disinformation." pic.twitter.com/n24Qe2rKOp

You know who has never behaved that way? Any beef trade group. Even Monsanto, which the activist community loves to hate, didn't engage in the kind of dirty tricks True Health Initiative mobilized.

Science Is A Vast Conspiracy Theory narratives aside, when they sought to undermine the methods in the 'beef is not killing you' studies, systematic reviews, they undermined a lot of food studies, including their own. If actual randomized clinical trials are useless for nutrition, what does that say about the Harvard School of Public Health, and everyone else in the vegetarian epidemiology sphere, with their penchant for linking diseases to what foods people wrote down in their diaries?

(2) We run a nonprofit, we will cash a check from almost anyone (sorry, Altria, not you) and if you think that will control what we produce, let's try an experiment. Send a check and tell us what to do. Then send an even bigger one and tell us what to do. Keep going until the sample size is large enough it funds a capital campaign so we can own our office rather than renting. We'll help you write the paper of the results.

(2) The International Agency for Research on Cancer had gotten so much backlash for trying to claim that red meat was as hazardous to health as smoking, World War I mustard gas, and plutonium that they responded to charges they only existed to scare people about new things - and had never found anything that didn't cause cancer - they stopped the wheels on their coffee monograph, and reversed course, suddenly claiming it not only did not cause cancer, it might prevent it. Which had just as little evidence basis as everything else they wrote while Christopher Wild ran roughshod over science.
Science 2.0
More Articles All Articles
About