Hank Campbell
An old legal joke goes that a man accused of lifting wallets is arrested brought into court. The judge asked if he wants a trial by judge or a jury of his peers. The accused replies, "You judge, I don't want 12 pickpockets deciding what happens to me."

It is a common psychological tendency to assume most people are 'like' us, that is why rationalization about behavior occurs so easily - everyone else is doing it. So what do we make of it when a journalist repeatedly claims that everyone else is a shill for corporate interests?

The obvious: That the journalist sees it everywhere because she assumes people are like her. I prefer to talk about individuals rather than issues but sometimes the journalist is the issue, because they make themselves into one.

Carly Weeks is an employee of The Globe And Mail, which is a corporation that creates content its readers want to read and it also sells the views of those readers to other corporations; people who produce products that the kind of demographic that reads The Global and Mail might want to be buy. As you can imagine, there is a lot of opportunity for corporate influence, right down to only choosing writers who will match the cultural litmus test of the audience they want to reach.

She's no Dr. Oz, there is no real reason to call out her work, except if she truly cares about informing public health, she might benefit from an intellectual reset.  And perhaps other journalists will see the problems in someone else they haven't seen in themselves and make some changes.

I never assume a mainstream journalist is creating content to appeal to a particular political or corporate agenda. I assume people are 'like' me. Yet for the second time in a few days I have seen Weeks assume that other people - people with kids and families, who recycle cans and care about the environment - must be shills if they get money indirectly from a corporation. Weeks gets money directly from a corporation so you can go ahead and draw the connection about what it might say of her that she assumes everyone she sees is a shill.

The first time I saw her make this corporate conspiracy claim was the first time I saw her at all. She suggested that the organization I run, the American Council on Science and Health, was a shill for the National Rifle Association (NRA) because we noted that it was irresponsible to compare gun deaths in Japan and the U.S. because 60 percent of American gun deaths are suicide. Japan banning guns did not stop suicide, they use rope, and they commit suicide at a much higher rate than Americans do.

Soon enough, the people that orbit journalists of every political persuasion jumped into the fray, with Weeks leading the way in her claim that we - and by association, me - are shills for the NRA.

Nothing about our work getting Dr. Oz cut down to size last year, nothing about our tireless 37 year effort to end cigarette smoking, nothing about good newspapers, such as the Wall Street Journal, heaping praise on our efforts to clarify health scares and health threats. Instead, we get a linked to a warmed-over document provided by a fired employee that Mother Jones published with the fuzzy-wuzzy "leaked" nomenclature that was all the rage for stolen documents in 2013.

Fifteen seconds of Google search and that was all she could find - I could have provided her with that, because political groups love to tear down science. Heck, why not invoke the corporate-funded SourceWatch and US Right To Know, which also agree with her politics just like Mother Jones does?

Now, I was a member of the NRA as a young person. I was also a member of Greenpeace and the ACLU. But we get no money from the NRA.

So what if we did? Does that mean we are going to suddenly start gushing about shooting down the Moon? Apparently journalists do just that if they know who buys ads for their company, right? If not, why assume anyone is different?

Journalism is a much difference beast than it used to be. When I was a young journalism student in the 1980s, the stage had already been set in transforming journalism from 'reporting' to 'making a difference.' Walter Cronkite is said to have led that change when he came out against the Viet Nam War, which had to have pained him, because it was started by the Democratic President John Kennedy and went into full gear under his successor, Pres. Johnson.

His impact was so outsized that apocryphally Nixon is said to have intoned than he if had lost Cronkite, he had lost the country.

So it may be that Weeks just makes these charges because by now two full generations of journalists have displaced objectivity and factuality, or at least the veneer of it, and she knows she was only hired to produce the kind of articles the corporation paying her can use to sell ad space to corporations that appeal to those kinds of readers. 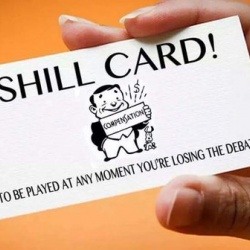 Nonetheless, she writes with a straight face:

Corporate sponsors provide health organizations with funds to help them do their work. What are those organizations giving up in return?

Take out 'health organizations' and put in 'newspapers' and the comparison is obvious.

Maybe she does not know how the real world works. It is easy for modern journalists, who get much of their information sitting at a keyboard using the same flawed Internet created by people who have mastered manipulating the Internet, to think that foundations fund all non-profits. Or individuals. But it's not true. If she were engaged in critical thinking - journalism - she would quickly learn that the groups she endorses politically hide their donor lists, and they have foundations that launder donations from corporations. Even if they didn't, why would individual donors or foundations be ethically superior? I have to wonder if she has ever asked Natural Resources Defense Council, which has $300 million in the bank, where their money comes from? They won't tell her, nor will Mother Jones, but she seemed to be fine invoking a far left political magazine about ACSH without any critical thinking at all.

On the dairy and gun control issue, I actually agree with the points she is making; I have long said that dairy is more cultural than health-based, just like I have long argued that we need to close loopholes in gun purchase laws and keep them out of the hands of criminals and mentally unstable people.

Why not just make good points? Why default to the Corporate Conspiracy narrative when the facts serve just as well?

It speaks to the larger problem of why no one trusts journalists any more, including in science. Left-wing people assume corporations on the right control journalism (the journalists themselves are dupes) while the right assumes journalism is left (because journalists are). The Wall Street Journal is right-wing, the New York Times is left. And so are all of their employees.

That narrative was created by lazy journalists - follow the money is an easy conspiracy to invoke - and it has come back to bite them.

We tend to think people are like us. I think people are honest and are not abandoning their ethics because they get a paycheck. She thinks everyone is a shill, unless they work for the same corporation she does.

That tells us a much bigger story.
Science 2.0
More Articles All Articles
About