Tweet
If you see a claim that vegetables grown using no pesticides at all, no, GMOs, even no soil don't count as "organic" you can be almost certain you are seeing a progressive journalist from a site like Mother Jones that gets 84% of its funding from corporations (albeit laundered through a foundation they created to take corporate money and which has one grant recipient) or someone else colluding with the organic food segment of environmental activism.

It's about money, not food. And that is the origin of 'no kill meat is doomed' rhetoric too. Take one look at those insisting meat grown without any harm to animals at all can never work and you can guess how they vote with 96% accuracy.  The reason is they want more vegetables, but only those grown organic. No science, just old pesticides that require 6X as much strain on the environment per calorie. 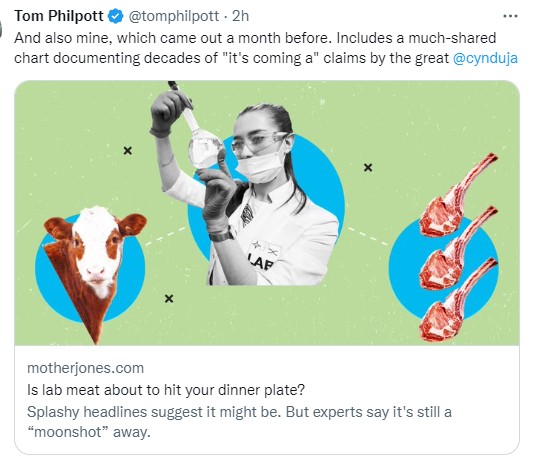 Yet they use the weird rationale that only true 'we will use free markets against them because we are so clever' juvenile thinkers possess, and the literate lament. They say it is not viable right now and therefore never can be. The same argument they use about nuclear power - also a science that progressives hate - decades after their Boomer Elites, President Clinton and Senator John Kerry, drove the industry into the ground.

The first telephone was not viable, it couldn't call anyone. And the first train had to undergo testing. If activist journalists had existed then we'd never have mass transportation, it would be stuck in 'needs more testing' mode.

Despite criticisms from the far right about NPR, they are actually a lot more balanced about science than the New York Times, and not blatantly on the take like The Guardian. Not being reliably opposed to the science they are supposed to oppose may be why their fair discussion of the topic is getting 'not a real liberal' condescension from activist pseudo-journalists on Twitter. They are 'disappointed'...because it is not a hit piece on science like a good environmentalist is supposed to do.

What journalists with an agenda against science leave out is that the biggest hurdle this product faces is not the free market, it is bureaucracy. Environmentalists and the political party they lobby created an environment where a salmon that grows a little faster takes two decades to approve. Where competitors to an expensive product like the EpiPen can't get on the market without spending hundreds of millions of dollars. Or insulin, because it is made using GMOs and therefore partisan journalists oppose it.

It is the same red tape that has prevented 18,000 megawatts of offshore wind power, 371 wind farms and 102 solar plants from getting approval. They say they want progress but use environmental lawsuits and the machinery of government to insure energy generation only happens where poor people live, and food stays expensive.

Mother Jones may be getting back to science as well. Philpott is no longer employed there, though it took a decade after our Freedom of Information Act investigation exposed the organic industry trade groups which listed him on their "A-Team" for getting the message out.