Tweet
If you are old enough to remember Baghdad Bob, Muhammad Saeed al-Sahhaf was the spokesperson for Iraq dictator Saddam Hussein who, no matter how bad things were, insisted they were on the verge of winning against a United Nations that was going to dethrone him.

He's been dead for years but if he were still around, it's easy to imagine China would want to use him. 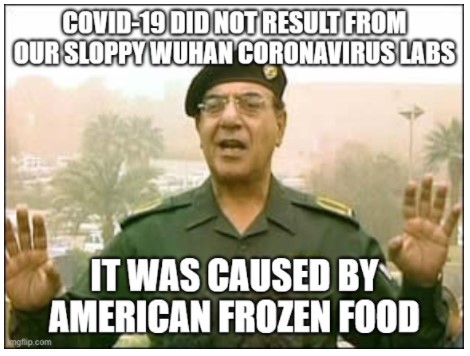 Instead, they have Dr. Shi Zhengli from the Wuhan Institute of Virology helping assure us that China may have removed their database of 16,000 bat coronavirus samples during the 9 months they wouldn't let anyone in - and then only as part of a short PR tour by a sympathetic WHO epidemiologist rather than a virologist - but that doesn't mean they have done anything wrong. What adds to suspicion is that Shi is not listed as a member of the party - unthinkable for a government employee at her level. Which means she is likely a reliable communist trusted by leaders, but they don't want an official affiliation risking scrutiny on democracies.

It is no surprise that Americans and Europeans placed naive trust in the Chinese Communist Party - clearly in the US hating Trump was more important than loving evidence - but it is shocking if we continue to believe the most dangerous dictatorship in the world is going to be transparent about a worldwide pandemic next door to two of their labs. Or allow any scientist to speak to anyone unless they know exactly what she is going to say.