Dr Fauci is the most trusted public scientist on all matters regarding SARS-COV-2, however he gets his pure logic wrong on the subject of Covid-19’s origin. That scientific research was the transport mechanism for this virus from Southern China to central China is a valid logical hypothesis. Like all scientist he is not an expert on every aspect of a complex phenomenon. He is a public health expert focused on saving lives in the here and now and doing a great job of it. To him discussion of the origin of the virus is irrelevant. He claims that the logic of the hypothesis that a lab was involved in transporting the virus from nature into the city of Wuhan is “circular logic”. “[T]hat means it was in the wild to begin with. That's why I don't get what they're talking about [and] why I don't spend a lot of time going in on this circular argument,” Said Dr Fauci 1.  It says something that we all easily accepted blaming the origin on a wet market but the idea that well educated scientist at a well-funded government lab could screw up is unthinkable.

It is VERY important the emphasize that it was not genetically engineered which is not the same as the prospect that it could have somehow or the other leaked from a lab which does work on exactly this type of virus.

A circular argument is defined as starting from a conclusion then ignoring evidence that points away from it to be sure you reach your biased conclusion. The irony is that Dr Fauci’s argument given in that quote IS circular. The logic that a lab was involved in transporting the virus from the natural reservoir of such viruses to central Wuhan, Hubei, China is not. It is one hypothesis which needs to be looked into by people who are neutral and have nothing to gain or lose from the outcome.

It should be noted that I like many others bought fully into the idea that this virus spread from a Wet Market, the Wuhan Huanan Seafood market. Since the virus started in Bats and bats were sold there. The reporting out of China is that that particular market sold many different animals but probably not bats 2 . Since that market did not sell bats we must look elsewhere for how that virus got to the market.

The virus which originated unquestionably in the Bats of southern China a minimum of 1000 km away from Wuhan Hubei province where the first cluster of known cases of Covid-19 were reported. 3, 4,5

That those bats carry this type of virus is well known. 3, 4,5

The virology labs of Wuhan performed research on such viruses is a matter of published scientific record. 3, 4,5

Given those are facts which are both well known and linked to published peer reviewed and cited in other publications scientific papers.

The simplest, most linear, logical inference is that the Wuhan branch of China’s CDC is the entrance through which SARS-COV-2 entered central Wuhan.

This lends factual support to the idea that the virus just may have leaked from the Wuhan CDC. Which is only 280 meters away from the Huanan seafood market 6,8 9. The shortest distance between two points is a straight line. 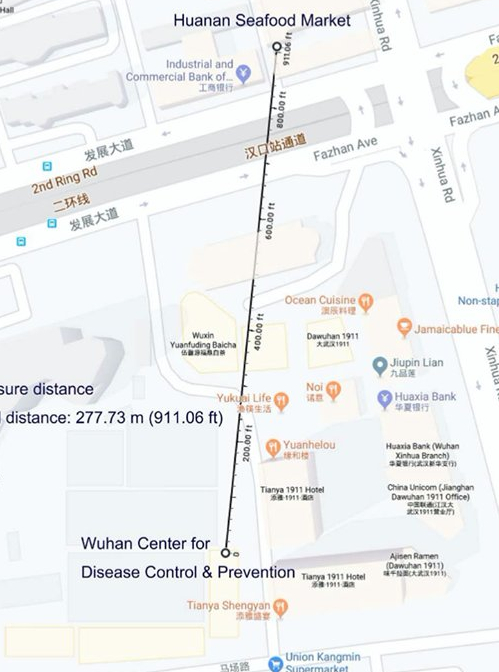 Once this infectious agent is there just one mishap infects at least one researcher who may or may not have been made seriously Ill. This person then infects others in the community which includes a fresh food market within easy walking distance for a young adult.

I was first turned onto this hypothesis by the formerly China based Youtuber Laowhy86. However, publishing about it here did not feel right since I didn’t have the resources or knowledge to confirm any of it independently. I am skeptical of some of what is in the following video but he presents a very good summary of the information available in open sources for those who know Chinese 8.

The Washington Post has done journalism which looks into this. There are good reasons to doubt this namely that it requires a chain of perfect coincidences for this lab to be the entry point for SARS-COV-2. While “nature” without the help of a lab can do this just by a single chance encounter...but has millions of chances to do that.

Thankfully neither path is “likely” if not there would be a new coronavirus pandemic every year. The question is which hypothesis fits the data we have or is at least not contradicted by data.

Other Paths From Nature To Central Wuhan.

The standard story is that this virus originally infected a person in or around the Huanan seafood market . That they caught it from a wild animal being sold for food. These Wet Markets are not regulated at all. So while most shop keepers don’t want to poison their customer base and run a shop that is clean enough, not all do. Some butcher meat right on the sidewalk. All of these wet markets wash down the street and everything with water, hence the name. It was standard practice to call the derision these places got, even the term “wet market” “racist” a month ago.

There is scientific research which indicates that this may have originated in Guangdong province.  This province borders Hong kong 11.

The earliest person known to have gotten the virus at the Huanan Seafood market sold… seafood...not exotic animals. 6 Furthermore the earliest known patient in Wuhan has no link to the wet market. 10

This all argues strongly against the Wet Market as the origin.  While saying it came "from nature" but not specifying exactly how raises more questions than it answers.  In nature a virus spreads by community transmission.  If it started naturally in Guangdong there should've been tens or hundreds of thousands of sick and dead people in the province that contains Shenzen and borders Hong Kong.  Shenzen, has a high concentration of foreigners.  Hong Kong as a free(ish) press.  If there was a huge outbreak originating there it would've been known.

The Hunt For Patient Zero.

That is as The New scientist called it and it is appropriate in a deep sense. Was Huang Yanling patient Zero? Is she dead, or Alive? Does she even still work on virology or any other science? There are good reasons to question this aspect of the story even though the mysteriousness behind it is what makes it interesting. The biggest mystery is, as Mr Tye points out in his video why doesn’t the Chinese Communist Party have her make a public appearance and deny this whole thing.

Independent journalist on the Chinese language internet, as well as those who are from America but fluent in Chinese may have found the name of patient zero Huang Yanling 7 9. From the publicly available research record we know the following about her. We can conclude a few things from the totality of these facts Huang Yangling:

This image that is a couple years old, of a person of interest, from deep inside a totalitarian communist state funded research apparatus is right out of a Tom Clancy movie.

Right out of “The Hunt For Red October”. This whole aspect of trying to find patient zero could be called “The Hunt For Red September”. In reference to a month where the very first patient likely became infected.

The important conclusion to draw from this connection of facts known as of May 5th 2020 is that we don't know for certain where the virus came from but we are pretty sure where it did not come from.

It did not originally jump to humans at the Huanan Seafood market in Wuhan.

It was not engineered at the Wuhan Institute of virology.

It originated in nature and may have found its way out of the Wuhan CDC to the Huanan seafood market in the person of a researcher at the Wuhan CDC.

We will know if this "pure nature" hypothesis is true if retrospective analyses of specimines from Guangdong province reveals that tens of thousands of people were infected with SARS-COV-2 in September - November 2019.  If the data does not reveal that the only hypothesis left standing will be that the virus first made the jump in a lab mishap.

This is linear, logical, and based on openly verifiable facts.

Put another way if this originated from a hot dog stand across the street from the CDC in Atlanta, Georgia USA, and the CDC was doing research on this type of virus would anyone doubt the lab may have had something to do with it?

Last but not least it says something about humanity that we were all so eager to blame this on the regular ordinary people of Wuhan who sell seafood, meat, vegetables, and also animals most of us would never eat for food.  Yes it was unsanitary in some parts of that market.  Yes sanitation matters for public health.  There is more than a hint of elitism in how so many were so willing to believe the Wet Market hypothesis without any evidence.

For my personal part I apologize to the people who sell at the Huanan Seafood market.  The world at large owes them a bit of an apology as clearly their activities did not start this.  At the same, time I will say that they and the researchers at the Wuhan CDC are likely the first victims of this tragedy.

It is likely all they were trying to do is learn how to prevent a pandemic not to start one.