Alex "Sandy" Antunes
The PBSKids show "Arthur" ran an episode featuring a new character, Carl, who has Aspergers Syndrome.  Aspergers is either an autism-like condition or a form of high-functioning autism, depending on which definition you subscribe to.  Its marked by good intelligence and memory, difficulty learning social cues, and a tendency towards non-supervillian monologuing about a favorite topic.

And how good a job did they do of portraying an Aspie?  The show already has an asthmatic kid (Buster), ADHD twins (the Tibbles), and a woody-alleneque neurotic (George), so it's not like Carl will really stand out.

Thank the stars that it was just an ordinary episode, not a half-hour "very special espisode".  It wasn't that heavy handed, unlike, say, Poochie.  The framing had minor character George meeting Carl the Aspie.  There was a short description of Aspergers by a parent, a brief freak-out when Carl meets George's freaky ventriloquist dummy, and then... the best part.

Here is the totally awesome explanation by the Brain of what having Aspergers is like.  It's a brilliant two-minute "walk a mile in his shoes" bit set on another planet.


That said, in the full episode, my favorite bit is when Carl starts monologuing about trains, and George just walks away, talks to the audience a bit, then returns as Carl is wrapping up.  It's subtle, but that's often the best way to deal with an Aspie monologue-- just patiently let the person finish, but make sure you're still there when they wrap up.

For opinions on the validity of episode as a whole, I checked out response from the community at WrongPlanet.net. The most frequent criticism of this bit is humorously, "trains, why'd it have to be trains".  Aspies tend to learn deeply about a specialized topic, and the example usually used in the literature is trains.  So it's become a cliche, an Aspie rattling off details about trains.  If that's the major criticism, I think they did a good job.

But that quote got me thinking of a similar one, said by a character who:
a) has difficulty with social relationships and can't bluff or lie worth a darn
b) works alone, by choice, and often is stymied by opponents with better social skills (more allies)
c) obsesses on a topic few care about and tends to lecture on it at the drop of a hat
d) engages in inappropriate risk-taking behavior
e) gets in a lot of trouble for not trying to fit in
f) is really good at puzzles and spatial problems

"Snakes, why'd it have to be snakes?"  I submit to you that Dr. Indiana Jones is clearly... an Aspie. 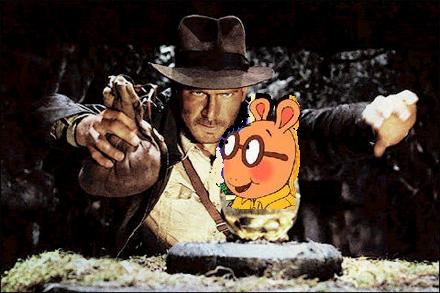 Alex
Astronomy and Science every Fridays, The Satellite Diaries every Tuesday, and twitter @skyday