Erin Richards
Every type of disease has a specific treatment program. We have drugs to treat symptoms of countless illnesses and maladies, but viral infections continue to elude treatment. While we have vaccines to prevent initial infection of some viruses and other medications to treat problematic symptoms, there is little one can do to prevent a virus from replicating and causing disease. Viral infections can be lethal and without treatment options, we are left with our own natural defenses to fight off viral invaders. This is about to change.

Researchers at UT Southwestern Medical Center in collaboration with Peregrine Pharmaceuticals have published a study in Nature Medicine demonstrating the success of their broad anti-viral drug bavituximab to cure lethal viral infections in animals.

This study was based on an observation made by Dr. Philip Thorpe, a professor of pharmacology at UT Southwestern and senior author of the study, who observed that when cells become infected and overtaken by a virus, the PS molecules flip their positions, hindering their normal signaling functions for cell repair or recycling due to damage to the cell. The PS molecule is a part of the phospholipid family which
form the membranes of our cells, consisting of a phospholipid attached
to an amino acid, serine. The amino acid is usual positioned on the
inside of the cell, but upon infection, flips to the outside. Exposed PS allows viruses to evade the immune system, impairing normal immune function and masking infection.   This specific molecule and action therefore provides a new target to rid the body of viruses. 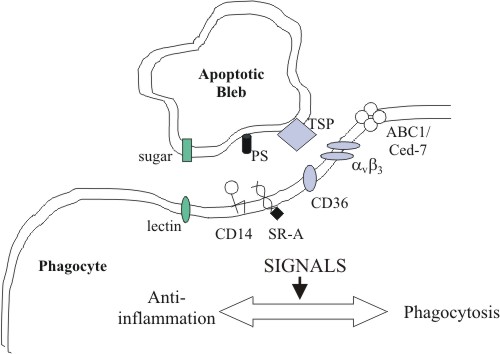 This figure shows the recycling of a cell by a macrophage.The macrophage recognizes the cell due to a combination of signals, including PS exposed on the outside of the cell. Photo credit: Rice University

As a result, his laboratory developed an anti-PS antibody, bavituximab, which binds to the PS molecule on the outside of infected cells. With the antibody bound to the outside of the cell as a marker, the immune system is signaled to move in and destroy the cells before the virus has a chance to replicate and spread to other parts of the body. By signaling the immune system quickly, it can more effectively destroy and eliminate the viral infection. Supporting Thorpe’s postulate, researchers have found that PS is exposed on the outer membrane of cells infected with HIV, influenza, herpes simplex viruses, hemorrhagic fever viruses, and measles as well as smallpox and rabies virus families.

"When injected into the bloodstream, bavituximab circulates in the body until it finds these inside-out lipids and then binds to them," said Thorpe. "In the case of virus infection, the binding raises a red flag to the body's immune system, forcing the deployment of defensive white blood cells to attack the infected cells."

The study reported today, examined the activity of bavituximab in animal groups exposed to two different lethal viruses, cytomegalovirus (CMV) and Lassa fever virus, a hemorrhagic fever virus classified as a class A bioterrorism agent by the CDC. The results showed significant anti-viral activity against both groups. The first experiment saw groups of guinea pigs infected with a virus similar to Lassa virus recover from the infection upon treatment with bavituximab. 50% of the treated group survived while the control group showed a 100% mortality rate from the infection. The anti-PS also cured mice infected with CMV, which is often found in those with suppressed immune systems such as in AIDS or autoimmune disease patients. 100% if the mice infected with CMV and treated with bavituximab recovered fully while only 25% of the control animals survived the infection.

"Based on these findings, anti-PS antibodies such as bavituximab may represent a completely new class of drugs for the treatment of life-threatening viral infections," said Thorpe. "By targeting a property of the host cell rather than the virus itself, anti-PS antibodies have the potential to treat a range of viral infections, and they should be less susceptible to the viral mutations that contribute to the development of drug resistance."

Viruses  adapt quickly to both our immune system's defenses and anti-viral drugs. Their mutation rate is extremely rapid as they search for vulnerability and take forms not susceptible to treatment. By developing a treatment which targets a host cellular response instead, the results are much less vulnerable to viral mutation.

This image shows the HIV virus mutation cycles to escape both immune system response and drug treatment. HIV's ability to mutate is one of the reasons why treatment is so challenging. Photo credit: Washington State University-Microbiology

"Recent non-affiliated research has further confirmed that exposed PS has immunosuppressive properties and is also clarifying its involvement during viral infection of cells,” says Dr. Melina Soares, lead study author and UT Southwestern instructor of pharmacology. “Our data go a step further, providing compelling evidence that exposed PS itself is a promising anti-viral drug target that is involved in the pathogenesis of multiple viruses, suggesting the possibility of achieving broad-spectrum anti-viral effects using a single anti-PS agent. We look forward to further exploring the potential of bavituximab and other anti-PS antibodies against viruses for which there are few or no effective therapeutic options."

Bavituximab is currently being studied in clinical trials for treatment against hepatitis C virus (HCV) and in preclinical trials for treatment against HIV, cytomegalovirus (CMV), viral hemorrhagic fever and other serious viral infections. These results are of great interest to the US Defense Threat Reduction Agency (DTRA) who funded Peregrine research of biodefense programs worth up to $ 44.4 million for the development of bavituximab and similar anti-viral agents.

"It could very well be that this is a generic feature of enveloped viruses," says Soares. "It could lead to a new, broad spectrum anti-viral treatment."