Erin Richards
It seems that cherries are the new ‘super food’ to strike a craze in the US. Citing the effects of cherries to slow aging due to antioxidants, they contain a class of free-radical fighting agents called anthocyanins, which are not just found in cherries.

In 2004, the Journal of Biomedicine and Biotechnology dedicated an entire volume to the subject of anthocyanins, which are found not only in cherries, but in blueberries, pomegranates, cranberries, sweet potatoes, Elderberries, and grapes. Various berry juices also contain the antioxidants like grape juice, wine and other extracts.

According to those in charge of the “cherry industry’s” PR, cherries have the powerful antioxidants (anthocyanins) as well as amounts of melatonin, which can help regulate your sleep cycle. According to the Cherry Nutrition Report, cherries have an extremely high amount of antioxidants, as well as vitamin A, C, potassium, magnesium, iron, folate and fiber. Additionally, tart cherries contain melatonin, which has been linked to regulation of circadian rhythms and sleep cycles in mammals. 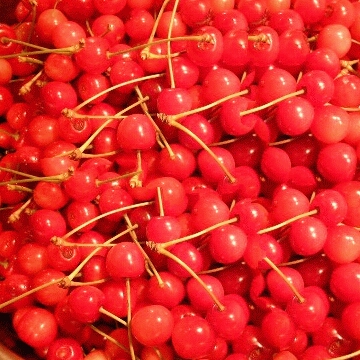 Cherries are a source of the antioxidant, anthocyanins, which give the cherry its bright red color. Photo credit: Georgia Tech University

So what does this mean for your health? Antioxidants reduce inflammation and ease pains from diseases like gout and arthritis. There is also indication that the ingredients in these fruits could help prevent insulin resistance syndrome as well some cancers.

They also claim that eating cherries can help heart disease, combat fat and weight issues, and help stave off diabetes. These are lofty claims and antioxidants or no, that’s a big job for a little berry.

Although it may seem hard to believe, there are research studies to back some of the claims of the protective and healing powers of cherries.

Free radicals are molecules or atoms that contain unpaired electrons. Free radicals are unstable and if unchecked, can cause oxidative damage to the cells or body organs. Having antioxidants in the body as a source of readily available sources for oxidation is a way to protect against the negative effects of free radicals. Photo credit: Western Oregon University

Antioxidants have taken center stage for scientists studying food and health, and the quest for bigger and better antioxidants is never ending. So what about the oxidants in this equation? The oxidants, better known as free radicals, in the body are Free radicals are atoms or groups of atoms with an odd (unpaired) number of electrons and can be formed when oxygen interacts with certain molecules. This unpaired electron makes the atom or molecule unstable, and in its quest to find another electron to pair with, can create more and more free radicals. Free radicals unleashed in the body are extremely detrimental to the structure of the body, and can damage cell structures, tissues and even organ through excessive oxidation (aka taking away of electrons). Thus, the antioxidants are a source of molecules which can safely interact with free radicals and terminate the chain reaction before damaged occurs to the body. Free radicals occur naturally within the body during metabolism and other activities such as exercise.

Thus, antioxidants may hold the key to the onset of certain diseases such as some cancers and heart disease.

According to Italian researchers Federica Blando, Carmela Gerardi, and Isabella Nicoletti, the antioxidant activity evaluated in tart cherries was extremely high. Their article, published in the Journal of Biomedicine and Biotechnology showed a significant and active antioxidant properties based upon tests including the Oxygen radical absorbance capacity (ORAC) assay and the Trolox equivalent antioxidant capacity (TEAC) assay. Measured and evaluated together, results of these assays showed high antioxidant absorbing activity from tart cherry extracts.

Claims that cherry-rich diets could reduce risk of diseases like heart disease and insulin resistance syndrome have likewise been supported by research studies.

Researchers from the University of Michigan found that animals with significant amounts of cherries in their diets had lower cholesterol levels and reduced amounts of triglycerides in the plasma. The addition of cherries to the animal diet also reduced visceral fat in those animals, which could prevent health problems from excess fat around vital internal organs. Inflammation was also reduced in the animals with cherries added to their diets. Put together, the reduction of cholesterol, fatty acids and fat tissue and inflammation means a decreased risk for development of Type II diabetes.

Building on these findings, the same researchers found and published a year later, their findings that animals given a cherry-enriched diet saw a reduced body weight and fat loss of 14%. This could have important implications as certain areas of excess fat, such as the stomach, are associated with higher risks of heart disease and atherosclerosis.

But what about sleep? Can eating cherries help you regulate your natural sleep patterns? According to researcher Russel J. Reiter, Ph.D, a nutrition researcher at the University of Texas Health Science Center, it can. Melatonin is a chemical produced by the brain and responds to light and time signals to stabilize our sleep and waking patterns. Reiter’s recent research also shows that melatonin acts as an antioxidant as well, and acts to protect the body from oxidative stressors.

This graph shows the sleep pattern of a rhesus monkey, whose sleep patterns are similar to human rythyms. Melatonin is made in the pineal gland of the brain and is produced in the "dark" period of the cycle. Researches postulate that melatonin production is key for seasonal mating in certain mammals as well as the regulation of other cycles. Photo credit: University of Colorado at Boulder
"When eaten regularly, tart cherries may help regulate the body's natural sleep cycle and increase sleep efficiency, including decreasing the time it takes to fall asleep," says Reiter. "And, because cherries are so rich in other antioxidants, such as anthocyanins, you get other important health benefits."

So eating some cherries could help you sleep better, more easily and adjust to sudden time changes like Daylight Savings and travel, which can cause jet lag.

Perhaps the age command of parents to “eat your fruits and vegetables” was on to something.  Whether or not you should eat only cherries is up to you, but there is some truth to the health benefits offered by antioxidants and other compounds found in these tart treats as in other fruits and vegetables.