Erin Richards
Imagine waking up but not being able to get out of bed. One day you are enjoying life to the fullest, but within a couple of years, you cannot walk unassisted.  You lose track of where you are and what you are doing while your muscles refuse to cooperate with your brain.

This is a likely scenario if you are one of the millions of people worldwide that suffer from Multiple Sclerosis (MS). Characterized by the destruction of insulation (myelin) around the nervous system, MS is one of the world’s most debilitating diseases.  According to the National Multiple Sclerosis Society  there are approximately 400,000 Americans living with MS as well as 200 more that are diagnosed every week.

Although most people who suffer from MS have relatively normal life spans (severe MS can shorten life) the quality of life decreases greatly as patients experience increasing limitations on their daily lives. Numbness, pain, paralysis, loss of motor control and cognitive function can all occur to someone affected by MS. 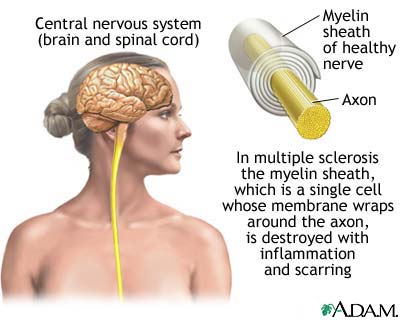 Currently, there is no cure for MS and treatment options are limited. The majority of treatment for MS stems from management of ongoing symptoms. However, this bleak outlook is changing.

Bayer HealthCare Pharmaceuticals Inc. has developed a drug that has proven effective at MS disease modification. Their pharmaceutical, Betaseron, has been shown to delay progression of MS and to reduce the number of clinical events of MS. Adapted from protein interferon beta 1b, occurring naturally in the body, Betaseron interferes with  immune system T-cells that attack the protective myelin of the nervous  system. Betaseron also prevents certain proteins in the body from triggering this autoimmune response.

At the World Congress on Treatment and Research in Multiple Sclerosis, Bayer announced the results from its 5 year BENEFIT study, which proves that early treatment with Betaseron delays the onset of more MS episodes, effectively decreasing progression to clinically-definite MS (CDMS).

Betaseron is currently approved by the FDA to reduce the number of MS related episodes in patients. The results from this study propel its momentum into the forefront of MS treatment. Many people wait for MS treatment after a first clinical episode. As normalcy returns, the need for attention and treatment fades. But waiting for treatment may result in greater neuronal damage.  The results of the study showed that people who were treated with Betaseron directly after the first clinical manifestation of MS reduced their chances at another clinical episode by 37 percent. Patients reported a high quality of life and also improved their cognitive functions.

Dr. Mark Freedman, a professor of Neurology at the University of Ottawa and principle investigator of the study clarifies the importance of these results. “These results confirm that treatment with Betaseron after the first MS event or attack can reduce the risk of developing MS over five years compared to delayed treatment.”

One of the major goals of Betaseron is to allow people diagnosed with MS to live without major limitations for as long as possible. "Changes in cognitive function have important implications for a patient's quality of life. Changes in cognition, along with fatigue, can be a reason for early departure from the workforce,” says Freedman,” Patients treated early with Betaseron fared better in tests of cognitive function compared to those with delayed treatment, which is good news for people with MS.”

Although Betaseron may not be a cure, it offers a greatly improved look for those diagnosed with MS. A delayed progression of MS symptoms and reduced chances of clinical events with a greater quality of life mean that those who live with MS can enjoy a much fuller and complete lives.