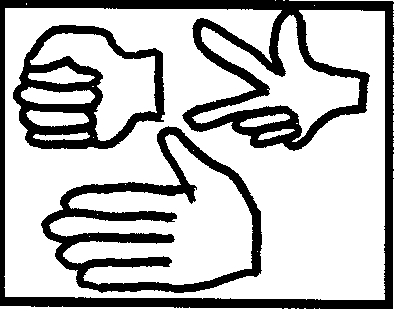 Humans are very, very bad at being random. In roshambo, aka rock, paper, scissors, this leads to probabilities and patterns which you can exploit to give your RPS opponent(s) severe and repeated thumpings. There are two ways to go about this: knowing the psychology and creating new psychology.

First, it's useful to understand the generally held associations of the three symbols: rock is solid, aggressive and steadfast; scissors are aggressive in a more tactical way; and paper is flaccid, like shooting a very wet toilet paper spitball. Because of these (some claim), men are more likely to shoot rock, while women are more likely to shoot scissors. This also means that paper is habitually undershot. So shoot rock——it beats the feminine scissors, while remaining safe due to paper's improbability.

But everyone knows this and so rock has the reputation as the choice of rookies.

If, before you started playing, you inserted into your explanation of RPS strategy the phrase "rock is for rookies", you'd be priming your opponent NOT to shoot rock. Having done this, you could shoot scissors knowing it would win or tie. The crux is accurately evaluating your opponent's skill level.