What is the farthest we can theoretically go? Would we ever be able to visit the galaxies shown in Hubble's Extreme Deep Field? Could we even travel beyond these and reach the edge of the observable universe?

Suppose you are a googolionaire and money is of no issue. Suppose also that technology has evolved dramatically and that money will buy you the latest rocket technology capable of cruising close to the speed of light. Thanks to relativistic time dilation, for every year you age you would travel much farther than a light year. If you accelerate your rocket to higher and higher energies and speeds closer and closer to the speed of light, this dilation effect increases and the distance traversed between your birthdays would increase without limit. 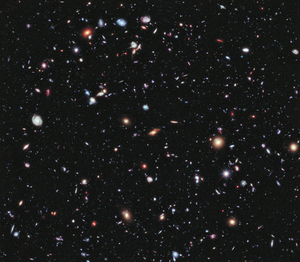 
But why so clumsy? Why not take maximum advantage of time dilation and travel at exactly the speed of light? You would travel over many light years while your time would be standing still. So you better invest your capital in a transporter. A transporter that converts you into an energy pattern and beams this pattern to a target where you are reconverted into matter. If all of this would be available and reliable technology, would you be able to visit the most distant galaxies?

We know since Edwin Hubble's 1929 galaxy redshift observations that our universe is expanding. And since the end of the last century, we know that this expansion is accelerating. It is the acceleration that makes all the difference. It puts fundamental limits to where you can travel, no matter how far you travel.

Sounds enigmatic? Time for an analogy that clarifies the fundamental impact of acceleration on the performance of transporters.


On ants, worms, and chess boards

Imagine an ant walking along an incredibly long worm. While the ant is walking, the worm grows. Let's assume the worm grows linearly. This means that the speed at which the distance between its head and its tail grows is in constant proportion to the speed at which the ant walks. Now suppose the worm is so long that its growth outruns the walking ant by a factor hundred. So for every centimeter the ant walks, the worm grows by a meter. Under these circumstances, will the ant be capable of walking from the tail of the worm to its head?

The surprising answer is "yes". This can be understood using a simple animation. The linear growth of the worm can be realized by cell division happening at a fixed number of discrete positions along the length of the worm. You need a gigantic number of such 'division sites' for the worm to grow a hundred times faster than the ant can walk, but the key point to note is that the number of growth sites is finite and constant. The animation shows ants (orange dots) passing one such division site. And if ants can pass one such site, they can pass arbitrarily many.

Now this would be a nice analogy for photons traveling in an expanding universe, were it not that the universe is not expanding linearly. Rather, the universe is undergoing an accelerated expansion. And that makes all the difference.

Back to the ant and the worm. Suppose the growth of the worm undergoes an acceleration. Such an accelerated growth can be realized by allowing not for a fixed number of division sites, but to have division sites at given length intervals. This means that if the worm doubles in length, so does the number of division sites. Below animation shows an ant walking along a worm undergoing accelerated growth. The ant walks large distances but never reaches the position on the worm represented by the stationary green segment.

The key point to make here is that although the ant is perfectly capable of passing any division site, each time it does so additional division sites pop up in between the ant and the distant position it tries to reach.

Now this accelerating worm growth provides a suitable analogy to our expanding universe. Replace the ants by photons and the growing worm by expanding space, and you immediately recognize photons send out into space can not reach every position in the universe.

Although a universe undergoing accelerated expansion will never come to an end, in a certain way we are already 'more than halfway thru'. Again, an analogy is in order.

Imagine a a game of chess played on a board composed of infini-stretch rubber, a magical material that stretches without limit. The board is pulled at its edges so that the whole board undergoes an accelerated expansion. The pieces move over the board at constant speed, and each next move will therefore take more time then the one before. Time will never come to a halt, and the game will continue forever. Yet, depending on the nature of the acceleration, the number of moves remaining may be finite.

In the universe we live in, we have entered the end game. The number of moves remaining is limited. All because of the accelerated expansion. An acceleration we were unaware of less than twenty years ago.