You are about to hear a huge sigh of relief from the entire science journalism community, because Alan Alda, a man who can interview E.O. Wilson and Jim Watson with ease, who hosted the terrific Scientific American Frontiers, and founded the Alan Alda Center for Communication Science at Stony Brook University, has trouble communicating.

You wouldn't think so. It certainly surprised me. The second time I met Alda was at the Geffen Theater in Los Angeles a few years ago, where he was putting on his play about Marie Curie ("Radiance: The Passion of Marie Curie"); his favorite scientist, he said. I went there to interview him and we had lunch in one of their stately lounge rooms and I mentioned I was working on my first book and asked him how many drafts he had done of the play and he replied he stopped counting around 70, because they weren't major, so he started using A, B, etc.

Let that digest for a moment. This is from the first time I met him, at the World Science Festival in 2009. He is thrilled to be with our mascot, Bloggy. But who isn't?

Seventy drafts is not what you expect from someone who doesn't feel like they don't know how to communicate. Or maybe it is. If you feel like you have a vague sort of "impostor syndrome" (I do - and if you are a science writer and say you don't, you are only fooling yourself) you are going to work hard to get it right. Before any interview I have ever done, I have prepared a great deal because the last thing I want is someone rolling their eyes. A journalist friend of mine, Greg Critser, tells the story of being sent to interview physicist and Nobel laureate Murray Gell-Mann and promptly being thrown out. As Critser said in hindsight, Gell-Mann also did something a good communicator will do. He told a young arrogant journalist, who thought he was doing a scientist a favor and giving them 'free publicity', exactly what he had done wrong, and when he could come back.

I've done that since. Interviewing someone I consider a gifted communicator like Alda, there was no point in false modesty. I plainly told him that, given his ability to as an interviewer, if he felt like he needed to answer the question I should be asking instead of the one I did, to go ahead and do so. He laughed. Who knew inside he was just as worried about being able to keep up with me?

Well, he is, and that is one of the great things about learning from someone who will do the work to explain why communication is so difficult. Like Critser, he didn't know it was difficult. He was confident - at first. Making a huge blunder right away is the surest way to calibrate your own expertise. And it helps to let the humor of things shine through when it's merited.

Laughter is the shortest distance between two people - Victor Borge

After reading his new book, If I Understood You, Would I Have this Look on My Face? My Adventures in the Art and Science of Relating and Communicating

, you will have some sense of his anxiety as well. Even if I couldn't detect it. Why was it not apparent? Because I felt like he was so skilled at interviewing that even while being interviewed we didn't have an interview, we had a conversation. 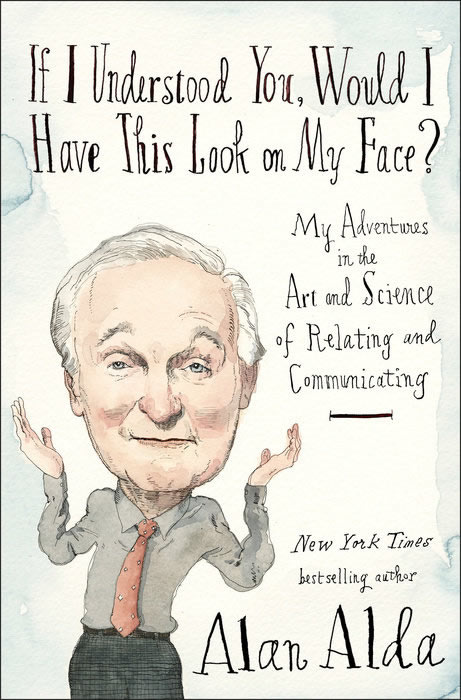 Like the book, he is funny or deep from one minute to the next. He lays bare his beliefs, even when he knows they don't always jibe with what his more reductionist proclivities might entail. But this is not a woo self-help book for budding journalists. He notes how theory of mind and empathy have become new-age synonyms for faux sympathy. In the place of cloying platitudes we get brilliant insights from people he discusses, like, "And, ultimately, what emerged was that I helped her understand death--and she helped me understand how to be a better doctor".

Everyone wants a take-home message, and it has that as well. You can get a more thorough understanding of it when you buy the book.

It all shows Alda has clearly grown as a communicator despite his impostor syndrome, to where he looks so comfortable he is in the running for greatest scientist interviewer of all time. What about the rest of us? I suppose we have to continue on our way. There's hope. A few weeks back I took a car back to the apartment I keep in Manhattan and the driver and I talked. At the end of the trip, he asked me, "Are you a journalist?"

Some of the time, I replied, and why did he ask?

So maybe I am halfway there.

Hank Campbell is the President of the American Council on Science and Health, and this article originally appeared in longer form there. You can read the original article too.