Hank Campbell
Given the political demographic of the webzine Alternet and its anti-science mentality, it's not a huge surprise that its contributors are in common cause with the Russians and others who are merchants of doubt about American science and medicine.

What is shocking is that Alternet displays them so prominently.

If you are not familiar with it, Alternet is basically InfoWars of the far left. If you are working at an industry front group like Organic Consumers Association (or one of its puppet attack fronts like Sourcewatch or US Right To Know) you can always count on Alternet to carry your press release shrieking about Monsatan or whatever. It isn't read by anyone in mainstream media but it is read by the anti-science activist base. And that may be why attorney Ellen Brown is attacking Bayer there yet again.

With Bayer buying Monsanto, the environmental community is about to lose its favorite target in Monsanto. Bayer is adored in Europe (and BASF is untouchable because of its importance to their economy) so Monsanto and Syngenta are all they have left. But Syngenta has been bought by ChemChina and activists suddenly love China (and, ironically, globalization) because President Trump has been critical of both so it will be hard for them to figure out where to go for fundraising next.

That may account for their confusion and for why not all anti-science lawyers have gotten the message from on high that Bayer is not to be criticized. Or maybe they are letting one person criticize a company Europe loves so they look diverse. Or it may be that Attorney Brown really just hates American scientists and doctors that much. And maybe Alternet does too.

Attorney Brown's anti-science article goes right to swinging at virtue signaling softballs. She invokes Elizabeth Warren, who while being adored by activists is so inauthentic her equally anti-science opponent is campaigning as "the real Indian", she babbles something incoherent about neonicotinoid pesticides long after the Beepocalypse stopped being a thing, even claiming they have wiped out birds. (1) Then she invokes glyphosate and links them to cancer and Hep C and every other disease, because that always sells to crazed hippies.

None of what she claims is right. It is not even wrong.(2) That is how little she understands what she is talking about when it comes to science. But science is clearly just a veil.

She invokes a vast corporate conspiracy for science, throwing out alternative history about Bayer mixed in with just enough facts to make it entertaining fiction, kind of like a Dan Brown for science. The Rockefellers. Farben, Henry Kissinger, you name it, she drops them in there.

She's the science version of the crazy Scottish father Mike Meyers portrayed in "So I Married An Axe Murderer", except so kooky she's even funnier:

I never went to tell an attorney they are wrong, I can't tell you how many times attorneys have threatened to sue me because they've been wrong, but she is not writing alternative history fiction, so she is just wrong and the audience needs to know it. Even on Alternet.

We hate to break it to you, Alternet, but I can't even get five scientists to agree on lunch. Therefore:

We were early in documenting how the Kremlin was using its propaganda outlets like Russia Today (now wisely rebranded as RT.com to try and fool people about its agenda) to undermine American science and technology for their gain. But it did not originate with us, it originated with James Clapper, the Obama administration's Director of National Intelligence. Fossil fuels are Russia's top export so it made sense they would be using environmentalists to undermine American natural gas (fracking), and that meant it also made sense for them to be promoting fear and doubt about Russia's second largest export: food. 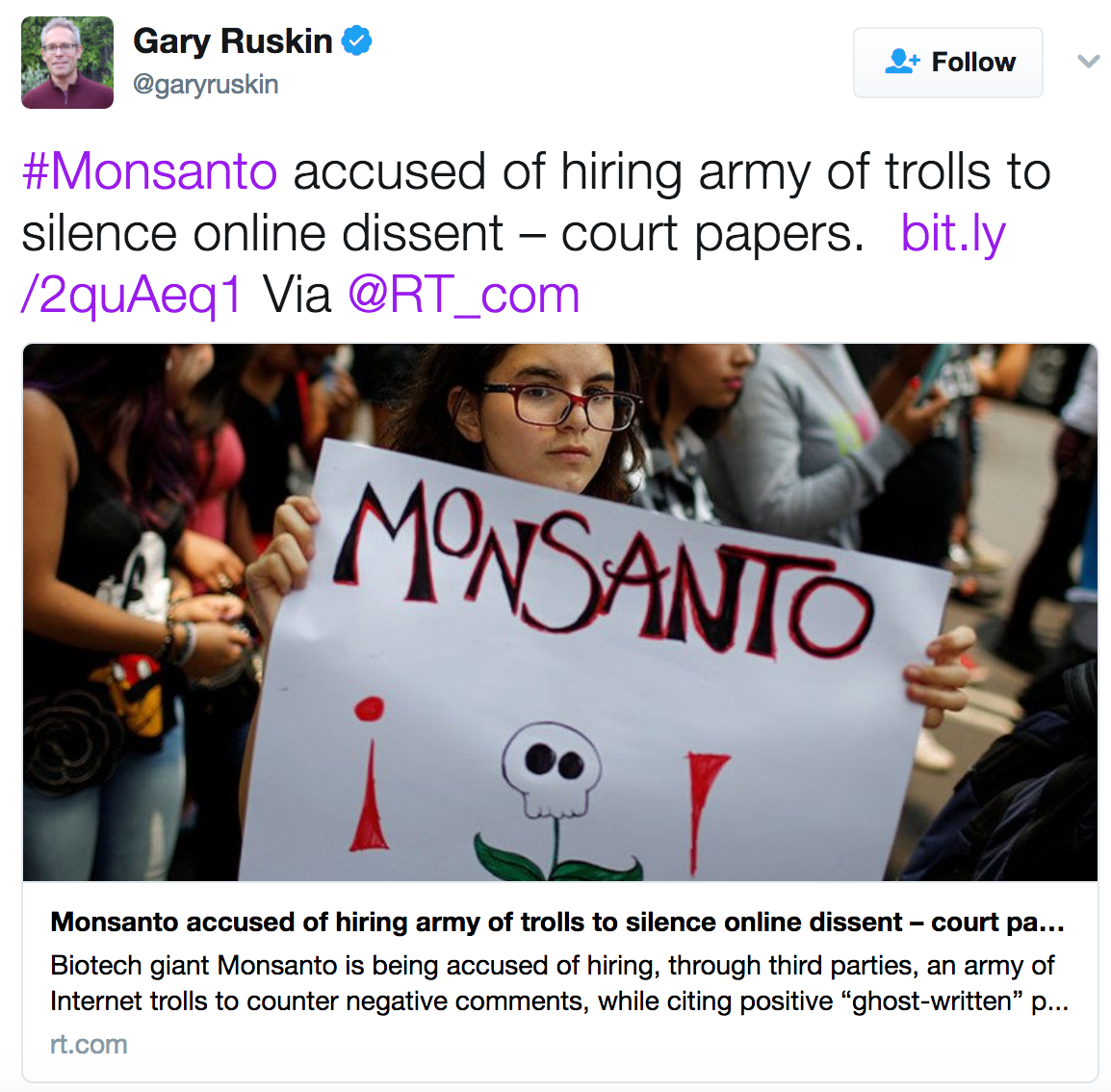 One example of an anti-science activist giddy that he got Russia Today to do his bidding. Because he is a "useful idiot" rather than overtly helping Putin, Gary Ruskin of the organic food trade group US Right To Know does not realize he was doing their bidding.

Attorney Brown lovingly coos about Russian organic food - because she can't do any simple math and determine it is just propaganda, they will starve if they actually switch to organic. Like most things Russian, if they claim to be 100 percent organic by 2020, they are lying. But gushing about them apparently serves her agenda, and she serves theirs.

This one is a little trickier because Attorney Brown does not take the Alternet approach to vaccines and 'teach the controversy' she just engages in anti-vaccine dog whistles about 'FDA and Big Pharma conspiracies'. She even invoked colonization on a conspiracy site in 2016.

And if you look at the server information for her Public Banking Foundation website, you see something interesting.

She doesn't own her own domain.

The registrant name is instead Christapher Cogswell of the Brighton Foundation. And they seem to have only one project in five years: a webinar on an organic lifestyle and cleansing approach to “CONCEIVE AN EXTRAORDINARY CHILD IN A TOXIC WORLD". 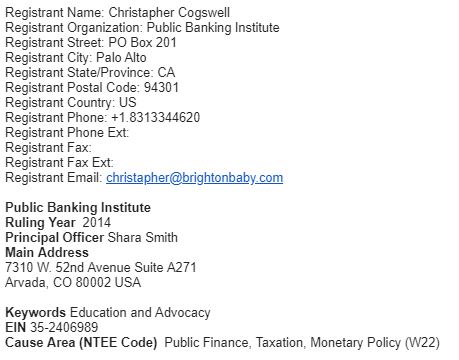 What the heck is that? According to them, "The Brighton Method provides you and your partner with an integral roadmap to take charge of your reproductive health. There are many advanced methods and clinical procedures that are appropriately not included here, but that are included in The Brighton Method Certification Program for health professionals."

So they sell a "certification" if you agree with their beliefs about " the hidden dangers of processed foods, contaminated drinking water, pesticides, heavy metals and other toxins, “electrosmog”, genetically modified foods, antibiotics, the honest pros and cons of vaccines, and more."

This is clearly anti-vaccine virtue signaling and standard practice among anti-science activists of all stripes. Who else claims to be pro-vaccine but hates vaccines? Robert F. Kennedy, Jr., who I had to help both Presidents Obama (here) and Trump (in the Wall Street Journal) throw out of their circle after he cozied up to them. Andrew Weil, one of the Four Horsement of the Alternative, also claims to love vaccines while selling alternatives. Most famously, Jill Stein, who has an actual advanced degree, did the same thing to the delight of Alternet readers that flocked to Reddit.

So Attorney Brown's site was created by someone who is anti-vaccine and sells a homeopathic alternative. Literally magic water in place of medicine. 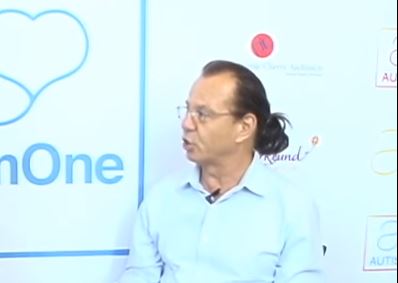 Here is a review of Dittman's work by a clinical homeopath, whatever that is, in California (naturally). ""Roy Dittmann does an extraordinary job of fully exploring triggers for Autism and ADHD. His research packed book provides clues about how your future child may be impacted and offers up simple, straightforward preventive solutions. As a homeopath, I utilize the homeopathic vaccinations recommended in Brighton Baby for my clients. I highly recommend this book for parents considering having children as well as those with children anywhere on the spectrum.""

Roy Dittman, who refers to himself as "Dr." on his website, is actually an OMD - which means he bought a doctorate in Oriental Medicine and claims he cured his son's autism with organic food. Which got him an endorsement from fellow vaccine lover-while-denier Joe Mercola, also not an MD.

So how did this Brighton foundation end up starting an organization devoted to socialist bank systems that now claims expertise in toxicology. biology and chemistry? How did Attorney Brown suddenly get a whopping 500% increase in donations in their 2016 fiscal year, the same time the Russians were secretly funding so many groups using politically sympathetic foundations, when she only works 20 hours per week?

We may never know. The one thing consistent about anti-science activists is they only want transparency for everyone else.

If you care about science and health, Alternet, really care, stop publishing people like Brown and Stacy Malkan and everyone else who is just out to exploit your audience for profit. Leave them to the Sputnik and Russia Today crowd.

(1) How? What biological mechanism makes that plausible? Well, none, but if Alternet readers knew any 8th grade science they'd read Science 2.0 or the American Council on Science and Health or just about any place else instead.