Hank Campbell
When eco-terrorists destroyed a sugar beet field in Oregon a few years ago, the local organic industry group there said they were shocked anyone would be violent, even though the organic industry there demonized science daily. The attackers could not have been unknown to local groups, it is certain they were part of the community.

But how did they switch from misguided - mutagenesis chemical and radiation baths can be certified organic but GMOS are an abomination of nature - to violent?

A new paper tackled the issue in the context of the Capitol Hill riots a few months ago and while they get a little emotional in their framing - neither group is like Hamas or Al Qaeda - it could only be due to cultural differences that they aren't more similar. Perhaps if they were raised in cultures where bombings and hatred are common they might be in those groups.

Can you predict it?

Sort of. We know in the cases of random gun shootings that prescription psychiatric medication will be involved but it would be pointless to monitor every person in America who takes Xanax. Some groups, like the KKK, are known enough that beliefs about participants will be valid almost all of the time but they joined the group because it matches their beliefs.

So how do new groups arise? That is trickier. Group success is nonlinear - want to guess how many big companies spent a small fortune trying to duplicate the success of Science 2.0 and failed? - but the new paper believes a nonlinear inflection point can be predicted using a shockwave equation. Like that new Theory of Everything we get every few years, it will sound science-y enough to get into Rolling Stone but people who know what they are talking about are more skeptical.

Like any equation, to predict the future you first must model the past - but that opens itself up to a lot of confirmation bias. In order to make an equation like this, you need a lot of assumptions, and if you are assuming things about groups - that by joining a conversation of such groups you are one of them - the results are likely only to be accepted by people who already think Earthjustice militants are noble rebels but Proud Boys are terrorists. In other words, they filter decisions through politics they already believe. The Institute for Data, Democracy&Politics at George Washington University claims to cover disinformation but none of their reports or white papers covers disinformation when it comes to energy or food, even though they have a fixation on creating a Russian conspiracy when it came to Donald Trump. It is well-established that Russia uses offshore anonymous donor-advised funds to support groups that are out to undermine America that way. China has given individual academics millions of dollars to promote Chinese labs. Yet where is the paper on the disinformation from them?

And these blinders are not only on, they were created to create illusion. The authors didn't sort through bulk data from Twitter or Facebook or 4chan, they manually chose social media pages to read. That is a giant red flag. Then using the data they went out of their way to manually create, they created an equation.

Population metrics are okay for broad claims but, like Body Mass Index or other abused standards, they are useless for individual predictions. The FBI uses a brute force approach and gathers everything and then parse out items of interest to make individual predictions - X is on medication and belongs to the KKK and just bought a bunch of guns is a red flag. This does the opposite and parses items of interest and extrapolates that out to populations. X talked in this group and owns guns so gun owners are like Muslim terrorists.

They manufacture ideas of collective chemistry from things the individuals have in common - gun ownership, varying belief that we are on the verge of a new civil war -  even though the members of the group have nearly nothing in common. Libertarians are not the same as nihilists and social conservatives, unless you also think the same person can be a Stalinist Maoist Trotzkyite. They then map one group that few have even heard of - Boogaloo Bois - to something everyone has heard of; the Islamic terrorists in ISIS. 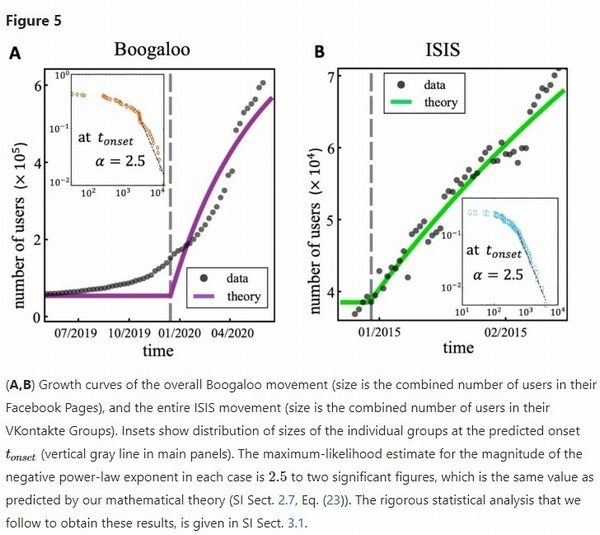 The curves almost match! Well, that doesn't mean much. Unless you also believe that food that paid a fee to use an organic sticker causes autism. It's really easy to create spurious correlations, especially if you are trying.

And this is spurious. While two Boogaloo Bois were later arrested, one was for inciting a riot in Louisvile, not Washington, DC, and firing a rifle. The second was arrested for open carry of a pistol in Kentucky.

The premise also veers into false equivalence. ISIS terrorists kill thousands per year. During the Capitol Hill riots one person was shot but it was a rioter, by police. There were obviously violent outbreaks and one police officer attacked later died. But Oregon had violent protests for over three solid months and no one was creating equations about how progressives become so militant - in the same state where eco-terrorists attacked farms.

The skeptical goggles need to be placed firmly when months of attacks 3 months earlier don't inspire academics to give their credit card to a publishing company but a relative pittance when it comes to 'right wing' groups does.

Does this provide a way to model the arc of militant violence? Not really. The authors want to make it empirical but for validation fall back on sociology that matches the beliefs of the model they want to create. That is the opposite of how real science works. Unfortunately that is exactly how political science does work.
Science 2.0
More Articles All Articles
About